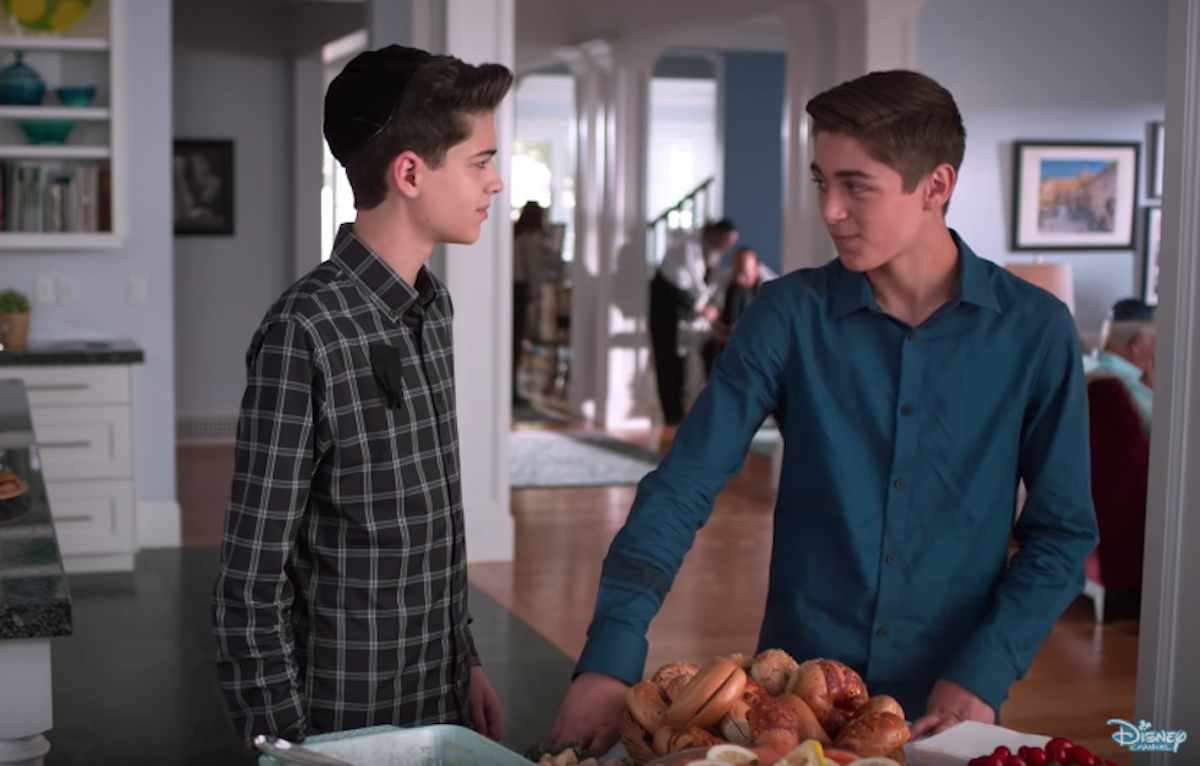 If you and your tweens are not watching the Disney Channel show Andi Mack yet, you need to start ASAP. It deals with so many different kinds of identities, including Jewish identity, in a way not usually seen on TV aimed at the pre-teen set.

Andi Mack is the first Disney Channel show to focus on an Asian American family — and it’s broken new ground for the Disney Channel time and time again. The premise is that Andi (Peyton Elizabeth Lee) discovers that Bex (Lilian Bowden), the woman she thought was her sister, is really her mother, and the people she thought were her parents are her grandparents.

Though the show doesn’t talk about premarital sex outright, the fact that it has a character who was a teen mom already gave this series game-changer status.

Since then, in its three seasons so far, it has dealt with everything from sexuality to gun safety to anxiety. And in last Friday’s episode, “One in a Minyan” (even the episode titles are smart!), Andi Mack achieved another major milestone, and it happened at a shiva, no less.

Cyrus Goodman (Joshua Rush) is the first openly gay main character in a Disney Channel series (yes, another first!). The series had previously — and sensitively — handled his coming out to his best friends, first Buffy (Sofia Wylie), then Andi (at his bar mitzvah — sensing a theme here?).

But in both those instances, he spoke about having a crush on their friend Jonah Beck (Asher Angel); he didn’t actually use the word “gay.” At his grandmother’s shiva, however, he regretted never telling her, so he decided it was time to come out to Jonah. At the buffet table, he was explaining all the food items — kugel, lox, and so on — then simply said, “That’s gefilte fish. Skip that. And I’m gay.”

That’s the first time a character on a Disney Channel ever said the words, “I’m gay.” Jonah’s response? “Yeah. OK. Cool.” It was a beautiful moment of acceptance in the most haimish way possible — in front of an enormous spread of Jewish comfort food. Think of how many Jewish gay teens watched that and felt seen.

If you need more convincing, here are nine reasons we can’t get enough of Andi Mack.

1. It teaches kids about Judaism beyond the token bar mitzvah episode.

If there is a Jewish character in a tween show, it will be typically be acknowledged once or twice — maybe a bar mitzvah episode, maybe a Hanukkah episode. As we mentioned, Andi Mack‘s bar mitzvah episode was epic — though the series touches on less frequently discussed traditions, too. “One in a Minyan” really showed how Jewish people grieve. The characters spoke about covering mirrors during a shiva, and Cyrus explained explained what a minyan was as they recited the Mourner’s Kaddish. To top it all off, there was a funny subplot about kugel. Kugel!

2. Acceptance is a constant theme.

There are many forms of diversity in the show and it is constantly celebrated. In addition to accepting Cyrus’s sexuality, there’s a delightful season one episode in which Buffy is asked to straighten her curly hair because a student complained it was blocking his view of the blackboard. At first she complies — but then she stands up for herself and her hair like the badass she is. Ten out of 10 curly-haired Jewish women can relate to this!

Jonah, the seemingly laid-back ultimate frisbee-playing guy suffers from anxiety, just as many children and adults do. You can’t always judge the cool boy by his cover.

4. The way it depicts male friendships is so healthy.

Andi Mack’s male characters are often vulnerable with each other. Before Cyrus came out to Jonah, Cyrus helped him through a panic attack. The best way to fight against toxic masculinity is for young men to see role models like these.

5. It deals with these heavy topics without making them “very special episodes.”

Sometimes children’s television can be so hit-you-over-the-head with its messaging that it seems inauthentic, but Andi Mack always manages to work these plotlines in in an organic way.

6. That said, when episodes deal with difficult topics, they often include PSAs from the cast.

These are simple and effective and they are great conversation starters if you are watching with your kids. Watch the gun safety and communication ones to get an idea of the range.

7. It is educational AND entertaining for children AND adults.

I’m in my 30s, and my sister is in her 20s, and we have conversations with our mother about the show every week. It really is for all ages. Just try not to get invested in the relationship between Bex and Andi’s dad, Bowie (Trent Garrett). I dare you.

8. Bex and Bowie are not perfect parents, but they’re trying.

Andi was 13 when she found out who her real parents are, and Bex and Bowie are still learning how to fit into these roles. They definitely make mistakes, but they love and care about Andi and it’s inspiring to watch them grow.

9. These teens are great actors.

We won’t won’t name names, but some child actors can be seriously obnoxious — so it’s a miracle that every actor on Andi Mack is talented and not at all annoying. They have to handle some difficult scenes and knock it out of the park every time. Give Joshua Rush an Emmy already!