Finally, We Have a Bagel-Themed ABC Book for Kids – Kveller
Skip to Content Skip to Footer

Finally, We Have a Bagel-Themed ABC Book for Kids 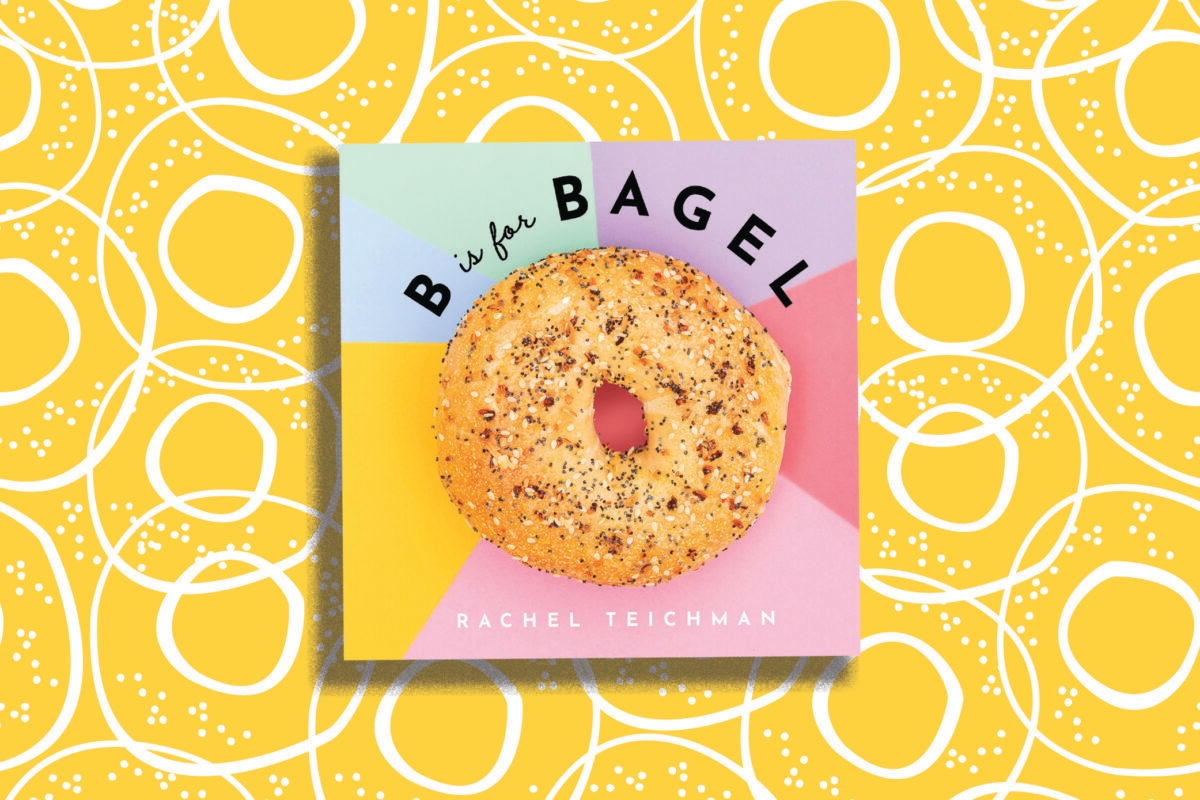 It’s February 9, which means it’s National Bagel & Lox Day! While some would argue the day isn’t really a holiday, we are always happy to have another reason to eat bagels. And we’re getting a special bagel-themed present this year — “B Is for Bagel,” a new delightful, colorful, bagel-themed ABC book that’s an ode to the round doughy delicacy beloved by American Jews (and anyone who has good taste in food, let’s be honest).

This toddler-friendly book was created by Rachel Teichman, a mother of three and freelance writer who lives with her husband and three kids in Houston, Texas “where the bagels are delicious,” as she claims in the book.

“B Is for Bagel” has a simple, easy to navigate and super cute design, with each bagel featured on a vibrant pastel background and an adorable bagel print on the endpapers.

The book opens with a little poem that recounts all the different steps in the process of making bagels with cute rhymes: “Splish! goes the water that is boiling in the pot. Splash! go the bagels. Watch out, it’s very hot.” It then matches a bagel or a bagel-related item to each letter of the alphabet.

Finding a bagel for every letter wasn’t an easy feat, but Teichman got creative (x is for “xtra schmear,” which we’ll take, because who doesn’t like more schmear on their bagel). “I and Y were the hardest letters,” Teichman tells Kveller over e-mail (they’re for Italian and yeast, respectively).

It was Polish Jewish immigrants who brought bagels to the U.S. in the 19th century. The delicious bread, which is possibly a descendant of the german pretzel, was invented in Poland in the 17th century.

According to The Nosher, bagels were “sold on the streets of New York City’s Lower East Side stacked up on poles or hung from strings — that’s why they have a hole — for people to buy and enjoy on the street.” Bagels are traditionally boiled, then baked in a hot oven — the boiling actually keeps the bread fresher for longer. Traditional bagel toppings include poppyseed and sesame, both of which are featured in the book.

Of course, the bagel has changed and morphed a lot in that time — with inventions like the hot Cheetos bagel and the rainbow bagel. Teichman believes that these new flavors are a good thing, and celebrates them in her book.

The book mostly uses bagels from the Bagel Shop Bakery in Houston, but she also hunted down eclectic bagels in shops around the country. It has all the classics — “e is for everything,” “g for garlic,” and some other unusual bagels, like the unicorn bagel and the vanilla berry bagel — which Teichman found at the Brooklyn Cafe in the Woodlands, Texas.

And yes, before you ask, the book does give the letter B to the controversial blueberry bagel, which, whatever you think of it, is the most popular bagel flavor in the country, at least according to GrubHub.

“I really think the innovation is what keeps [bagels] top of mind for people who may not have grown up with them,” Teichman explains. “You have to change to stay relevant, right? As long as we keep the traditional flavors, too.”

As for Teichman, she loves “a warm fresh whole wheat bagel with strawberry cream cheese. Or any bagel with plain cream cheese, sliced cucumbers and salt.”

Yet, despite her love for bagel ingenuity, there is one place where Teichman personally draws the line: “I don’t love the idea of bacon on a bagel, but to each their own.”

This book is all about sharing the bagel love with your little ones, a long-practiced Jewish tradition honored by Teichman herself: She introduced her kids to bagels “as soon as they could eat any significant foods.”

Now that her kids are older, she bakes bagels with them at home, and their family has many cherished bagel-related memories: “When my daughter was 2, she was eating a bagel at the park in Oakland, and duck came up and grabbed it from her. She liked to say: a duck ate my bagel!”

For those of you looking for a fully immersive bagel experience, the book ends with two bagel recipes. One is for a more complicated boiled traditional bagel, and one is a simple, kid-friendly “quick bagel” — because after seeing all those appetizing bagels, you and your little ones will definitely be craving one soon.

You can buy “B Is For Bagel” on Amazon or Bookshop.org