For Jews, ‘Where Are You From?’ Can Be a Difficult Question to Answer – Kveller
Skip to Content Skip to Footer

For Jews, ‘Where Are You From?’ Can Be a Difficult Question to Answer 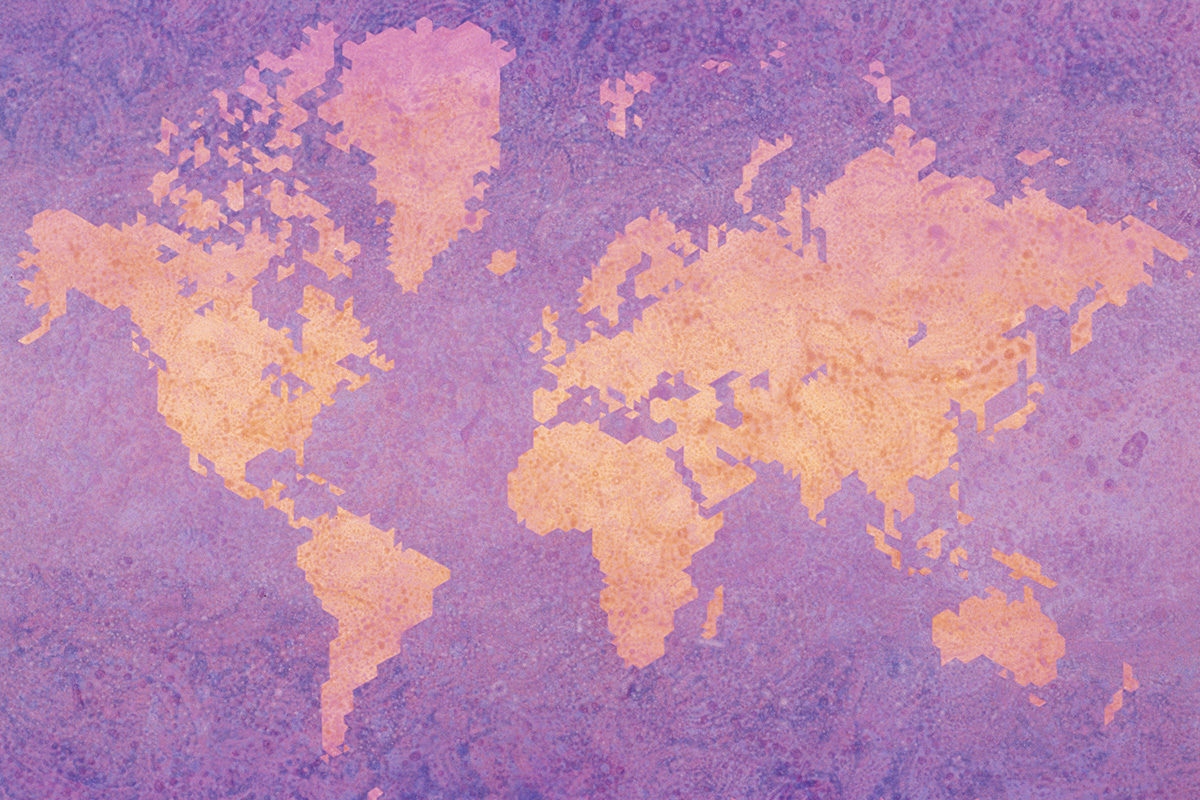 We’re at our local elementary school’s International Dinner, where each family at our public school brings in a dish that represents their heritage. It’s an attempt to put a kid-friendly spin on learning about other cultures. The sweltering gym is filled with tables overflowing with foods grouped by region: Asia, Africa, Europe, South America, Caribbean, and more. The smells of tamales, curry, dumplings and shepherd’s pie all blend together.

I’m standing behind the Jewish table, serving up tastes of noodle kugel — both with and without crushed Corn Flakes topping — matzah kugel, cold latkes, and mini pastrami sandwiches.

My excited 4th grader comes bouncing up to me, balancing a plate piled high with food in one hand, holding a slice of Irish soda bread with the other. He takes a bite of the bread and mumbles, “Where are we from?”

He gestures to the front of the gym, where there is a giant map of the world. Next to it is a pile of star stickers, with instructions for kids to put stickers on the countries where their ancestors (or they) were born. Which is why my son keeps insisting, “Mom, where are we from? I want to put my star on the map and go eat.”

It sounds like a simple enough question, but I’m not sure what to say. My husband and I, as well as our parents, were all born in New Jersey or New York. We haven’t strayed very far from where we grew up. But like many American Jews of Ashkenazi descent, most of my son’s great-grandparents and great-great-grandparents come from a mix of Eastern European countries: Poland, Russia, Latvia, and Romania. However, none of those countries really explain who he is, or where we are from.

As I put a latke with applesauce on the plate of a wide-eyed 2nd grader, my mind goes back to my childhood living room. I was about my son’s age, and I was interviewing my grandfather for a family history project.

“Grandpa, where are you from?” I asked him.

I think he doesn’t understand the question, so I ask it in a different way. “Yes, but where were you born?”

But he understands just fine and repeats his answer: “I’m Jewish.”

That’s when I start to get frustrated. I want to be done with the assignment and go play with my sisters. “The paper says, ‘Where is your relative from?’ not, ‘What religion is he?’”

My grandfather gets frustrated, too. He looks me right in the eye and speaks slowly: “I was born in Poland, but the people in Poland didn’t consider me a citizen. The government put ‘Jew’ on my passport. They wouldn’t let me do anything Polish people could do. They kept all the Jews separate.”

He takes a breath and adds, “They did not consider me Polish, so I’ll never consider myself Polish, either. I’m a Jew.”

In that moment, I was confused about how to react. Before that day, my grandfather had never told me anything about what his life was like before he came to America. And he didn’t seem eager to talk about it then, either. I remember wanting to know more but feeling unsure about what to say, or how to ask. So, after pausing a moment to see if he would continue, I went on to ask the next question from my assignment.

Years later, I learned more from my parents. They told me that my grandfather grew up in a shtetl in Poland. His father died when he was young, and his mother and sister owned a fabric store. He went to school and knew better than to leave the confines of his community, as Jews were often bullied and attacked.

When my grandfather completed his schooling, he was fortunate enough to go to America to visit his uncle; the plan was he’d return to Poland and help run the store. This was 1939, however, and shortly after he arrived here, Germany invaded Poland. Unable to get back to his family, my grandfather got a job in a shipyard, hoping to send money to his mother and sister so they could escape.

This did not work as planned. My grandfather’s mother and sister lost everything — including their lives.

Suddenly, I’m snapped back to the present by my son, who has lost his patience with me. “Mom! Where are we from? Where should I put my star on the map?” I look at him, and then at the sign on our table. It says “Jewish,” not “Eastern European.” I was part of the committee that organized the dinner, and we had decided to create a Jewish table because the food didn’t seem to belong anywhere else.

Our decision to create the Jewish table was, in part, defined by who we are not: We are not Polish nor Russian. But I realized at that moment that the Jewish table is just as much about who we are: It is a cultural heritage — and not a national border — that unites us Jews. Though “where we are from” isn’t easily represented on a map, it is clearly evident in the community of people who brought food to the Jewish table that night.

So, I smile to my son. Much to his relief, I begin to answer his question: “Well, your great-grandfather was born in Poland, but…”

“Thanks!” he interrupts. Then he races to put a star on Poland, and runs off to the cafeteria to eat his dinner.