Give Mom a Break and Treat Her Like Dad 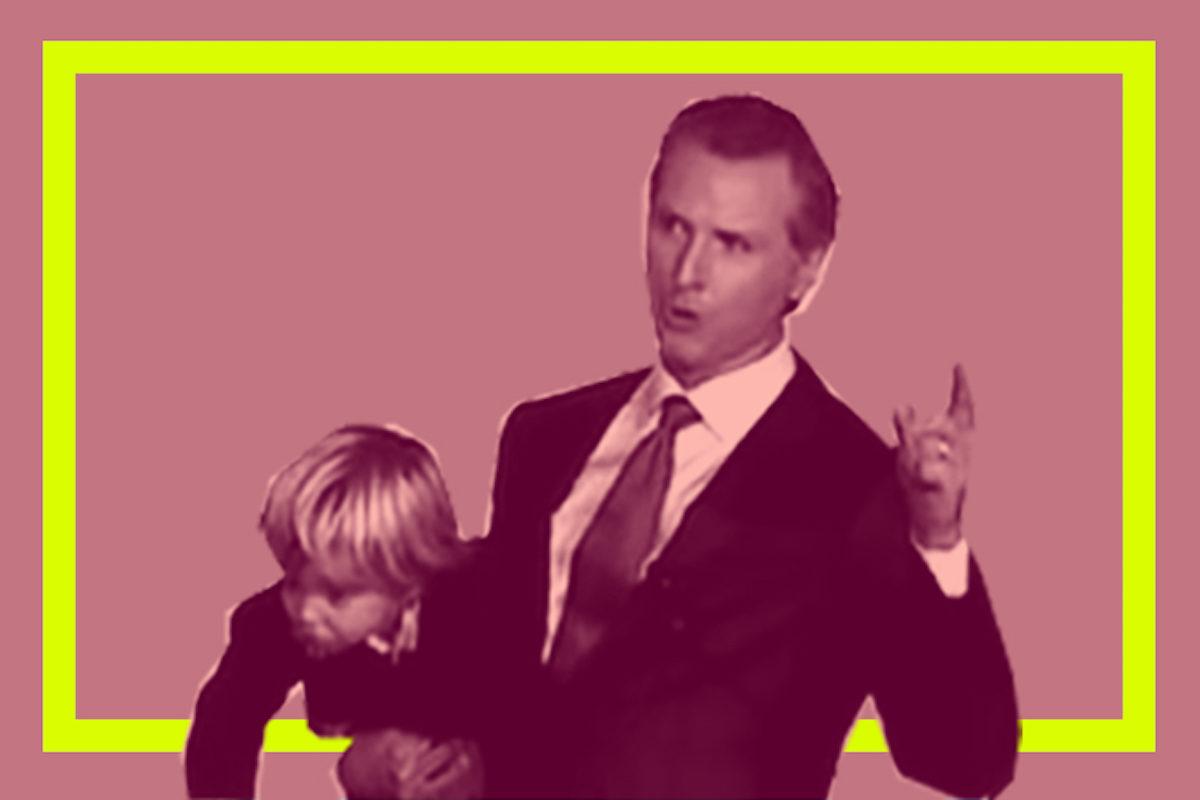 Sometimes, you see a headline in your newsfeed that makes you stop and do a virtual spit take: “Well, THAT can’t be true!” (And by “sometimes,” I mean basically every day, but let’s move on.)

It happened to me when I read the headline of New York Magazine’s story: “Basically Everything Is Improved by an Interrupting Toddler.” As a mother of six kids, I gotta give that one a hard NFW. I feel really well-qualified to speak on this point, since over the past 15 years, I have had basically every single thing in my life interrupted by a toddler, ranging the whole gamut from “my work day” to “sexual intercourse.” And while each one of those interruptions might perhaps seem “totes adorbs” in retrospect, at the time, each one of those interruptions sucked.

So how could anyone even think that an interrupting toddler might be a good thing? The writer of the piece was describing Gavin Newsom’s swearing in as California’s 40th governor on Monday. As Newsom delivered his first inaugural address, his 2-year-old son, Dutch (insert shrug emoji here), wandered up on stage and stole the show. First Newsom picked him up and held him, joking that the kid came up right when he was supposed to. Then Newsom put Dutch down, assuming the kid would leave the stage.

As no parent in the world would be surprised to learn, however, the 2-year-old had other plans. Dutch walked around on stage, hid behind the podium, played a little peekaboo with the crowd, and then mom Jennifer Siebel Newsom attempted to capture him — and again, no parent will be surprised to learn that that was also an epic fail.

Yes, it’s just all SO adorable, just like that BBC interview where the toddler wandered into her dad’s study.

But now I’m going to rain on your parade. Because here’s the thing: The reason why both of these situations come across as “cute” is that the adult protagonist in the scenario is a dad, not a mom.

Because when stuff gets out of control on Mom’s watch? Well, that’s when the Judgy McJudgersons show up. They start spouting unsolicited observations like, “Wow, why can’t she get her own kids under control?” or “Mom, gotta teach those kids how to BEHAVE!” But when kids are kids with their dad in the room? That is SOOOOOOOO CUTE!

I am willing to bet that if a mom were being sworn in as governor of California and the same toddler antics happened during her speech, there would be at least a few thousand commenters who would say something along the lines of, “Wow – if she can’t handle her own kid, how’s she gonna handle a whole state?”

So, why is that? You know the deal: blah blah blah, baseline misogyny, blah blah blah, different standards for moms and dads. It’s not funny, because it’s true. “Jon is SUCH A GOOD DAD,” friends tell me all the time about my husband. This is not only because I am basically his unpaid (and admittedly unsolicited) social media PR person. It’s also because by simply showing up for things — like the occasional carpool or performance or game — Jon has already soared to astronomical heights of Great Dadness. Look at the ode to Brett Kavanaugh written about his carpool-driving prowess and his mad basketball-coaching skills. I will note again that I drive at least six carpools a day, yet have received neither medal nor monument. In fact, it isn’t even deemed worthy of comment: It’s what is expected of a mom.

The standards of being a parent are decidedly lower for dads. They shouldn’t they be, and we also shouldn’t facilitate that lifeview by “awwwwww”ing over dads who are just being parents. Don’t get me wrong: as a friend of mine correctly pointed out, normalizing of parents is a great thing in all professional contexts. But let’s make sure it’s normalizing of PARENTS — not just dads. In other words, ask yourself when you see a situation like this: Would I feel the same if it were a mom who was the protagonist? Would it be written up the same way? And if not, why?

When a dad drags his kid through the airport by the hood of her coat, as happened at Dulles International Airport on New Year’s Day? It goes viral (seriously!), as “the perfect solution to traveling with [a] young daughter.”

Now, as I mention basically every time I put my fingers to my computer keyboard, I have six kids — and you bet your sweet ass there are times I’ve wanted to drag my recalcitrant kid through the airport by her hood, her toenails, or what have you. But if I had actually done it and someone made a video of it? I’d be called “abusive” or “negligent,” not “understandably fed up” or “ingenious.”

The spectacle, posted online, of me dragging my kid through an airport would not be deemed a “clever” and “hilarious” solution to my kid’s temper tantrum — in fact, I’d be willing to put money that I’d spend that night in jail. And that difference, my friends— even if I had been in the exact same airport at the exact same time (even with the exact same kid, why not?) —  is because I am not a dad. The bar is way, way higher for moms — not only the standards we set for ourselves, but those we set for all the moms around us.

All people — men, women, and noncisgendered — have days when the shit hits the fan. And all kids misbehave at times when they shouldn’t. And my wish for 2019 is that we are all more tolerant of one another’s parenting messes, and that people give women the slack they would give to anyone — or, more specifically, the slack they’d give to a dad.