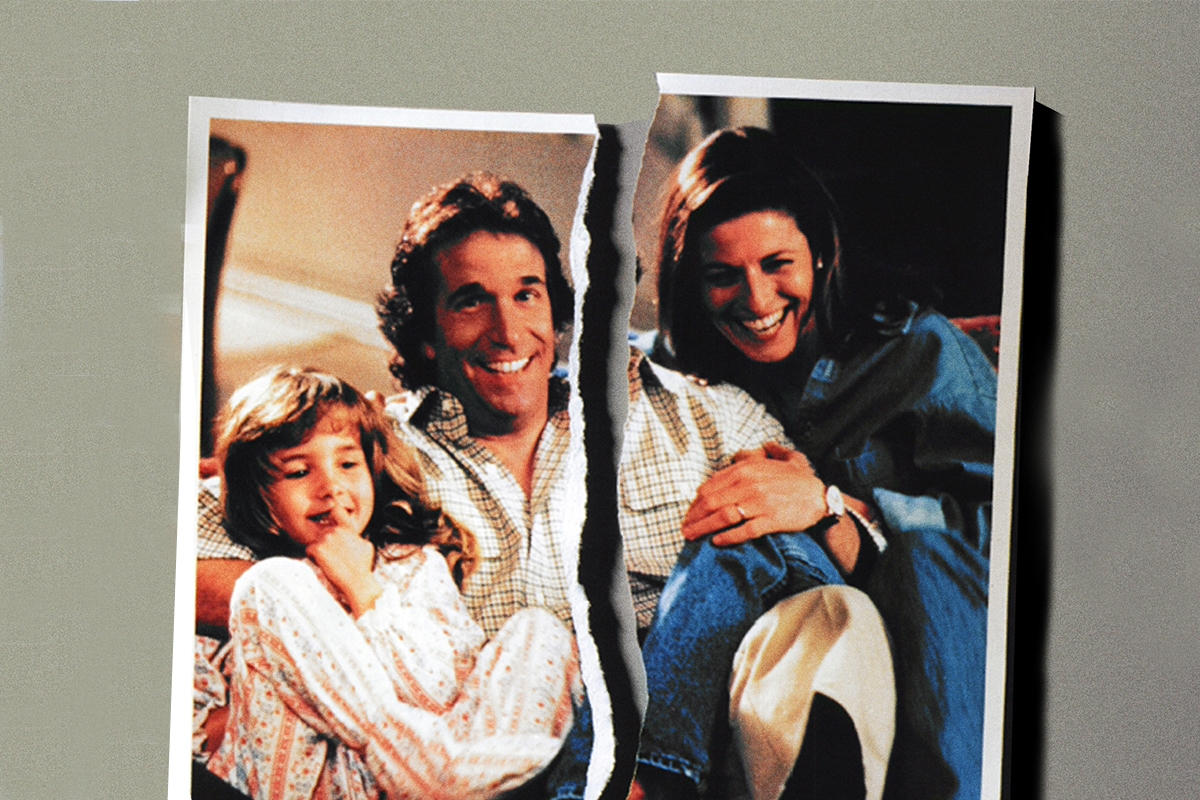 In many ways, “Absolute Strangers” feels like any early 1990s, made-for-TV movie. We have the opening credits with the cheesy elevator background music, the docudrama style reminiscent of a true crime TV episode, the semi-didactic dialogue that leaves little to the imagination and the constant fade-to-black to delineate scene endings.

Yet this 1991 movie, which stars Henry Winkler as a Jewish dad fighting for his comatose’s wife life (he honestly gives a performance that alone would make this movie worth revisiting), is an anomaly. Just like the real court case on which it was based, “Absolute Strangers” drew the ire of anti-abortion activists and the vehement support of pro-choice organizations like the National Council for Jewish Women.

That’s because, to save the life of his wife and the mother of his daughter, Marty Klein, along with a team of doctors, believes that she must have an abortion.

Marty and Nancy Klein already have a young daughter together when Nancy gets into a car crash on the way to work in New York City, ending up comatose while 10 weeks pregnant. After talking to doctors, Marty and Nancy’s parents decide that the best option for Nancy would be to get an abortion; the procedure would give her body more leeway to recover and allow doctors to administer a wider array of medication. While not all doctors agree that it will be a life-saving move (one even glibly calls her a perfect incubator), the only previous evidence  — two instances of comatose pregnant women carrying to term — ended in the mothers’ deaths.

The problem is that the Long Island hospital where Nancy is hospitalized will not allow her family to order an abortion for her without her permission — or without a court order appointing Martin as her guardian.

As Marty tries to petition for power of attorney to give his wife a better chance at survival, two anti-choice activists petition for power of attorney over the fetus — and over Nancy. In the movie, one of the petitioner’s lawyers quips that a stranger might make for a better guardian in this case. This infuriating move made an intensely personal case into a national news story and sent the Kleins’ lives spiraling.

Since this movie is based on a real case, it won’t be a spoiler to tell you that the two strangers who sued for guardianship lost their case. While Nancy’s abortion wasn’t ruled to be medically necessary, Marty did get power of attorney over her, which allowed him to make the decision to have an elective abortion, a procedure that would have been available to Nancy under any circumstances at that stage of her pregnancy, 17 weeks.

A few weeks later, Nancy woke up from her coma.

“Absolute Strangers” isn’t a perfect abortion movie (if you’re looking for a good abortion movie, Jenny Slate’s “Obvious Child” is a pretty great one). It isn’t about a woman taking agency over her body, but about a man trying to make that executive decision for her when she is incapacitated. Marty is also not the paragon of a zealous pro-choice advocate. “I don’t have any views on abortion,” he tells a journalist trying to get him to make a media appearance. “I’m not an advocate of anything.”

He doesn’t seem to care when a leading pro-choice activist tells him that his court case could endanger their cause. “If you lose,” she exclaims, “you’ll do serious damage to the cause of women’s rights.” If Klein had lost his case, it would have set a terrible precedent, allowing others to seek power of attorney over fetuses, and possibly helped legitimize anti-choice legislation.

Still, the movie is clearly pro-choice — or rather, in support of life.

“I made a decision. I will have to live with it. I’m not insensitive. It’s my child. But if we had lost in the court and Nancy was forced to carry the child full term and died — I would have killed,” Marty says in a TV interview scene made even more powerful by Winkler’s understated but emotional acting. It’s a moment that, despite the dated feeling of the movie, still gave me intense goosebumps.

One of the most captivating aspects of the story, and the movie, is Martin’s ferocious devotion to his wife. But when you look up Martin Klein’s name today, the first thing you see is that the couple divorced not long after the case. Still, a 2005 interview with both of them does reveal that Nancy was given a second chance at life after the coma. Of the two men who tried to prevent her abortion, Nancy said, “I feel very strongly that it was my problem, not theirs, and that they had no right to interfere.”

Both Kleins and their parents are Jewish, but that part of their identity is not really a part of the movie, and perhaps for good reason: The one time Klein’s Jewish identity was mentioned in relation to the case was by John Short, who petitioned for guardianship over Nancy.

“People called us Nazis,” he told the New York Times. “But we were trying to save the life of a Jewish child.” These days, as many mention the Holocaust in connection to abortion, it’s clear that many anti-choicers are still willing to exploit Jewish trauma, historical and personal, to earn points for their cause. The Kleins’ story is yet another example of that.

The case presented in “Absolute Strangers” is unusual, and not really an example of a typical abortion. Yet there is one quote from the movie, said by Klein, that feels particularly prescient and universal at this moment even though the movie is more than three decades old. Marty says it in relation to the two men who petitioned for guardianship, but it feels like it could be said about the five justices of the Supreme Court who overruled Roe v. Wade, and about every pro-life activist cheering on this development.

“I respect their right to differ,” he says, “but I do not respect zealots who come in and burn your house down, literally or figuratively. They set fire to our lives as if they had set a torch right to us.”

The stories of those affected by losing access to abortion will likely look nothing like the Kleins’. But this decision will set fire to many lives, and the torch is in the Supreme Court’s hand.

You can watch “Absolute Strangers” on Tubi, and Roku TV.