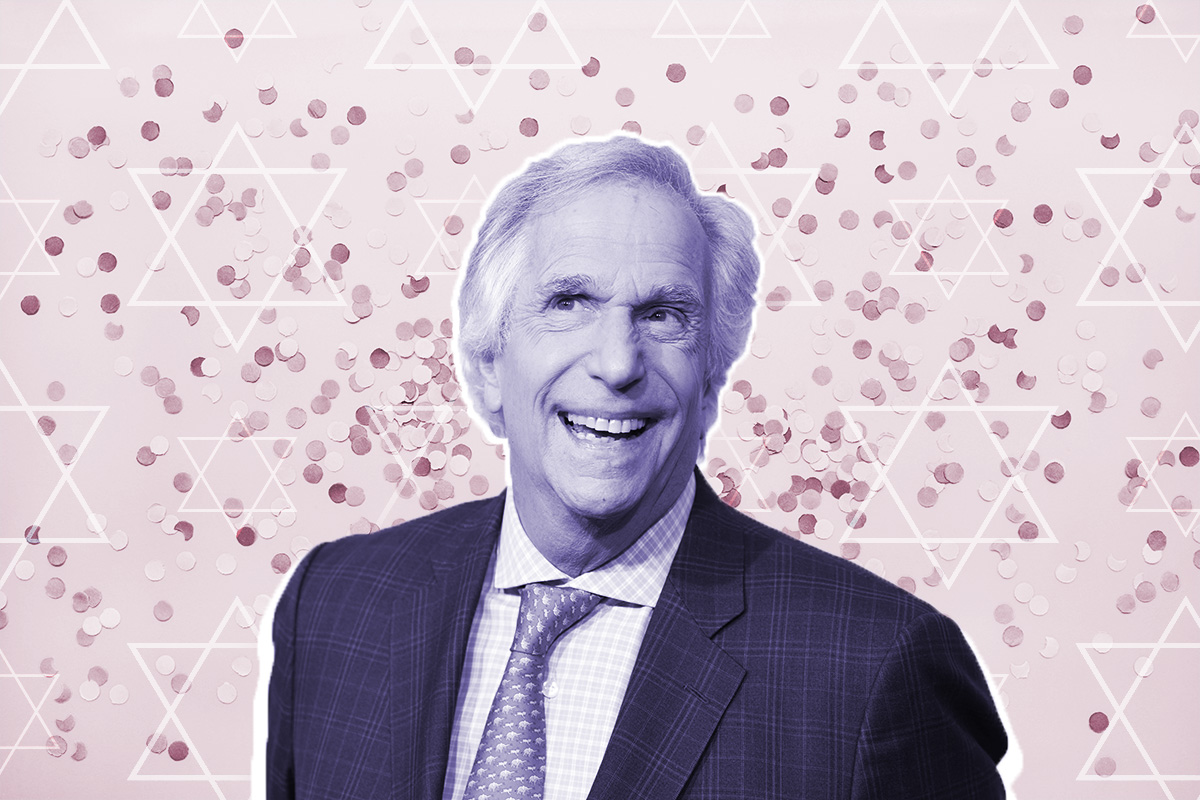 The Internet loves Henry Winkler — and so do we. The Jewish grandfather of six is just a source of pure, unadulterated joy — and according to many a source, a real mensch in real life. Every once in a while, the internet’s zayde (for that is what he is) starts trending on Twitter for adorable reasons — like the fact that he posts the best fishing selfies known to man. I mean, just look at that joy:

The 76-year-old actor also has an incredibly Jewish background and history, so here are 14 Jewish facts about our absolute favorite mensch:

Winkler is the son of German Jews who escaped the Holocaust

In 1939, Henry’s Jewish father, Harry, got a six-week work visa to go to America and brought his wife Ilse along, telling her it was just a short visit. Before leaving the country, he encased some of his family’s precious heirlooms in chocolate, to smuggle them in his suitcase undetected. The family never went back. Winkler says that lost most of his family to the Holocaust, including his uncle Helmut, who was meant to join Harry on his “business trip.”

Winkler’s parents were founding members of the Jewish German congregation Habonim (Hebrew for “the Builders”) in New York. The conservative synagogue was located on the Upper West Side on 66th Street, though it has since moved (fun fact: I had a gig as a Hebrew school teacher there when it was still in its original location). It’s also one of many Jewish institutions the actor has donated to over the years.

Winkler not only was bar mitzvah-ed at the shul, but he also married the love of his life, Stacey Winkler, at the synagogue. The two have three kids, Jed, who is Stacey’s son from a previous marriage, Zoe and Max.

After getting a degree from Yale School of Drama (despite struggling with dyslexia!,) Winkler made it to New York City where he began trying to make a living as an actor. His first paid gig was in the fall of 1970, in an adaption of Philip Roth stories, which, according to the New York Times, was well-reviewed!

He has played many Jewish and Jew-ish characters

While Winkler is known for playing the admittedly not-at-all Jewish Fonz, many of his other roles are Jewish, or at least Jewish-adjacent. He played a Jewish tough kid in “The Lords of Flatbush” opposite a very young Sylvester Stallone. He is widely beloved for starring as the Jewishly named coach Klein in Adam  Sandler’s “The Waterboy.” He’s a cult legend for playing the very Jewish feeling Barry Zuckerkorn in “Arrested Development” and of course, the possibly Jewish Dr. Lu Saperstein in “Parks & Rec,” the father of Jean-Ralphio (Ben Schwartz) and Mona-Lisa (Jenny Slate.)

He also played Jewish New York mayor Ed Koch in the Funny or Die satirical film “Donald Trump’s The Art of the Deal.”

Winkler was recently interviewed at the famous Jewish New York deli about his work on “Barry,” for which he won his first Emmy in 2018, and it turns out he is very methodical about eating a pastrami sandwich, disassembling the top slice of bread to put mustard on it and then eating it open style — “Otherwise I will never get it in my mouth,” he told Thrillist. He’s been going to the deli for many decades, and even brought Ron Howard there in the 1970s while working on “Happy Days.”

The history-making deaf actress and Jewish mom of four and Winkler go way, way back. The two met when she was 13,  when he watched her perform at the Center for Deafness. Matlin was unsure about her future as an actress, and Winkler told her, “You know Marlee, you can be whatever you want to be, just follow your heart and your dreams will come true.”

He later let her live in his house when she was filming “Children of a Lesser God,” for which she won her first Academy Award at 19, and she also married her husband in the actor’s backyard.

Winkler danced to “Hava Nagilah” as Fonz in “Happy Days”

Winkler has the moves! He recently showed them off in a TikTok video with his grandchildren, but he also displayed his dancing skills in their full glory while dancing to Hava Nagilah in an episode of “Happy Days.”

He is cousins with actor Richard Belzer

Belzer, of course, plays one of the most famous Jewish TV detectives, John Munch of “Homicide: Life on the street” and “Law and Order: SVU.” Winkler did guest star in an episode of season three of  “Law and Order: SVU” as a conman.

Winkler is about to star in an exciting Israeli show

Winkler was cast as Tatty in the upcoming very exciting and very raunchy Israeli-American show “Chansi,” about a young Orthodox Jewish woman who goes to Israel to serve in the IDF and experiences a sexual awakening.

Winkler will play the titular character’s religious Jewish father, opposite “The Marvelous Mrs. Maisel” star Caroline Aaron. It’s hard to think of a more perfect role for him.

We’re just obsessed with this picture of Henry Winkler on a camel! Winkler recently visited Israeli for the first (!) time to shoot “Chansi,” and he really kept busy, meeting Israeli celebrities, eating delicious food, and doing all the fun tourist stuff — behold all the wonderful pictures herein.

JEWISH BUDDHISM:::
IF there is NO self ..

Whose arthritis is this ???

Winkler has a spider plant in his home that his family friend, “Tante Erma”, smuggled out of Nazi Germany. He apparently gives clippings of it to friends and family.

“Transparent” creator Joey Soloway apparently used to keep one in their writers’ room while working on the show.

“He came with his family, and I was late, and he was dismayed that they made me work on Yom Kippur,” Winkler told Arizona Jewish Life in 2019. He said that he does celebrate all the Jewish holidays, he does not observe Shabbat, but is “proudly observant.”