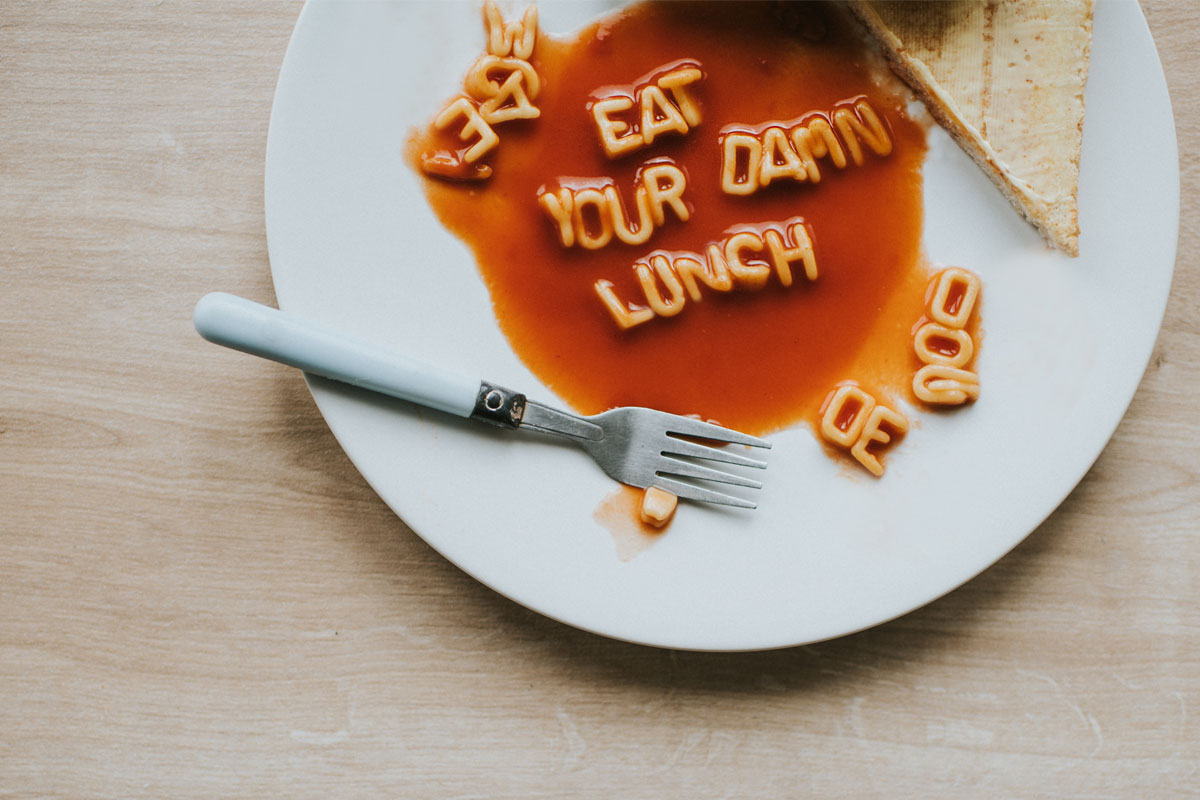 When it comes to feeding my family, I am your stereotypical Jewish mother. I cook lasagna for 10 for my family of three. Every matzah ball soup has to be frozen into several Tupperware containers and lasts for weeks. And every party has leftovers so abundant because “what if we don’t have enough?”

Then there’s my 6-year-old son. You can see all of his ribs; he’s barely gained two pounds in two years and he WILL. NOT. EAT. Unless, of course, it’s gummies, Cheez-Its or pasta.

It’s my fault, of course. When you’ve got curious offspring that asks why grown-ups can tolerate “spicy” toothpaste and soup without ice cubes, and you proceed to tell him the ins and outs of how tastebuds work and evolve over time, you wind up with an intelligent and perhaps manipulative child who ate his chicken and dumplings just fine… yesterday. Today, though, his “tastebuds have changed” and he doesn’t like it anymore. (Insert exasperated eyeroll here.)

This is not our only struggle at mealtimes. Recently, my husband and I listened as the psychologist we had assessing our son said the words we knew in our hearts to be true long before — years before, in fact — any educators ever brought up the possibility in school: “consistent with ADHD.” Rather than feeling our hearts drop or flutter with panic, however, we just nodded in unison and let relief seep into the space between us as we huddled over the phone together. “What’s next?”

How we knew this would be our diagnosis encompasses years of gentle — and increasingly urgent, sometimes screaming — reminders to quit making faces in the mirror and brush his teeth; to stop drawing steam pictures on the glass and remember why he’s in the shower; to stop futzing around in his room and get dressed. But the epitome of our frustration with our son’s attention deficit comes at dinnertime.

Whether he likes the dish du jour has never seemed to matter much. It’s the fact that my child — and as somewhat of a foodie, this is a tough pill to swallow — my child finds eating boring. Imagine that: dazzling your palate with the perfect combination of distinctive flavors and textures is “boring!” He would truly rather be doing anything else. The Macarena. Asking Google to play “O’Reilly Auto Parts” and failing, much to his chagrin (you’d better believe he’ll be roasted with this story at his bar mitzvah). Flitting his fingers across the table. Reenacting, with overly dramatic facial expressions and gestures, something that happened at school. Anything but bringing his tush to the seat and the fork to his lips.

And now we know the reason: His brain just isn’t stimulated enough by the mundane task of nourishing himself, no matter how much ketchup, ranch dressing or parmesan cheese is added to his meal.

Now, I may have been exaggerating what little my child will eat in the introduction just a bit. In fact, my husband and I both beam with pride as we share with other parents the great variety of vegetables he consumes with shocking enthusiasm: peas, asparagus, Brussels sprouts, cauliflower, carrots, cucumbers, bell peppers. A couple of weeks ago, he even shouted out “yay, cooked broccoli!” when it was set in front of him and has declared he no longer needs ranch on anything but salad, pizza and taquitos. Yes, you read that correctly: ranch with his taquitos. (Insert retching sound here.) I truly have no idea where my kid learned this unacceptable eating habit, but if it helps food enter his mouth, I won’t complain… too much.

Plus, when it comes to eating Jewish (or even semi-Jewish) foods, he is making excellent progress while compensating for his need to stimulate his brain. It was about six months ago that I turned around and saw my son, for example, holding a dill pickle horizontally in front of his teeth with both hands, nibbling, chipmunk-like, row after row of its sour flesh as one would while eating corn on the cob. “What are you doing?” I asked him in disgust. “It’s just the way I like to eat it,” he replied, smiling and dropping his mic by slurping up the limp leftover pickle skin with gusto.

Then there’s his penchant for eating lox. My son loves lox and asks for it all the time, despite me repeatedly telling him that due to its high price point, it is most definitely a “once in a while” food. Now, don’t get me wrong. As a Jew and a lox connoisseur, I am delighted that he likes the taste of the thinly sliced smoked salmon associated with an extended synagogue kiddush. It’s just the way he eats it — plain, sans bagel, with his greasy fingers — that conjures my gag reflex.

Often grossed out and baffled, I am simultaneously impressed that as each day goes by, my child battles his brain and uses creativity to overcome his boredom. I have to put aside my “it’s not what you eat but the way you’re eating it” mentality and just be grateful he was able to announce last night, “Mom, guess what? I finally weigh 43 pounds!”

Still, my ego remains bruised, because after years of refusing to touch my delicious homemade latkes — prepared with a century-old family recipe — my son returned home from school in November proclaiming, “I ate a latke with sugar and I liked it!” I was so excited I hosted a small latke party, but as it turns out, in my son’s humble (and let’s be real: obviously wrong) opinion, my potato pancakes don’t stand a candle, Hanukkah or otherwise, to Trader Joe’s.

So, I guess we’re at an impasse there.