I Watched 'The Lost Daughter' While Pregnant. That May Have Been a Mistake. – Kveller
Skip to Content Skip to Footer

I Watched ‘The Lost Daughter’ While Pregnant. That May Have Been a Mistake. 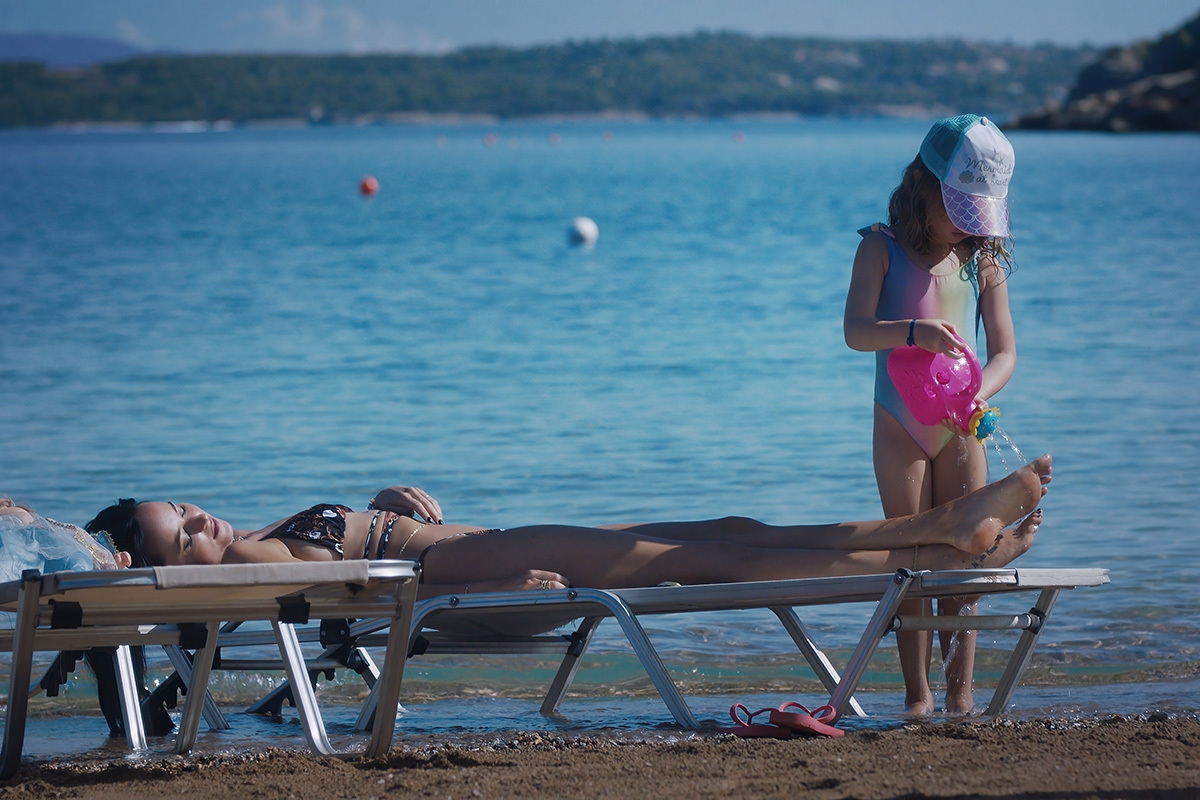 We were about 30 minutes into Maggie Gyllenhaal’s haunting directorial debut, “The Lost Daughter,” when my husband and I turned to each other and made the human equivalent of the grimace emoji. It was during a flashback scene from the main character, Leda’s, days of early motherhood: An exhausted Leda, played by Jessie Buckley, lies on the apartment floor while her 7-year-old daughter roughly drags a doll brush through her mom’s hair. It snags on Leda’s ear, forcing her to sit up while yelling, “Fuck! Ouch! Bianco, no!” Soon, we hear Bianca’s younger sister crying from the other room, sending Leda to put out that fire while Bianca grows upset at the loss of attention. It is an authentic and perfectly mundane depiction of life with little kids, the kind of moment we infer happened countless times throughout this stage of Leda’s life.

Any parent would watch that scene and feel a sense of understanding and recognition, would perhaps feel comforted by this portrait of parenthood that is not glossed over like it is in so many films that came before. But I am not a parent yet — not until this coming May. And as I kept watching “The Lost Daughter,” with all its painful, raw explorations of the pressures of motherhood, all I could think was: Fuck! Ouch! No!

Ever since becoming pregnant, I have made some questionable choices. Not the kind that would alarm my doctors — I passed my urine drug screening with flying colors! — but the kind that are maybe not so good for my delicate psyche as I waddle my way towards what I know will be a major upheaval to my life, both physically and emotionally.

I have long known I wanted to be a parent while simultaneously balancing my abject fear of it. I am afraid of what it will mean for my identity as a woman, a writer, a human being. I am afraid of how hard it will be, how sleepless the nights will become, how siloed my focus will be because this one little person needs my care and attention to survive. I am afraid that my mental health will suffer and that I’ll be too busy to take care of it. I don’t know if I’ll ever finish writing that novel. I don’t know if I’ll ever finish reading a novel. I already feel like I can’t keep up with laundry and dishes and household chores; I somehow suspect an infant roommate won’t help.

So, what have I been doing to soothe all of these fears? I’ve been reading books and watching movies that paint the realities of motherhood in such a painstaking, terrifying light that one might wonder if I’m attempting some form of amateur exposure therapy. One might also wonder if this is a genius move or very, very foolish. (It’s me, I’m one.)

The book I was reading when I found out I was pregnant was Jessamine Chan’s striking debut, “The School for Good Mothers,” the closest thing to a horror novel this scaredy-cat has ever read. The book spins out from “one very bad day” when frazzled single mother Frida, in a true lapse of judgment, leaves her baby home alone for several hours. She loses temporary custody of her kid while sent to a facility meant to mold “bad mothers” into better ones — through the use of high intensity surveillance and creepy robot children. Frida’s forced circumstances are horrifying, but scarier to me is Chan’s deft portrayal of Frida as a woman, a good person who loves her daughter, who feels the pressure and exhaustion of new parenthood and snaps. There I was, two positive pee sticks in my nightstand drawer (everybody else also held onto their pregnancy tests, unsure of what to do with those little pieces of plastic that are at once so momentous yet also literally covered in urine, for at least a few weeks before unceremoniously throwing them away, right?), wondering what my future breaking point might be.

As I neared the end of my first trimester, I found myself reading the wild and beautiful “I Love You But I’ve Chosen Darkness,” a new novel by Claire Vaye Watkins that follows a writer who leaves for a speaking engagement, breast pump in tow, only to find herself abandoning her infant daughter and husband as she returns to the land of her childhood to reconnect with the former self she fears she’s lost since becoming a mother. Watkins is an incredibly gifted writer who depicts postpartum depression with both gut-wrenching emotion and humor, and I was grateful to have read this unforgettable book. I also wondered if it was actually the worst possible decision I could have made at this particular juncture in my life.

Which brings me back to “The Lost Daughter,” which I watched with one hand pressed over my growing bump as if begging this child to stay in for a little longer before coming out and blowing up my life. There was a moment when we briefly considered turning it off, but I couldn’t bring my hand to the remote. In the movie’s present, Leda, played by Olivia Colman, is 48 years old and on a solo vacation in Greece, where an unusual bond with fellow beach-goer Nina (the dramatically-eyelinered Dakota Johnson) stirs up memories of her own child-rearing days and a drastic decision she made then that still clearly affects her. We see Nina with her own daughter, Elena, in moments that are sometimes blissful and sweet but more often not: Elena is crying; Elena is inconsolable; Elena wants her mother to get up, get up, get UP. Nina whispers to Leda, while holding a child that refuses to be put down, “She’s driving me crazy,” later confiding, “Sometimes I just can’t handle it.” In a scene towards the end of the movie, Nina, on the brink of tears, asks Leda, “Is this gonna pass?” She is talking about her current state of depression, but it feels like “it” could also stand in for the entire draining experience of raising children. Leda does not answer the question.

Gyllenhaal has spoken about how her own experiences of motherhood helped inform the script, telling Elle, “I’ve been a mother for 15 years, so I’m in the middle of it. I have some experience now. And I think even from the moment that they’re born, the spectrum of feelings is huge. There’s ecstasy and joy and this unfathomable connection on one side. And on the other side, there’s real terror and anxiety.”

Media about the realities of parenting and, more particularly, motherhood seem to be all the rage. Last year saw the success of books like “Nightbitch” by Rachel Yoder, in which a new mother and artist turns, quite literally, feral after giving birth. “With Teeth” by Kristen Arnett was dubbed “the perfect baby shower gift for someone you hate” and praised for its unflinching portrayal of a new mother failing to connect with her son.

In a recent piece for The New York Times Magazine, Lydia Kiesling (author of another incredible novel depicting young motherhood, “The Golden State,” which I had the good sense to read years before this baby was a twinkle in my whatever) writes about Hollywood’s newfound love for “monstrous mommies.” She cites Hagai Levi’s “Scenes From a Marriage” and the Netflix special “Maid” along with a review of “The Lost Daughter.”

On the latter, Kiesling writes, “As I watched, juggling my own domestic responsibilities with varying amounts of grace, I felt strangely honored by the way the film made space for Leda to make what is undeniably an ugly choice, allowed her to both enjoy her escape and suffer its consequences,” adding that she “felt seen by its portrayal of the condition of living simultaneously in joy and desperation, nostalgia and impatience.”

I don’t quite feel seen yet, but I do wonder if I’m seeing a vision of my future every time I tentatively (masochistically?) dip my toes into yet another fictional take on motherhood that makes me want to hide under the covers. Don’t get me wrong: I’m so grateful that these books and movies exist. We need more authentic depictions of motherhood, ones that include the darker feelings, the unspeakable urges, the experiences that so many women, for so long, didn’t feel like they could share for fear of being deemed a bad or ungrateful parent. And I love that more and more of these works are produced by women and coming from an undeniably real place.

The question remains, though: Do I need to be reading and watching them right now?

I wonder if part of me is drawn to these extreme portrayals as a perverse sort of comfort, knowing that, in lieu of these worst possible scenarios, I will most likely experience just the normal amount of parenting horror. (This morning my husband suggested watching “Rosemary’s Baby” next, because while we don’t know what kind of stresses we’ll face, we’re pretty sure it won’t be that.)

Whatever the reason, in the end, a pregnant lady’s gonna do what a pregnant lady’s gonna do, which, for me at least, is fret, worry and freak out about what’s going to happen when my life irrevocably changes this spring. I will count down the weeks until this baby is here with both excitement and dread, unsure of what kind of mother I’ll be, if I’ll be able to “handle it,” if I’ll like my baby, if my baby will like me, if I’ll ever learn how to strap myself into one of those Moby wraps. And I will spend an equal amount of time looking forward to the good moments, the scenes that, were my life a movie, would be bathed in sunlight and scored with soft piano music — the baby giggles, that newborn smell, the connection and love I’m told is like no other. I will remind myself that I am incredibly lucky to have a supportive partner who’s just as eager (and nervous) about this next step in our lives, who’s doing the dishes as I type this, who I can’t wait to watch become a parent, too.

When I do inevitably reach those overwhelming moments of frustration, depletion and exhaustion, I’ll already know that I am not alone, that this, too, is motherhood. I’ll know exactly where to turn to when I need to feel seen. And I’ll know that so many people before me have gotten through it, joyfully and deliriously. Some have even managed to write a whole book.