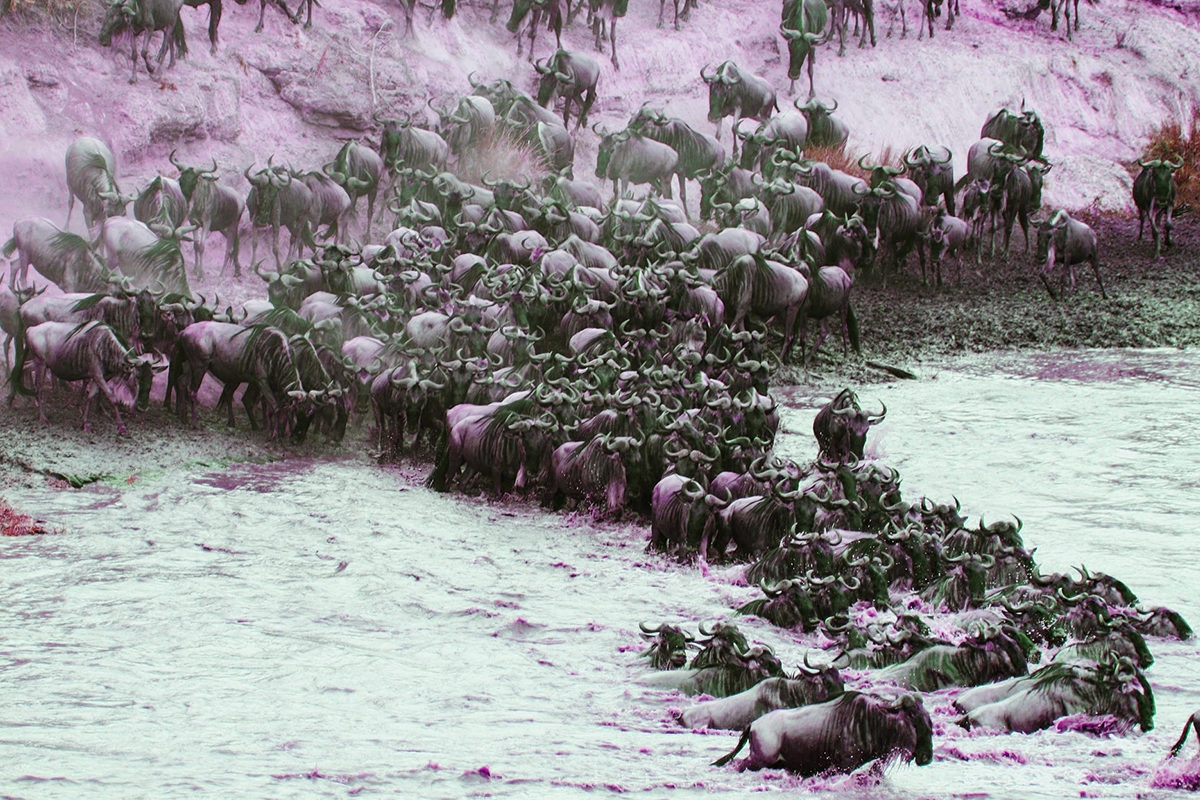 Unless you see it with your own eyes, the Great Wildebeest Migration is something no one can truly comprehend. Recently, when I was in Tanzania, I watched, awestruck, as a small herd of wildebeest arrived at the river’s edge. There, they walked, grazed, and occasionally peered over the edge of the riverbank, trying to deduce whether they’d chosen the right place to cross.

Many dangers lurked ahead — hungry crocodiles in the water, stalking lionesses in the nearby scrub, and scavenging vultures overhead. Over the course of several hours, more herds arrived and thousands of wildebeest converged on the riverbank. They pushed and brayed at the river’s edge, the pressure so tantamount that no threat of danger below could halt the ensuing chaos.

Suddenly, one wildebeest ran down the embankment and, within seconds, the rest of the mass followed, leaping over each other as they swam frantically for their lives. The sounds of splashing were muted by the overwhelming sound of mothers braying to their young, each with their own unique call so their young could identify where their respective mothers were in the fray.

Many wildebeest did not survive the crossing, succumbing to the crocodiles in the water or the ambushing lionesses on the embankment. Still more drowned amidst the chaos. Finally, about 10 minutes later, the majority of the herd made it across. A small number, however, had stopped at the opposite edge.

That’s when I saw the most heart-wrenching part of the whole ordeal: Babies and mothers that had safely made the crossing had returned to the river’s edge, loudly braying and searching for their missing mothers or babies. For several minutes they stood there, their braying intensifying. Finally, unable to wait any longer — it was dangerous to be separated from the rest — the lost babies and mothers rejoined the retreating herd.

I turned then to look at my own mother, who had invited me on this trip specifically to see the migration. I thought about all the times she was there for me, when she took care of me lovingly and instinctively, much like the wildebeest do. I missed the connection I had with her, merely as her child — as a child. I was now a mother myself, with two children ages 4 and 8.

Since our trip to Africa was 19 days, my mother gave me a year to work out the logistics. At home, I’m the primary caregiver, as my husband’s work schedule pulls him from home more often than not. My absence meant that I would have to prepare many things in advance, from preparing and freezing meals to arranging for additional help.

By the time I left for the trip at the end of August, I was completely burned out. Between working as a physical therapist and caring for the kids, I felt like I had disappeared — I was lost somewhere inside my body, reduced to a fraction of myself. Time to myself felt like an artifact of my past; time with my husband was scant; and my stress level often ran high, thanks to the constant juggling that all modern-day families endure.

My patience with my kids had become dangerously thin and I hated myself each time I snapped over something trivial. On occasion, I’d try techniques like deep breathing in order to clear the fog that taken up permanent residence in my brain. I found myself counting down the days to the trip, willing the days to pass instead of being present. I was excited to see East Africa, to spend time with my mother, but perhaps, more than anything, to reconnect with myself. I felt guilty about leaving my family for so long, but also felt like the time would save me — and my relationship with my family.

Once I arrived at the first camp, in Kenya, I found myself staring into the expanse of the African savannah, finally able to just breathe. No one asked me for anything. I felt present in my body, much like I remembered feeling before I had children. There was only sky meeting horizon, the occasional elephant, zebra or Cape buffalo dotting the landscape. It was liberating. To do nothing but observe these animals in the wild, to hear the soft swish of the grass as an elephant gracefully meandered by the vehicle was mesmerizing, and it also forced me to just be — there was nothing but the present moment.

I experienced fleeting moments of guilt for being away from my family, but they were dismissed by the truth that I would be back before I knew it. But then, a week into the trip, I witnessed the wildebeest crossing. That moment — watching the mothers and babies searching for the one being that was most significant in their lives — took my breath away, that very same breath I’d been enjoying since our trip began. I felt a rush of genetic fibers hurdle across the ocean directly to my children. Suddenly, I missed them, intensely. And I knew, no matter what my identity was before I had kids, mine was now intertwined tightly with theirs. The exact same instinctive pull that ripped those wildebeest away from the retreating herd to search for their lost young took ahold of me and shook me to my core.

What I found in Africa was that I was not lost. All the parts of my identity that I thought were buried still exist, only now they exist on a canvas colored by my role as a mother. All I needed was a break, a pause in my life to connect the dots and to enjoy all aspects of myself, not just my role as a mother.

I thought of the Torah teaching about emotional wealth I had recently heard, and how apt a Deuteronomy quote applied to me: “In you there shall not be a needy person.” When I applied it to my own life, I realized I had become a needy person. I was needy of time and space to rediscover myself.

When I arrived home, I felt renewed. My children ran to me and wouldn’t let go. I breathed them in, feeling as though I was exactly where I belonged. If I close my eyes, I now have the image of those endless savannahs in my mind — it’s the perfect place to retreat to when I feel like I need a break. I don’t need to go as far as Africa, but I’ve realized that prioritizing some moments as my own, taking deep breaths to restore myself, and allowing time for my inner spirit to wander will all help prevent the imbalance I felt before my trip. And for that, I thank the wildebeest.