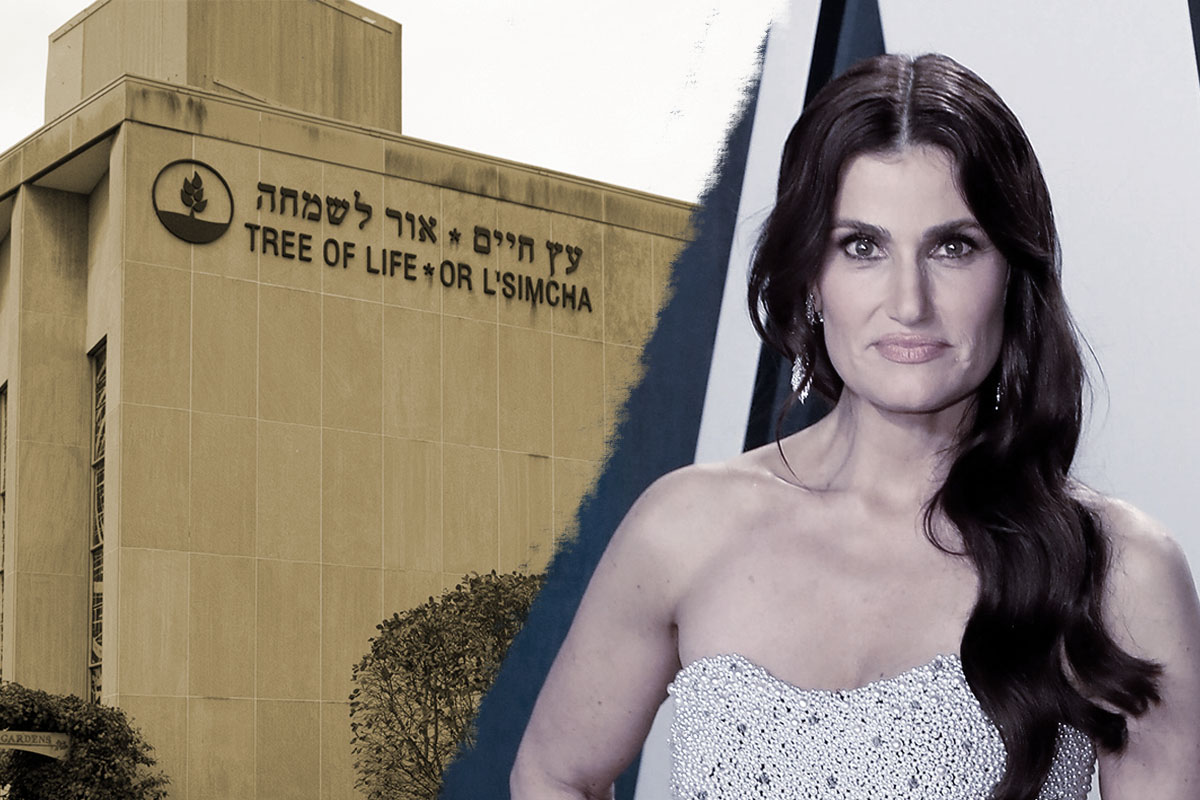 The new documentary “A Tree of Life,” about the deadliest antisemitic mass shooting to have taken place on American soil, premiered on HBO last night, and it can be a bit discombobulating to watch.

Made in collaboration with the survivors and the families of the victims, it takes its viewers into the horrific details of that day on October 27, 2018 at the Pittsburgh synagogue, painting a complex picture of Jewish life in America.

Pittsburgh natives Michael Keaton, Billy Porter and Jewish businessman Mark Cuban all signed on as producers of the documentary, which premiered on the eve of the fourth anniversary of the shooting. While there are so many heart-wrenching moments in the film itself, they all coalesce at the end with a new song from Jewish actress and Broadway star Idina Menzel, called simply “A Tree of Life.”

The song focuses on resilience and coexistence, with the chorus reminding us that, “No matter your prayer / there’s life for us to share.”

The name of the song, and the synagogue, refers to the Hebrew term “etz chayim,” first found in Genesis in the story of the garden of Eden — where there was both a tree of life, and a tree of knowledge. The term is commonly used to refer to the Torah, and a line from Proverbs — “etz chaim hee l’machazikim bah,” which means “she is a tree of life to those who grasp her” — is often sung in Ashkenazi congregations when the Torah gets returned to the ark after a reading.

“I’ll hold you tight beneath the tree of life,” Menzel sings.

The singer, actor and mom also added specific Jewish details to the song. “Place a stone beside their names, no soul forgotten,” she sings about the victims, referring to the Jewish custom of putting stones on graves.

The song also incorporates both the sound of the shofar and the melody of “Hatikvah,” Israel’s national anthem, which Menzel hums.

The video for the song highlights some of the most moving moments of the documentary.

It opens, like the movie, with shooting survivor Audrey Glickman playing the shofar on a rooftop close to the synagogue building where she survived the shooting. That shofar sound made it into a composition inspired by the shooting called “Healing Tones.”

We see the beautiful stained glass windows of the synagogue, the shrines to the murdered Jews that were made after the shooting, and white wooden Stars of David laden with rocks, candles, posters and flowers laid to honor the victims. There’s a shot of David Rosenthal’s family putting rocks on his grave. We see the Muslim community members that banded to help offset the burial costs, the protests against hate and white nationalism that took place in the town following the attack, and survivors hugging and leaning on each other.

The video ends by sharing the name of each victim along with their pictures.

There’s Joyce Fienberg, who had previously encouraged her son and daughter-in-law to move out of France and back to Pittsburgh because she was worried about the antisemitism there. In one particularly haunting scene, her daughter-in-law recalls how Joyce’s grandson, Adam, who was 9 at the time, asked, “Do you think someone can come and kill us?” His mother replied, “Yes.”

There’s Rose Mallinger, who was shot next to her daughter, Andrea Wedner, at the synagogue.

“I just told my mother I loved her and I had to go; I had to live,” Wedner says in the documentary, describing the moment when she had to leave her mother behind. “I knew she wasn’t going to survive.” The documentary shows a garden full of painted rocks dedicated to Mallinger.

There’s Jerry Rabinowitz, the rabbi who raced to help congregants and was shot while it happened. “Jerry and I looked at each other. Jerry’s a doctor and I’m a nurse,” said Dan Leger, who was shot by the gunman but survived. “And so we moved in the direction of the gunfire.”

There are brothers Cecil Rosenthal and David Rosenthal, who were an indispensable part of the synagogue community, beloved by all, who are shown in the video carrying a Torah scroll in the synagogue sanctuary.

There are Bernice and Sylvan Simon, David Stein, Melvin Wax and Irving Younger — all taken from us so brutally and too soon.

This isn’t Idina Menzel’s first time connecting her professional life and her music with her Jewish heritage. Three years ago, she came out with a rendition of “Ochos Kandelikas,“a Ladino Hanukkah song. She starred in perhaps the most iconic bat mitzvah dress movie scene of all time. And this April, she joined a group of Jewish celebrities to discuss American Jewish life in “Recipe For Change: Standing Up to Antisemitism.”

It was Trish Adlesic, the director of “A Tree of Life,” who approached Menzel about contributing the song.

Menzel told Billboard that when she watched the documentary, “the bravery of the attack’s survivors and family members in telling such a difficult and personal story moved me beyond words.”

She immediately recruited songwriting collaborator Kate Diaz, and the two asked Adlesic to send them some words of inspiration. “She sent: honor, tribute, unity,” Menzel recalled.

She said she wanted the song “not only to support and honor these courageous souls, but to make sure the film reaches across the globe to inspire action on antisemitism and hate in all forms.”

“I am Jewish and the film touched me in a very personal way,” Menzel added, adding that ultimately she wrote the song because the film’s story is “a human one.”

“The film starts out telling an American-Jewish story, then a Pittsburgh story, and now in its ultimate form the film is a universal story told through the voices of the family members of those so wrongfully taken and those that survived on October 27th, 2018,” Menzel explained.

May the victims’ memories be a blessing. And thank you, Idina, for creating such a touching song to honor them.