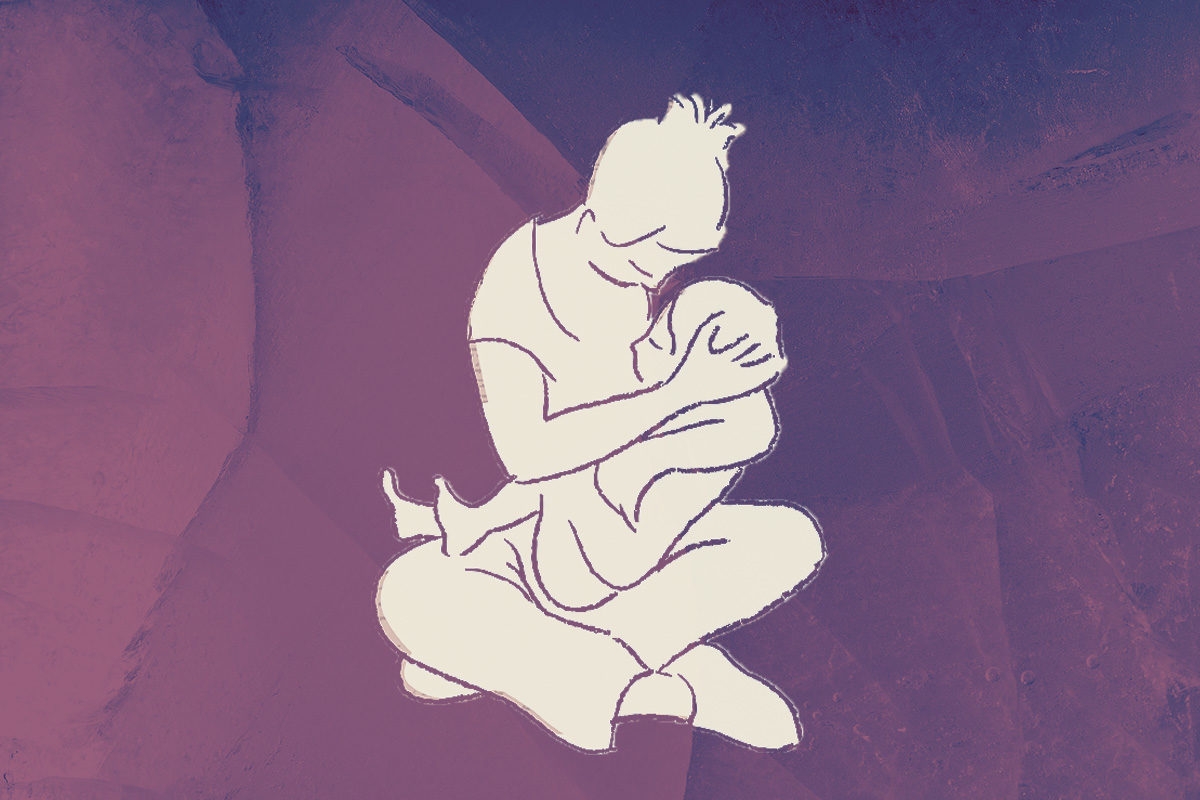 After three years, nursing sessions with my daughter have become a series of sweet hellos and quick goodbyes. I bring her into the bathroom to get her changed for gymnastics and, after she’s dressed in her blue and red leotard — which she announces is her Wonder Woman costume — she leans over to nurse for a minute. It is her quick goodbye.

After the class, when we change her back into the green pajamas she insisted on wearing out of the house, she grabs at me while saying with some urgency, “I want some boos!” Her hello — the demand for “boos” — reminds me she’s not as independent as she just appeared as I watched her brave antics in her gymnastics class.

My daughter and I didn’t start out with an idyllic nursing relationship. She was born six weeks early, weighing just 4 pounds, 6 ounces. She spent 10 days in the NICU. I could only nurse her a two or three times a day because we live two hours away from the hospital, in a small rural town. I pumped after each session, and then I’d go home to pump more milk for her. Our nursing sessions were mostly for comfort — she was too small to nurse efficiently. To make sure she conserved as much energy possible — in those early days, she spent most of her time keeping warm in the incubator — sessions were limited to 30 minutes at a time.

With her in the NICU working on gaining weight, I looked at pictures and videos of her while I pumped my nourishment, which sustained her through bottles. I was encouraged by the NICU nurses and doctors to nurse because, despite her inefficiency, she was probably getting a little milk. And skin-to-skin contact probably helped her grow, too.

Those stressful 10 days were also a time of hellos and goodbyes. During our four-hour roundtrip to the hospital, I pumped in the passenger seat using a manual pump. I held the bags containing the pumped breastmilk as if they were filled with liquid gold. Not only did I long to be with my daughter, my breasts apparently did, too. When I would get to her isolate, I’d immediately settle in comfortably in the wooden rocking chair and wait until she was put in my arms by the nurse. I would relax as she looked up at me, her tiny leg resting on my chest. Her suckles said hello. Our goodbyes were just as sweet, but I wanted to cry about having to leave her as I buttoned up my shirt.

You might think I’d be relieved when she was discharged, but I was scared to take her home. Everything in the NICU was so controlled and safe — the nurses told me how much I needed to pump, and they weighed my daughter to ensure we were on the right track. And so, at home, I topped off each nursing session with a bottle of pumped milk. It seemed like I was on an endless treadmill, nursing every two hours and then pumping for the next session. She began to want the bottle more and more — and my breasts less and less — and I felt deeply rejected. I hired a lactation consultant and, per her advice, I’d offer constantly. I would go topless in order to try to eliminate her bottle preference.

We had to add formula, which we soon replaced with donor milk, in order to help her gain weight. The ease of flow, the little effort, of bottle feeding was hard for my breasts to compete with — each session in these early months might have been a final goodbye.

When my daughter was 10 months old, we could finally stop supplementing with donor milk. I finally felt secure in our nursing relationship because my breasts could keep up with her needs. I didn’t have to offer on a constant basis anymore, she would reach for me on her own accord.

As I think back at how I grew comfortable in my nursing skin, I remember the hours nursing in bed, watching Real Housewives marathons while she “cluster-fed.” I remember dropping crumbs on her head as I ate and nursed simultaneously, and going into silent, darkened rooms to keep her focused during the day so we didn’t spend all night nursing. Then came the quick sips during a busy day — like drive-thru nursing — and now, now at 3 and a half, how she takes a break to tell me a funny story.

Often, when I am writing, I am nursing. She will swat at my arm and try to get into the exact position she wants so she can comfortably watch YouTube videos of kids opening toys on her Kindle. “Move! Give me the boos!” This is a moment of a long hello — I’m lulled into a peaceful calm as the oxytocin hits my brain, and feel proud how far we’ve come.

My husband asks me how long we can avoid the final goodbye. He doesn’t discourage me from nursing, he’s been supportive during this whole journey. He’s just curious, like when he asks when she’ll finally be potty trained. My answer to when these milestones will happen is, “When she is ready.”

I never even thought about nursing my daughter before she was born, and certainly not for this long. But after such a rough start, it’s hard to imagine ending such an easy nursing relationship now. I’m letting her take the lead. I’m fine with her self-weaning. But when will she be done? I don’t know.

Worldwide, the average age of weaning is between 2 and 4. Here in the U.S., only 20 percent of mothers even continue to nurse past 6 months old. So for us, at 3.5 years, our experience isn’t normalized — we are an anomaly breastfeeding so long.

These days, we don’t openly nurse in public. I don’t talk about our extended breastfeeding with many people. Everyone I have talked to about it has been positive, but I know that not everyone is comfortable with the idea. It’s just a gut feeling that it’s easier to not bring it up in casual conversation.

I don’t offer “boos” very often; mainly when she’s having a meltdown or needs some comfort. She doesn’t rely on me to quench her thirst, she drinks water for that. My milk is no longer a major source of nourishment, so I don’t feel the urgency to offer. She’s the one who sets the agenda — it’s her hellos and goodbyes I take part in.

Our relationship has ebbed and flowed with the pace of her development, and what that means for the future, I don’t know. I just know the art of extended breastfeeding is going with the flow.

Header image via Jose A. Bernat Bacete/Moment/Getty Images Plus