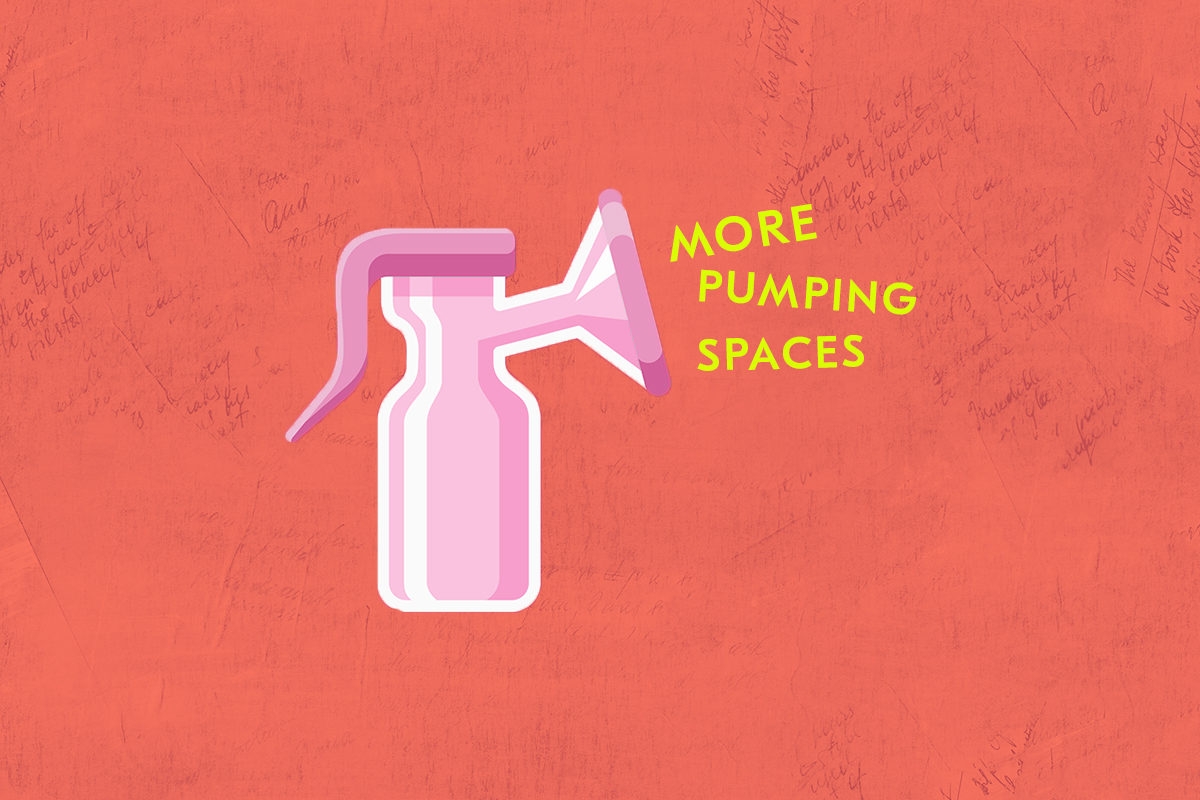 I’d like tell you about the time I pumped in an Anthropologie dressing room. Or when I tried to pump at an Equinox gym, or the Nomo Hotel, or the Whole Foods handicap bathroom, but the outlets were broken, the sink wasn’t working, or there wasn’t actually a handicap bathroom to use.

I should also tell you about pumping in an apartment building’s old compactor room, which featured a rodent bait station and a busted, old air conditioner. It was dirty and disgusting, but it actually had a sink, a working electrical outlet, desk, and, best of all, a lock on the door.

I work as a building manager at a small real estate company in New York City, which means I usually spend my mornings running around Manhattan, going to appointments at various residential buildings. I don’t have a private office in any of those properties. As a working mom of a 10-month old, what this means in practical terms is that every day I need to manipulate my schedule in order to squeeze in a pumping session between appointments with contractors who are never on time.

Most of my days are spent in old boiler rooms and on roofs. When I finally get 15 minutes to pump, it’s been a rude awakening to realize I literally have no place to go. There isn’t a single public building in my neighborhood with a place to pump.

But I nursed my baby all over the city! some of you may be thinking — and, hey, that’s great. But for those who are unfamiliar with the nuance: pumping requires different things than nursing. Pumping is not whipping out a boob and cooing blissfully at your baby under a cover. Pumping means attaching yourself to a sometimes industry-grade suction machine with a motor, many parts that require sterile handling, a plug (if you don’t have your battery pack), a sink, and at least a small degree of privacy if you’re not actually a dairy cow.

And so, many days, I run over to Buy Buy Baby in Chelsea — the last remaining big box store in Manhattan with a lactation room. I am almost always scrambling to make this happen by noon so I can make enough milk to pump a second time in the afternoon, and to time it just right in order to feed my daughter at home before I put her to bed.

I’ve been in my job for 15 years and I was trying to have a baby for six years. It was a long, complicated and painful journey, but after years of jumping through all the hoops and being extraordinarily patient, we finally welcomed a gorgeously fat, smiley baby girl last summer. My husband and I were in heaven.

Then, after just two months of maternity leave, I went back to work. (That’s considered a “normal” amount of time here in the U.S., but generally insane by human standards anywhere else in the world.) That’s when I got a harsh education in the realities of working motherhood: That despite a mom’s best, backbreaking efforts to “lean in,” the support system for doing so in the U.S. is lacking in the most basic and essential ways.

Just today, after a morning of appointments and a hurried pumping session at Buy Buy Baby, I returned to our company’s midtown office around 1 p.m. It seems I only have an hour to work before I begin my daily negotiation to see which executive is willing to let me use his or her private office. We’re a family company, so today I used my father’s office. But first, I have to lower the shades, move a large shredder to get the door to close, and wait for my brother-in-law to leave. The office manager and my father remain in the room with me because it’s inconvenient for them to move. Somehow, I agreed to this arrangement, and have rationalized it as better than my other options. Somehow, they also think this is OK.

Since I’ve been back in the workforce, I’ve been raging about this state of affairs. I started looking for resources, and I reached out to mom-friends to find camaraderie. I did find support through mom resources such as Moms Pump Here and its founder, Priya — together we are working to draft legislation to incentivize businesses to provide public spaces for pumping. In addition, I also found Mamava, a company that actually sells pumping pod rooms, which some airports have begun to explore. And that’s about it.

What’s more, I realized I wasn’t alone in my struggle. My friend, who is also a new mom, is a speech therapist who works for a state agency. She’s required to travel from school to school to treat kids, and she’s in the exact same boat — we’ve been robbed of the choice to feed our babies breast milk. Yes, I know that on the spectrum of new mothers in the world, we have it great in many ways — we have clean water and electricity and access to healthcare. But precisely because we have all of these things, shouldn’t we be able to do better?

I had assumed separation anxiety would be the toughest part about going back to work as a mom. But I was wrong: The hardest part has been making the time — just 20 minutes, just two times a day — to stop and pump… and then, finding a place to pump. Often I had nowhere to go where someone wouldn’t bother me — a store manager, a restaurant employee, or another person in line for the bathroom or dressing room. I get it — every inch of Manhattan real estate is valuable. Who has the extra money to set aside a room that will only be used by one person, once in a while? It doesn’t add up. And yet, I can’t help but wonder: If men lactated, wouldn’t this shit have been figured out in conjunction with the advent of the breast pump?!

New moms need help. We need support. Awareness of the issue is a great start but it’s not enough to make change. We need laws, we need partners. We need forward-thinking companies to just raise their hands and say they’ll build a room or buy a Mamava pod to throw in the corner of their store. CVS, you’ve demonstrated your forward thinking in other ways — I love your no-airbrushed beauty shit and your commitment to stop selling cigarettes. Are moms also important customers to you? Make an ally. Make an army of them!

Lactation rooms are the answer to this problem. We need public spaces available for pumping, and not just to breastfeed or change a baby’s diaper.

There is so much that is possible. See all the new high-rises and cranes towering over Manhattan? We need to require lactation rooms in new developments, and require new stores and restaurants over a certain square footage to set aside a space for pumping. We need to partner with medical facilities or health-focused companies who are willing to create a space, and make a change.

As for my pumping journey, I’m giving up. My daughter is 10 months old, and she’ll be just fine with formula. But I’m not ready to hand off the baton without affecting any change for my successors, because the next wave of new moms coming up behind me are also going to get swept up in this unwinnable guilt cyclone. If you’d like to join me in advocating for real change for lactation moms, reach out to Info@momspumphere.com to get involved!