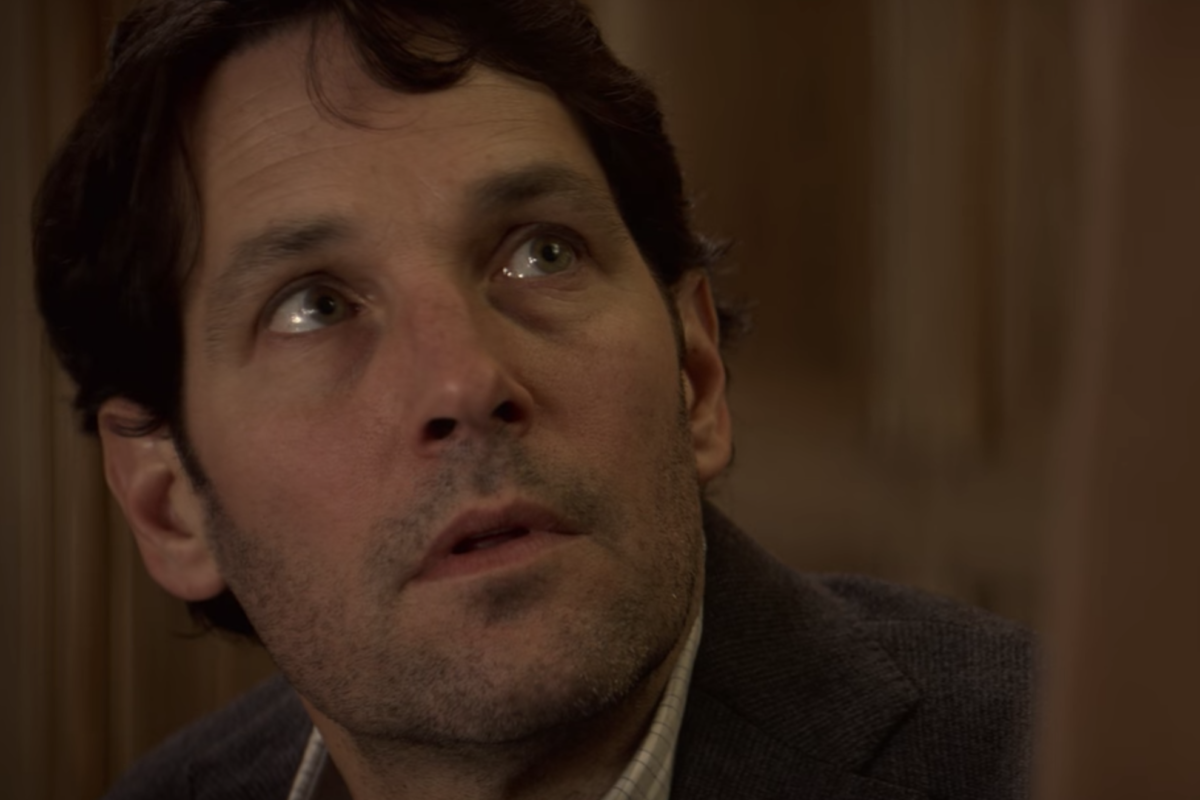 A new Netflix show, Living With Yourself, offers its viewers not one, but two Paul Rudds — which seems like an irresistible TV deal, amirite? After all, everyone loves the seemingly ageless Jewish dad (and former bat mitzvah DJ!) who is known for starring in fun and easy to watch superhero movies and comedies.

But this surprising show, created by Tim Greenberg, a Jewish producer who worked on The Daily Show, is much more challenging to watch than anything Rudd has starred in before.

In fact, a week after watching it, I’m still not sure what to make of the show. And I keep thinking about one scene in particular — one that involves a Holocaust survivor, pork products, and a brief but disturbing story that seems completely out of place.

But first, let’s clarify the whole two Paul Rudds thing. In Living With Yourself, Rudd (who IRL is a 50-year-old father of two) plays Miles Elliot, a copywriter living in suburban New York whose life, both professional and romantic, has lost all its spark.

His wife, Kate (winningly played by Irish actress Aisling Bea) wants to have kids and is pressuring him to deposit some sperm for an IVF treatment. Miles, however… doesn’t seem to want to do much of anything, really. Seeing Miles sleepwalk through his life, one wonders how he still has his wife or his job, and Miles himself seems to realize that something’s gotta change. That’s when he finds out about a special spa that will rejuvenate his life completely.

After shelling out $50,000 (he is, after all, just that desperate!) for the mysterious treatment, he finds himself buried alive in a dark forest. Turns out, he hasn’t been renewed: He’s been cloned. What’s more, his clone — a fresher, shinier, more vivacious version of himself — has taken over his life.

What happens next is full of twists and turns that veer from terrifying (I mean, the O.G Miles claws himself out of the ground!) to hilarious (Rudd’s deadpan humor for the win!) to heartwarming (Miles and Kate have a pretty adorable dance scene) to downright befuddling (more on that later). The series touches on some very heavy themes — what is the nature of self, anyway? — yet is distilled into eight very short episodes, each less that 30 minutes. It’s likely that this rather constrained format is what creates the uneven nature of the show; unfortunately, more often than not, Living With Yourself stops short of the meaningful introspection its double entendre of a title offers.

Then there are a few scenes that are particularly hard to digest. None is more baffling as a scene in which Rudd is faced with a Holocaust survivor, played by Jerry Adler, who reprises a dark mafioso vibe reminiscent of his Sopranos role as Jewish loan shark Herman “Hesh” Rabkin.

Adler plays Hillston, the owner of an eponymous telecom company, which Miles’ agency is hoping to win over as a client. After the “real” Miles hesitantly but successfully pitches him on a concept that was created by the fresh-faced and un-jaded cloned Miles, Hillston, a Hungarian Holocaust survivor, asks to be left in the room alone with Miles.

Before he gets to the point, he tries to feed Miles some quality Hungarian treif, in the form of the delicious pork sausage from Hungary.

“Here, try it, you’re gonna love it,” he says, just like a zayde would, and he does seem like an adorable and harmless Jewish old man. Until what happens next.

Hillston tells Miles that his pitch, while excellent, seems like it wasn’t his own. He goes on to tell his story, which he sells Miles as “a funny story, about when I was a boy in the concentration camps.” Spoiler alert: It’s not a funny story. At all.

“You see I was in Birkenau,” Hillston begins, referring to the Auschwitz II-Birkenau, the concentration and extermination camp. He tells Miles of how hungry he was, and how all the kids would eat whatever they could find.

“One day the guard called a lineup for all the children in the camp because a Jewish child had stolen a ration,” Hillston tells Miles, deadpan. “Which meant that another Jewish child would not be eating that night, which is very sad. But, you see, I knew who did it, so I took my little hand and pointed at this 8-year-old zsivany, this naughty boy. He was always getting in trouble.”

“Anyway, they marched him out and they blew out his brains right there in front of me,” Hillston tells a stunned Miles.

It’s a harrowing anecdote, and not an unfamiliar one. Anyone who has read a Primo Levi book knows Jews did some dark things to survive the Holocaust. But the glibness of this story, the darkness of it, it feels completely out of place. It is too morbid for the show.

Hillston supposedly tells the anecdote to teach Miles a lesson: “I don’t mind a cheater,” he tells him. “But if you’re going to cheat, do it right.”

And then, he reverts back to adorable (secular) zayde, as if nothing has happened. Before leaving the room, he tells Miles: “Have some pork, you’re very skinny!”

The scene is very, very shocking. It seems to unhinge original Miles, too — which I guess does give it some purpose. But it’s hard to understand why the showrunners chose to tell this story, it’s hard to make sense of what we as viewers were supposed to take from it, aside from a lingering icky feeling.

Still, Living With Yourself does shine in moments, especially when Rudd plays scenes opposite himself as both the original and the cloned Miles — which Rudd manages to differentiate wonderfully, without making either Miles a caricature. The jealously towards a better (possibly younger?) version of yourself that doesn’t know how good they have it is, well, very relatable, as is the longing of cloned Miles for the experience and the security the original version has.

When the show focuses on Kate — who is also struggling with the loss of luster in her life and marriage — the series really sings. Her complicated relationship with the two Miles (Mileses? Milesim?) is perhaps the most interesting part of the show. It makes sense that when someone truly loves their spouse but the relationship hits a rut, an idealized and improved version of said spouse can be very attractive (and, um, not to mention, hot!).

Despite the very jarring treif-peddling Holocaust survivor scene, I like to think that Living With Yourself is worth watching for those occasional brilliant moments. And, yes, the more Paul Rudd, the merrier — and if the early rumors of a second season are true, we’ll be tuning in.