In 'Blewish,' Biracial Jewish Kids Finally Get a Story That Speaks to Them – Kveller
Skip to Content Skip to Footer

In ‘Blewish,’ Biracial Jewish Kids Finally Get a Story That Speaks to Them 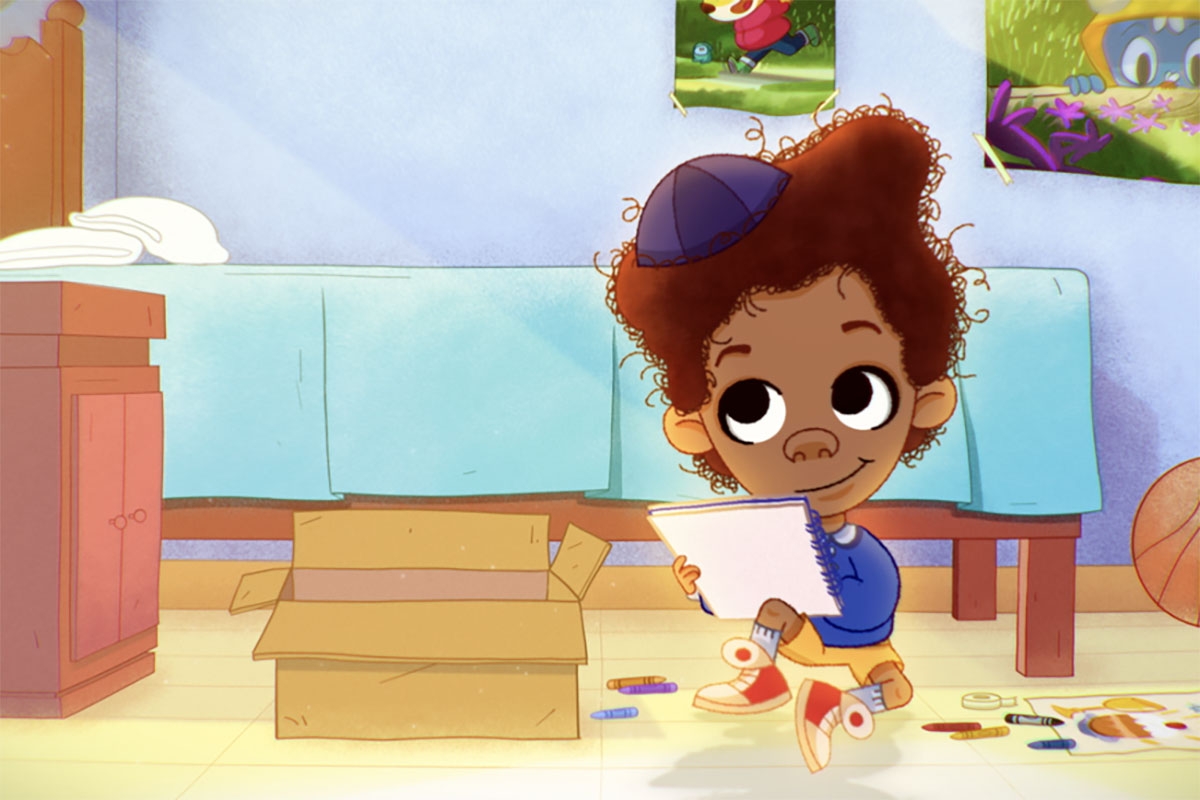 In the program of the Chicago International Children’s Film Festival, which opened last week, you will find a movie that every Jewish family needs to watch: a four-minute short named “Blewish.”

The film may be short, but it packs an emotional punch (I may or may not have shed a tear while watching it). It’s based on the life of Ezra Edmond, who wrote and directed the movie, and who, like the title character of the movie, is “Blewish” — as in Black and Jewish.

The movie tells the story of a young boy navigating his Jewish identity and what it means to find Jewish belonging. With vibrant, colorful animation, it spins a tale that is both adorable, emotionally resonant and full of Jewish specificity — a scene where matzah is crunched into a bowl to make matzah balls is viscerally familiar for many of us who grew up Ashkenazi Jewish.

Edmond, who directed and produced the film, says that it was a chance encounter that inspired “Blewish.”

“One day, a few years ago, I was in a book store and I saw an Ashkenazi mom with two biracial ‘Blewish’ kids, lamenting about how there wasn’t much representation available for them,” he told Kveller over e-mail. “As I overheard that conversation, I remembered how I felt as a kid and wished I had something to hand them at that moment — a book, even a drawing — but I didn’t have anything to share.”

“When I went home,” Edmond continued, “the moment stuck with me and I started writing. I wanted to tell a story about friendship, accepting who you are and being proud of your identity; something that would’ve meant something to me, and made me feel included, back when I was that age.” 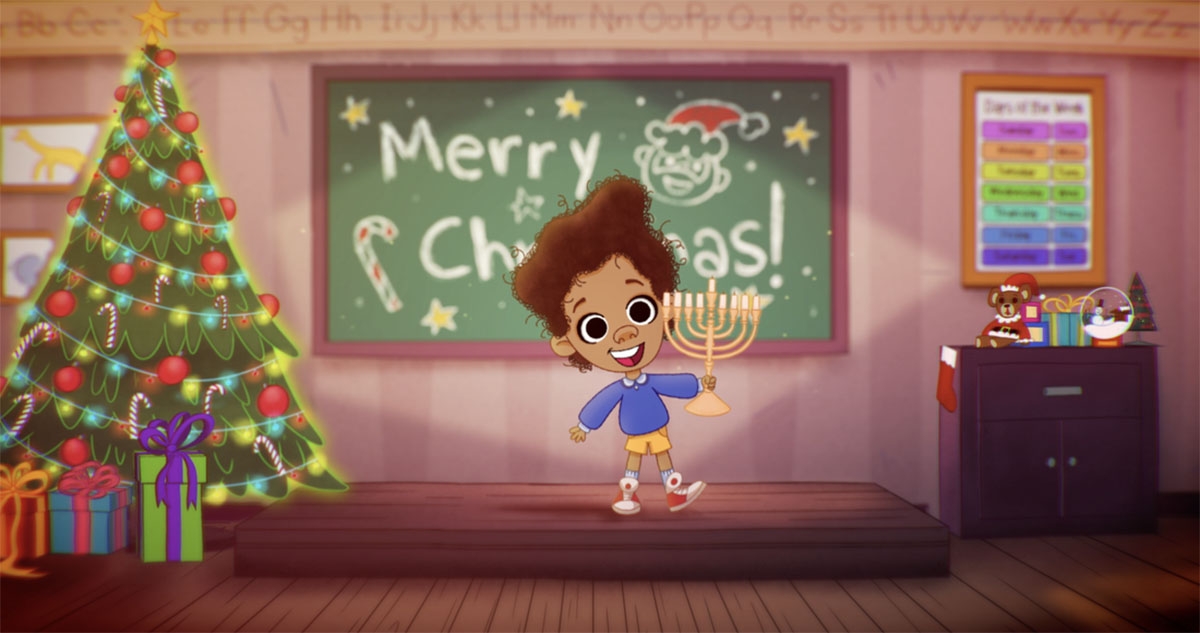 Despite the fact that it was challenging, Edmond says that making the movie dialogue-free was one of the most important choices he made, and that it helped make the movie what it is: “I knew that hearing a voice can activate internal bias and affect how you related to a character, and I wanted this story to be able to play well and be relatable to anyone, regardless of what language they spoke or where they were in the world.”

Growing up, Edmond explains, “I often found myself feeling like an outlier with many people not understanding and asking ‘How I could be Jewish if I was Black?’ and vice versa. In Ashkenazi Jewish spaces, I often was very aware that I was the only Black person in the building, and then in Black community spaces, I would often feel an assumption (maybe self-imposed) that I was the only Jewish person.”

Despite those feelings, Edmond spent a lot of time in Jewish spaces, going to Hebrew school, becoming a member of the Jewish youth group USY, and doing musical theater at a local temple, where, he says, “there were plenty of kids along the way who would ask me questions like ‘are you really Jewish’ or ‘which one of your parents is actually Jewish, your mom or your dad?’ and other kids who would make insensitive jokes or statements.” But, Edmond continues, “I also made lots of really wonderful friends and we had amazing experiences and made many awesome memories together.” 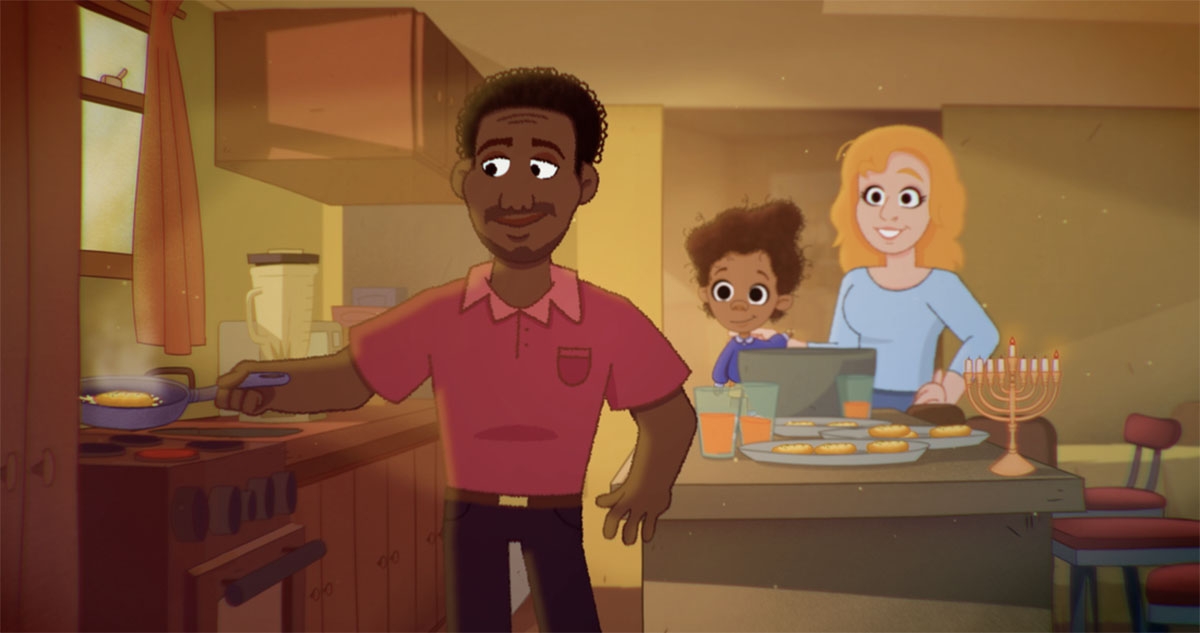 It’s clear from this film that Edmond loves being Jewish. He loves the flavors (his grandmother’s honey cake and his mom’s matzah balls soup are the best, he claims), Shabbat and holiday dinners with his big blended family, and the rituals and values. “I’ve always found Jewish values to be warm and welcoming,” he says.

That love is palpable throughout the film’s more painful moments (no spoilers!). It’s the kind of love that we all want to pass down to our Jewish children. This short, beautiful film is a love letter to being Jewish — and to what being Jewish can be, when we create a community that is welcoming to everyone.

“While this is a story about a biracial child figuring out where they fit in on the spectrum of embracing their Black and Jewish identity,” Edmond says, “I really want this story to relate to anyone who has ever felt out of place in any way. I want this story to show that you can always find a place where you belong and that it’s within your power to create that space for others as well.”

“I want this film to be a reminder that if you don’t feel representation exists for you, you can go out there and make it, and you will find an audience,” Edmond stresses. “Everybody is special, and all of our identities are valid. Everybody has a story to tell that others want to hear and will appreciate — they just might not realize it yet.”

You can watch “Blewish” now, through November 24, on the Chicago International Children’s Film Festival website.