My Kids Are Black and Jewish. To Them, These Identities Are Inseparable. – Kveller
Skip to Content Skip to Footer

My Kids Are Black and Jewish. To Them, These Identities Are Inseparable. 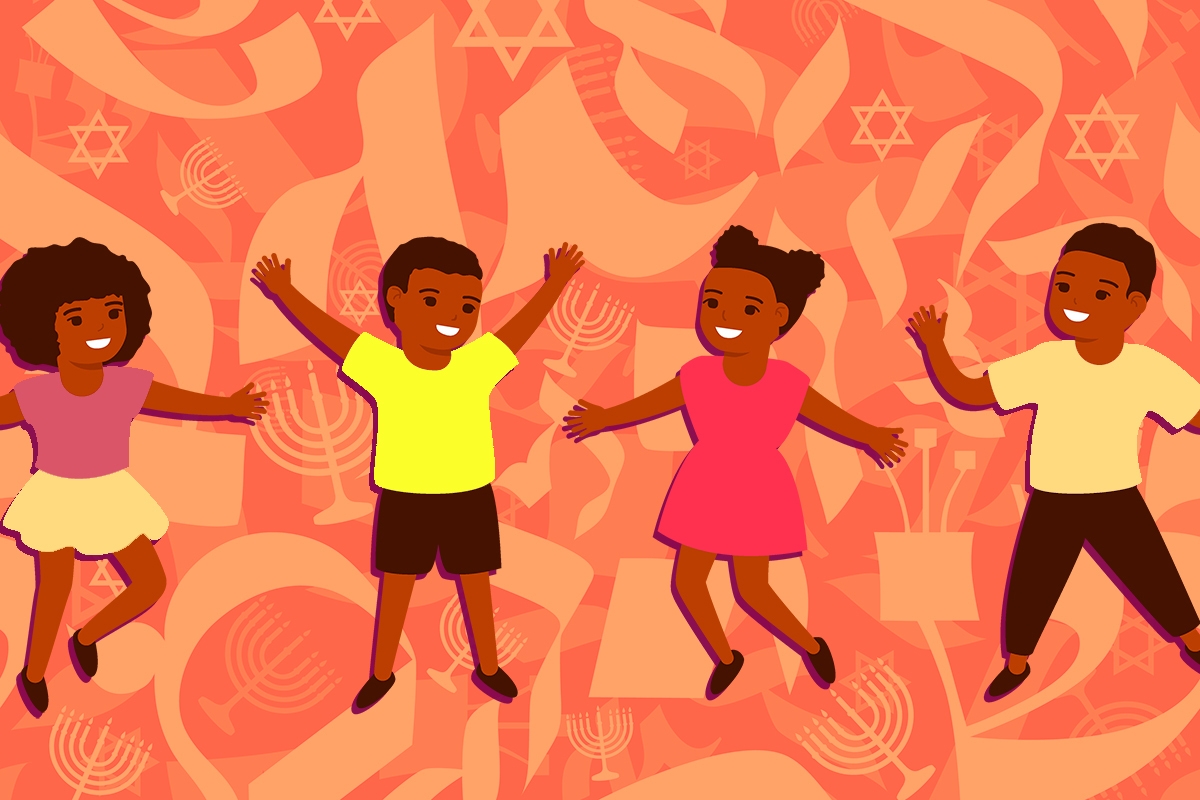 “Dada, what does that sign say?” We were at the park on a recent Tuesday morning, and my 5-year-old asked my husband that question. Her dark arm pointed to a Black Lives Matter poster in a nearby yard.

“That’s the one that celebrates Hanukkah, right?” she asked. My husband and I looked quizzically at each other, trying to make sense of her question, when her sweet voice added, “What’s the difference?”

At first, we laughed at the innocence of her question — but then we realized the sophistication of her remark. It wasn’t that she was muddling things in her mind; rather, the message she read into the sign was far more complicated than she initially let on. At her young age, to her, supporting Black lives and celebrating Hanukkah is part and parcel of the same thing; one does not happen without the other. She doesn’t discern her identity as being Black and Jewish. She was simply identifying herself — and, by extension, the sign — as she sees it: a Black Jew.

Yes, our young children, ages 2, 5, and 8, are Black and Jewish. My husband is Black, I am Jewish, and together we are raising our families’ first generation of Black Jews. Our extended families — with histories of persecution on both sides — have long been anticipating discussions with our kids about civil rights, racism, and antisemitism. We felt we were well prepared for any questions or hard conversations that may come our way.

However, what we didn’t expect to learn from our children was that they don’t separate their identities — and, similarly their values —  of being Black and being Jewish. To them, being a Black Jew isn’t a unique identity, as many outsiders see it. And while I perceive it as an integral part of their values, the reality is my children don’t see it any differently than other qualities and interests they have, like skateboarding and painting rocks.

True, my husband and I weren’t expecting to get into a deep discussion about cultural identity on an empty playground that morning, especially during the middle of a busy school and work day during the tenth month of a global pandemic. We simply thought the outing was a much-needed escape from our news feeds. Instead, we were schooled by our own children, who reminded us that a view of the world should be considered through the eyes of another, even when it’s a 5-year-old. After all, our personal journeys and unique experiences as individuals are what shapes our perspective of the world.

Our children pointedly understand what many adults have trouble seeing: their upbringing in a Jewish home is based on the shared values of their parents. “Did your husband convert?” people often ask. “He didn’t need to,” I reply. Ingrained in my children is a lesson many adults have yet to learn, which is that Jews and Blacks have a shared history of oppression as well as one of championing justice, civic engagement, coalition-making, and allyship.

Being Black Jews, our kids are benefitting from unique modeling from their grandparents. Their Black Baptist paternal grandparents are in the front row for every performance at Sunday school; they clap along as the children sing the classic Hebrew song “Hinei Ma Tov,” which fittingly translates to, “How good it is to sit together.” On the maternal side, their Jewish grandmother was a teacher at an all-Black school in Atlanta in the 1960s. She is currently putting her life’s work down on paper so her grandchildren will understand her community action as part of her legacy. Jews and Black people have long shared the belief that education, and teaching our histories, in particular, is an out from oppression.

At Sunday school, when the children learn about tzedakah — like they do every year — they learn the importance of helping others. Justice is the derivation of tzedakah. From a young age, Jews are taught that being nice is not enough — we must make right of injustices. We are taught that it is our Jewish responsibility and tradition to create tikkun olam, to do our part in repairing the world. Remarkably, young children constantly find opportunities to be civically conscious: on the playground, modeling inclusion, saying sorry when they hurt someone, and speaking up in defense of others. In the simplicity of their actions, adults can learn from children who are brave enough to find strength within their tender voices.

Each year, our family observes Martin Luther King Jr. Day not as a day off but as a “day on.” To celebrate, our temple in San Diego takes part in a day of service, and Martin Luther King Jr.’s renowned quote, “Injustice anywhere is a threat to justice everywhere,” forms the backbone of their Sunday school lesson. This lesson isn’t limited to a single day in January, however, but through a culmination of shared holidays, celebrated with both sets of grandparents to show it is not one side of the family versus the other. Coming together allows the children to see their culture honored.  They know it is not enough for the Black community to be their only advocates. Likewise, it is not enough for Jews to champion only Jewish causes. We are raising our Black Jewish children to know it is not enough to just speak up for themselves; my kids understand that it takes allies of communities coming together to help make change.

Throughout much of the pandemic, without a daily commute, in-person school, and events to attend, we’ve found enjoyment many evenings by cheering on Kamala Harris. Through our children’s eyes, we see them watch a Black woman who’s married to a Jewish man, and how their blended family embraces the totality of the cultures and religions they bring to the table. We watch them hear her say, calmly yet forcefully, “I’m speaking.” The relative quiet of the pandemic has allowed us to observe them more closely as they hear the voices of women who look like them, who speak up, and who know their voices should be used to amplify those who haven’t been heard.

This week, just prior to the violent riots at the Capitol Building, the eyes of the world were on the super-close senatorial election in Georgia. The country watched a young white Jewish man, Jon Ossoff, partner with an African American, Rev. Rafael Warnock, in their bid to flip the Senate to Democratic control. For weeks, Americans scrolled through their endless social media feeds, watching to see if this duo would make Black and Jewish history. Meanwhile, my children played with their Legos, understanding what America is watching is Black-Jewish history — no “and” necessary.