In His 90s, This Jewish WWII Vet Embarked On a New Career: Writing Children's Books – Kveller
Skip to Content Skip to Footer

In His 90s, This Jewish WWII Vet Embarked On a New Career: Writing Children’s Books 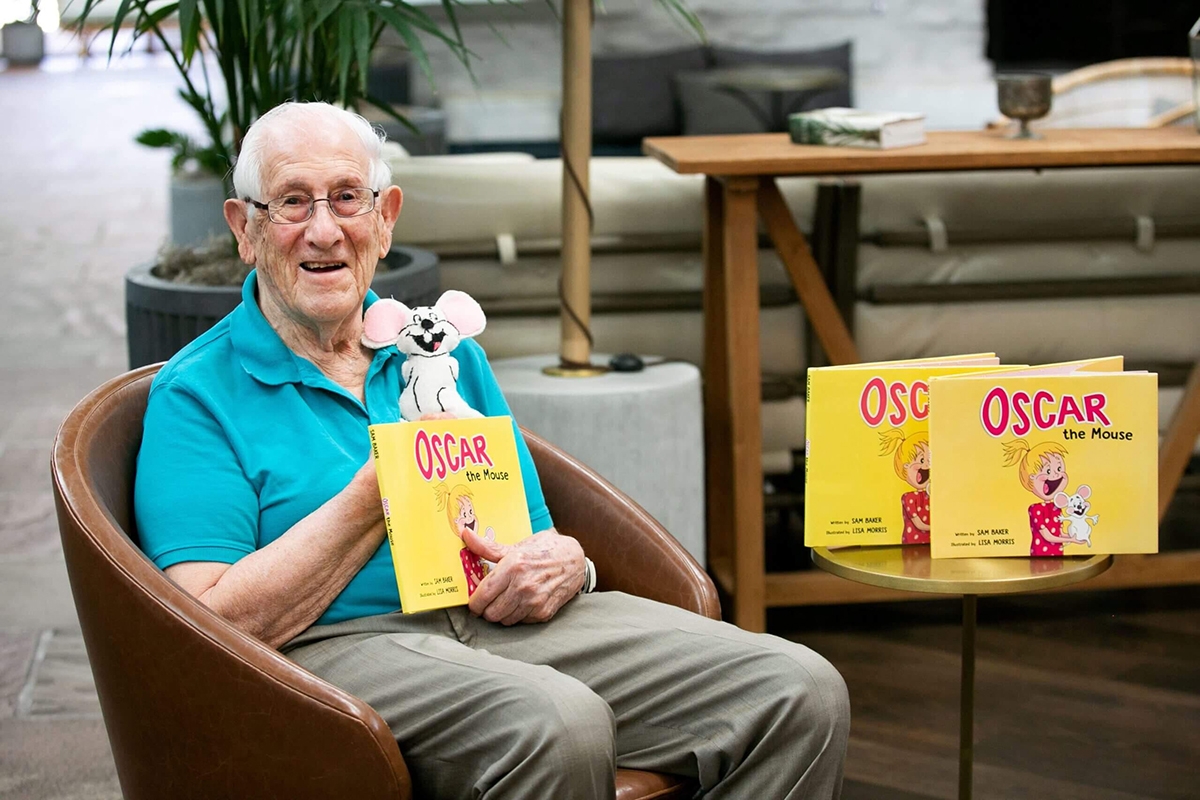 Sam Baker is just a year shy of his 100th birthday, but he is still young enough to follow new dreams. The 99-year-old Jewish World War II veteran is now working on his third kids’ book — a career that he started at the age of 95, when he published “The Silly Adventures of Petunia and Herman the Worm.”

“My daughter, Sally, along with my friend and author Linda Larson Schlitz, helped me to make my dream and goal of publishing books come true,” Baker, a former GPS salesman, told Kveller over e-mail.

Baker was recently featured in a moving ad for the design software Canva, in which he retells his life story to his grandchildren, using designs from the software and pictures from his life. Baker used the app to make materials to crowdfund his most recent book, “Oscar the Mouse,” released in September 2020 and inspired by a rat that Baker kept as a pet growing up in Clarksdale, Mississippi. Baker dedicated the book to his children, and to those working at the frontline of the COVID-19 pandemic.

“I’ve lived a lot of lives and learned a lot of lessons along the way,” Baker says in the ad, as he creates an album of pictures full of weddings, family vacations and dinners, of Baker and his two kids, Sally and Michael, as well as pictures of Baker in his marines uniform.

He tells his grandchildren to “be kind, because, at the end of the day, we’re all more similar than you think. We all experience ups and downs.” He then adds, “I always had the feeling that love can solve most of the world’s problem. Yes, she certainly did for me,” as a picture of his late wife, Janet, shows up on the screen. “She’d be so happy that I’m still using my creativity,” he kvells.

“Janet always supported me in all phases of my work and career. She also encouraged me to put my stories on paper, so that they would be family treasures,” Baker says.

Baker met his wife at a progressive party in Sacramento, California, when he was there for work.

“When I asked her for a lunch date, she said we should meet at a certain street intersection, and I stood there for an hour, no Janet. My phone call to her that night wasn’t without anger. Her reply matched my anger. We were a block apart. We solved that problem and started going steady after a couple of dates.”

Both of Baker’s parents were Jewish, and he and Janet raised their children Jewish, as well. “I like being around Jewish people,” he confesses, “and during my many travels have sought out Jewish temples to meet Jewish people there.”

“There are many avenues of Judaism one can follow. I prefer the joyful, loving routes that it teaches, and tried to impart that feeling in my books,” Baker says.

“Books were not the primary influence for my writing,” Baker explains, when asked for the inspiration behind his new career. “It was stories I told the children when they were young. This led me to write my own stories where I encourage children to use their imagination.”

“I loved being a parent, even though I was away on duty for months at a time,” Baker explains. “That feeling probably was instilled in me by the love and understanding my parents gave to me and my sisters. My father always said that his grandchildren were interested in his investment in his children.”

His next book will continue the tale of Oscar the mouse — in it, Oscar goes to the vet with a tummy ache, and the doctor diagnoses him with a very bad case of EBS — “eyes bigger than his stomach.”

Baker wants his work to encourage others to chase their dreams: “The first step is always the hardest to take. It’s like pushing a car that is stopped. Sure, it’s hard to get it moving, but once it’s moving, it takes a lot less energy to keep it going.”