In the Jewish Heart of Pittsburgh, Mister Rogers Was Actually Our Neighbor – Kveller
Skip to Content Skip to Footer

In the Jewish Heart of Pittsburgh, Mister Rogers Was Actually Our Neighbor 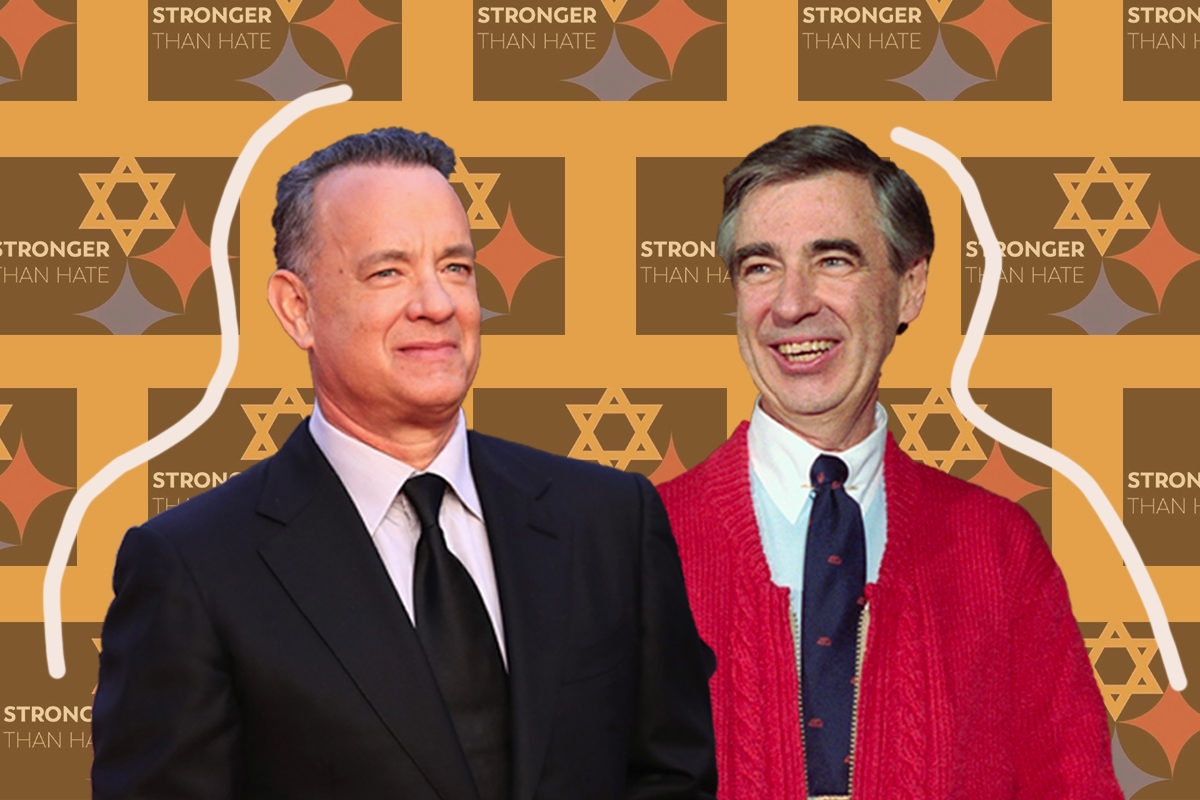 I’m sitting in a sold-out first weekend movie premiere of A Beautiful Day in the Neighborhood, delighted by the fact that this movie was filmed in my Pittsburgh neighborhood, Squirrel Hill. It’s an upscale, multicultural neighborhood — far more diverse today than it used to be — that is also the center of the city’s Jewish community.

Sadly, it is most famous for today for the deadly attack on the Tree of Life synagogue.

Squirrel Hill is also, quite literally, Mr. Rogers’ neighborhood. Rogers lived in Squirrel Hill, and for 33 years, he filmed Mister Rogers’ Neighborhood at the nearby WQED studios. While surely anyone who grew up watching the show feels a personal connection to Rogers, here in Pittsburgh, he isn’t just a global icon. He’s a local hero.

We’re at Squirrel Hill’s indie movie theater, the landmark Manor Theater, where the ticket-taker greeted us wearing a red cardigan, singing, “It’s a beautiful day in Manorland.” I’m filled with anticipation, imagining how Tom Hanks — whom I most fondly remember from one of my favorite childhood movies, Big —  might bring Rogers to life.

As the movie begins, Hanks comes down the stairs clad in Rogers’  iconic red cardigan. He sings the well-known opening music to Mister Rogers’ Neighborhood, “It’s a beautiful day in the neighborhood” — and the entire theater joins in a singalong. Hanks, as Rogers, is tying his sneakers, singing, and looking directly at me — just like Rogers used to do, many years ago, when I was a preschooler watching his show in my family’s New York City living room.

I’m trying not to get distracted by the obvious physical differences — Hanks’ glasses, his rounder face. I’m trying to measure up his smile and intonation against the memory of Rogers. And yet, I’m comforted and reassured that Hanks is able to give voice to a very public person who, through the magic of television, as well as his pure and honest delivery, had a special way of making me feel special and cared for, just as he did for millions of other children.

Seeing Hanks “do” Rogers is like meeting my long lost friend all over again. And not just for the two hours that I’m sitting in the theater.  Like so many children who grew up watching his show, Rogers is someone I’ve long felt deeply compassionate towards — and that feeling only strengthened after the Tree of Life attack.

In those early and very dark moments, when a gunman murdered 11 Jewish souls, my social media feed became flooded with Mister Rogers memes. “Look for the helpers,” they said, “You will always find people who are helping.” When Rogers first uttered those lines, he was referring to his own memories of feeling scared by terrible news as a boy, and how his mother would encourage him to look for those helpers. In Rogers’ words, “To this day, especially in times of disaster, I remember my mother’s words and I am always comforted by realizing that there are still so many helpers  — so many caring people in this world.”

But during those very dark and traumatic days after the attack, I kept listening, looking for those helpers. Where were they?

Turns out they were there; I just had to be patient. The following week, during a rally for peace and unity held in honor of the victims in the Tree of Life synagogue shooting, Tom Hanks would appear in the pouring rain, next to Joanne Rogers, Rogers’s widow. There, he’d say in earnest, “The people of Pittsburgh live in good neighborhoods that do not divide the city but define it.”

Hanks was just one of many helpers who’d stand in solidarity with us, as if he was an insider to our community, to our pain. At that moment, he wasn’t just an adored celebrity, he was someone who cared about my city —  our city, our community.

In the movie, Rogers takes a personal interest in Lloyd Vogel, a bitter and angered journalist (played by Matthew Rhys and based upon real-life journo Tom Junod) on assignment to interview Rogers for Esquire. Vogel struggles to feel compassion for his father, who had left Vogel’s mother while she lay dying. Vogel cannot forgive him for this. However, with the help of the children’s TV icon, he unwittingly begins to realize that he, too, needs a helper, when Rogers invites him to the set in Pittsburgh and performs with a puppet, Daniel the Striped Tiger, the iconic song, “What do you do with the mad that you feel?”

Following the attack, what did the citizens of Pittsburgh do with the mad that we felt? Well, our city and community came together in a most unprecedented way: there were crocheted hearts strung to tree branches; there were deliveries of notes, cards, flowers from across the globe; there were donations of money and meals; and Jews from other cities flocked to Pittsburgh to mourn with us, the prayers from so many lifting us up.

In our community’s most vulnerable state, I stayed focused on those helpers. For months following the attack, busses flickered the slogan “Pittsburgh Strong” instead of their usual route numbers. One evening, as I was returning home to Squirrel Hill by bus, the driver and I chatted briefly about the disaster that befell our community. Movingly, he told me, “It’s terrible what happened to that synagogue, but know that we’re with you.”

I had witnessed something I know to be true in catastrophes — that this attack brought the community closer together with acts of compassion and kindness. Compassion doesn’t have to end in physical action, but the feeling itself starts with empathy towards someone else. Mr. Rogers spent his life attuned to the needs of other people; he’d listen to children and adults compassionately from the depth of his soul. He had a true gift of putting himself in their shoes.

Seeing how the entire city of Pittsburgh, the world at large, and Tom Hanks stood in solidarity with those beloved murdered souls unlocked Judaism’s highest value for me, personally: caring for the other. This senseless tragedy connected me to my Jewish heart and helped me to see how tethered to Pittsburgh, Mister Rogers, and Judaism I’d become. In many ways, the three are spokes of the same wheel. Judaism is a religion of action, and Rogers, too, is a man whose actions are as great as his words.

After the Tree of Life attack, our synagogues transformed into miniature “neighborhoods” or their own. By that, I don’t mean they were separate islands of grief; rather, we were like community lamplighters — helpers — driven to restock our community with light. The Chabad congregation, where my family and I are members, would take on a mezuzah campaign, distributing free mezuzahs to people in the community as a way to offer blessings and security. Jewish community members, including our family, would prepare endless trays of food for the police and the FBI. We went to the Tree of Life to chant psalms as a means to offer healing and solace. As Tree of Life congregants came to our synagogue, we became one united Jewish community again, mourning together and resolute in standing strong together. We will not be clubbed by fear. Am Yisroel Hai – the people of Israel live!

Perhaps this is Mr. Rogers’s greatest legacy — for the Pittsburgh community, and for the increasingly scary world at large: That in our darkest hour, with compassion and kindness as our guide, we can still find our way towards the light. We don’t need to just look for the helpers, we can be the helpers and light the way for others.