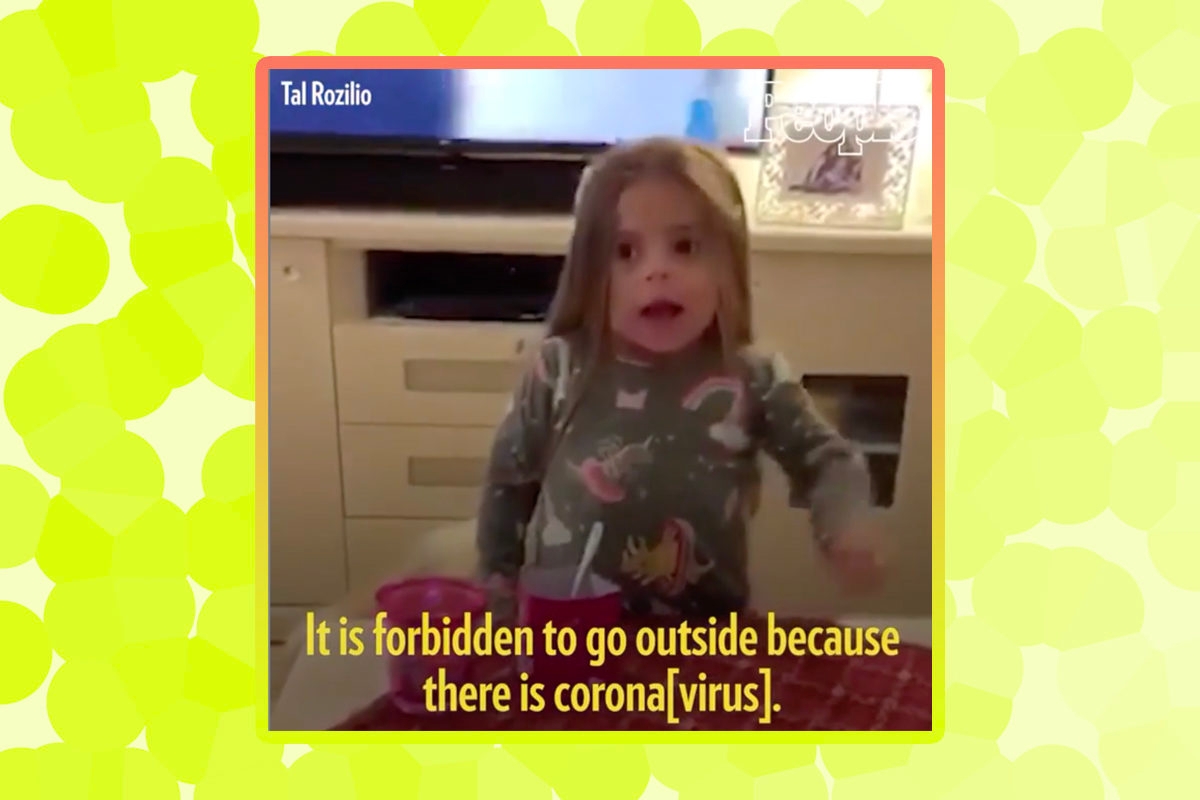 Oriya Atal may not be able to write or read yet, but the 3-year-old recently put together the most eloquent (and adorable!) PSA for why we should all stay home during the coronavirus pandemic.

A home video about social distancing from a little girl from Ramla, Israel has been shared far and wide — by everyone from the Israeli Prime Minister Benjamin Netanyahu to People Magazine.

While Oriya’s parents, Tali and Eli Atal, are accustomed to their daughter’s flair for drama — she likes to impersonate her preschool teacher and pretend to be a cop — they were especially delighted by her performance after they watched Netanyahu’s announcement about social distancing on TV.

“The Prime Minister said not go outside because there is karona[virus]!” little Oraya authoritatively told her parents (her mispronunciation of corona is especially darling), who started filming the adorable speech. She lists all the places you can’t go to (“the mall, the supermarket, the Gymboree.”)  She brings it all home by asking her enraptured audience, “Did you understand me?!”

We live for her seriousness. It’s just so great.

This little one has a PSA on social distancing! | 🎥: @oriyaatal

Since People uploaded the video, Oriya’s important announcement has been watched millions of times and shared by thousands, far and wide.

So does little Oriya understand what’s happening? While she might not know that she’s a new internet sensation, it’s clear that she does understand that this pandemic needs to be taken seriously, as well as a 3-year-old can. “We’re trying to explain it to her to wash her hands as often as possible and not go outside much,” her father told Niv Raskin of Keshet’s Channel 12 News, “She knows her dad is not working and she asks a lot of questions, and we’re trying to answer her and tell her truth, only the truth.”

It’s clear that Oriya has internalized her own lessons: she has already scolded her grandfather for leaving the house. And, in a rare move for most 3-year-olds, who are normally reluctant to recreate anything for the camera, Atal recreated the speech for Channel 12, and even yelled that people should “wash their hands!”

But like any normal kid, Oriya is obviously not happy about the situation. In a follow-up video on her Instagram, the sassy preschooler says, “I’m sick of it already, I want to go to the playground. I’m sick of the fact that … that there’s karona[virus] all day!” Same, Oriya, same.

For Oriya’s parents, who are obviously doing a stellar job raising this little firecracker, the attention and the positive feedback has been a great surprise. More than anything, they told Channel 12 News, “we hope that because of Oriya people will internalize [the severity of] the situation.”

Thank you, Oriya for your important and truly hilarious work advancing the campaign for social distancing. You’re amazing.