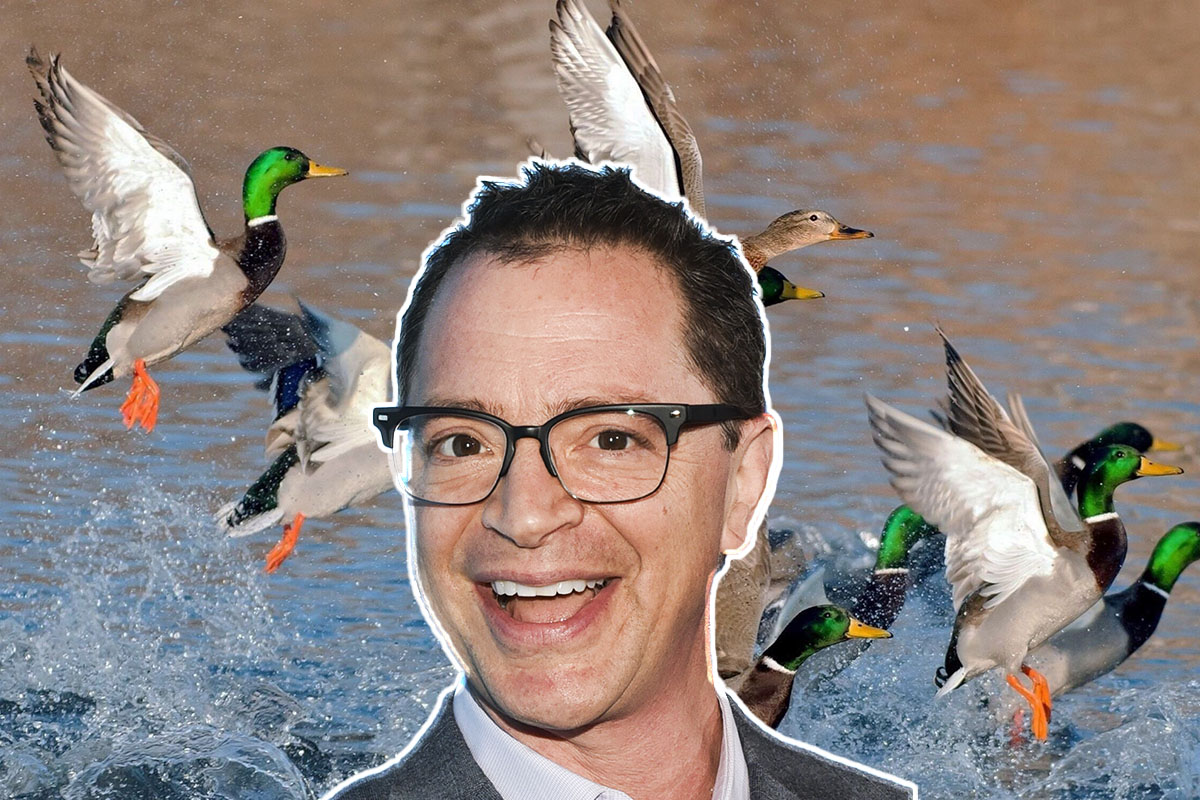 Josh Malina, beloved Jewish dad and actor known for his roles in “The West Wing” and “Scandal,” has blessed our Twitter feed the past few weeks with his detailed (and quite riveting) chronicle of the family of ducks that have made his backyard their home.

Yep, that’s right: It seems that Malina has become a duck dad! (Is a “mazel tov” appropriate here? I think so!) Malina is already a father to two human children — he and his wife, costume designer Melissa Merwin, are parents to Avi and Isabel — whom he shares often on his Instagram.

Here’s a picture of the Malinas and some friends during a socially distanced Thanksgiving:

Malina is a very active Twitter user, and will regularly interact with fans and followers. He uses his platform to spread important news (like vaccine info!), show us little tidbits about his personal life, and even share his thoughts on Jewish issues and antisemitism.

Now, back to the ducks. While Malina didn’t go out of his way, per se, to take in the waterfowl, they’ve certainly taken up residence in his backyard pool, making things a sort of natural adoption on both ends.

According to one of his tweets, it’s actually illegal to remove a mallard nest — not that Malina minded. Rather, Malina says it’s been “a wonderful experience for our family.” The actor also noted, multiple times, that his pool, now confiscated by the duck fam, will not be entered by any human until drained and sanitized. A great reassurance to all of us on #duckwatch.

Josh provided context for the duck situation in one of his first duck tweets on June 17:

Mama duck has been nesting at our house for weeks. Suddenly she’s in the pool w 8 ducklings. I am not sure how they’re going to get out. #duckwatch pic.twitter.com/pALqWuRq46

After concerned Twitter users chimed in, Malina seemed to have set up a little staircase to help the ducklings get out of the pool — which worked! We then learn that he named the mama duck “Destiny,” which seems quite suiting for the way fate brought Malina’s pool and these ducks together.

Keeping a safe distance from mama duck and co., the Malinas provided a backyard oasis for this budding family.

We vacated so that Destiny would feel comfortable leading them to their nest. Full hearts. pic.twitter.com/QLMOFXetxp

Malina updated his followers the next day, showing that the ducks had adjusted rather well to their new environment:

Getting along swimmingly! Destiny stood guard over them all night, and they are up and about for another day in the pool. https://t.co/PxKbC529aa pic.twitter.com/Cbj8iSZmJu

Then, on Friday, June 19, Malina made sure to tweet a lovely “Shabbat shalom” message featuring the duck family. “Shabbos mit der katshke,” he writes — that’s Yiddish for “Shabbat with the ducks.” We love a Jewish dad.

The following Monday, Malina updates the Twitter audience yet again with the cute ducklings, using the hashtag #WetWingWeekly (most certainly a pun on Malina’s podcast “West Wing Weekly,” which ran from 2016 to 2020). His documentation of the ducklings’ growth (and ventures!) feels eerily similar to the many baby scrapbooks and home videos human parents take of their human ducklings:

And…swim time again. It’s been fun watching the little ones develop. They used to follow Destiny quite closely in a tight group. Now they are venturing farther afield. #WetWingWeekly pic.twitter.com/DavjcPwDkI

By June 28, Malina had officially named a few of the ducklings:

So far we’ve named three of the babies: Rogue One, Confit, and Turduckling. pic.twitter.com/FzWOpzJtgd

One of my favorite things is observing Destiny’s incredible mothering skills. Here she is shielding/warming all nine (!) of them while they nap. pic.twitter.com/rg1u5j9nXl

With us? We have convinced ourselves that she knows we are feeding and taking care of everyone, but if u get too close to the little ones, she will FIERCELY protect them. Twice I inadvertently walked near a duckling, and she flew at me. Contact was made! I immediately apologized. https://t.co/mnx7re3Rs2

Two weeks after the first #duckwatch tweet, we get this lighthearted (and relatable) update:

The kids are growing up so quickly! pic.twitter.com/AfN3r621Qi

As of July 5, it’s become clear that what was once Josh Malina’s pool is now a thriving duck pond — or a maybe a duck water park? — for the summer:

Fun at the water park! pic.twitter.com/4HIrgempEN

We are so looking forward to seeing more updates from Josh’s ducks and how much they grow over the summer! You can follow his Twitter, @joshmalina for all the duck content your heart desires.