The Jewish Dads of Television, Ranked – Kveller
Skip to Content Skip to Footer 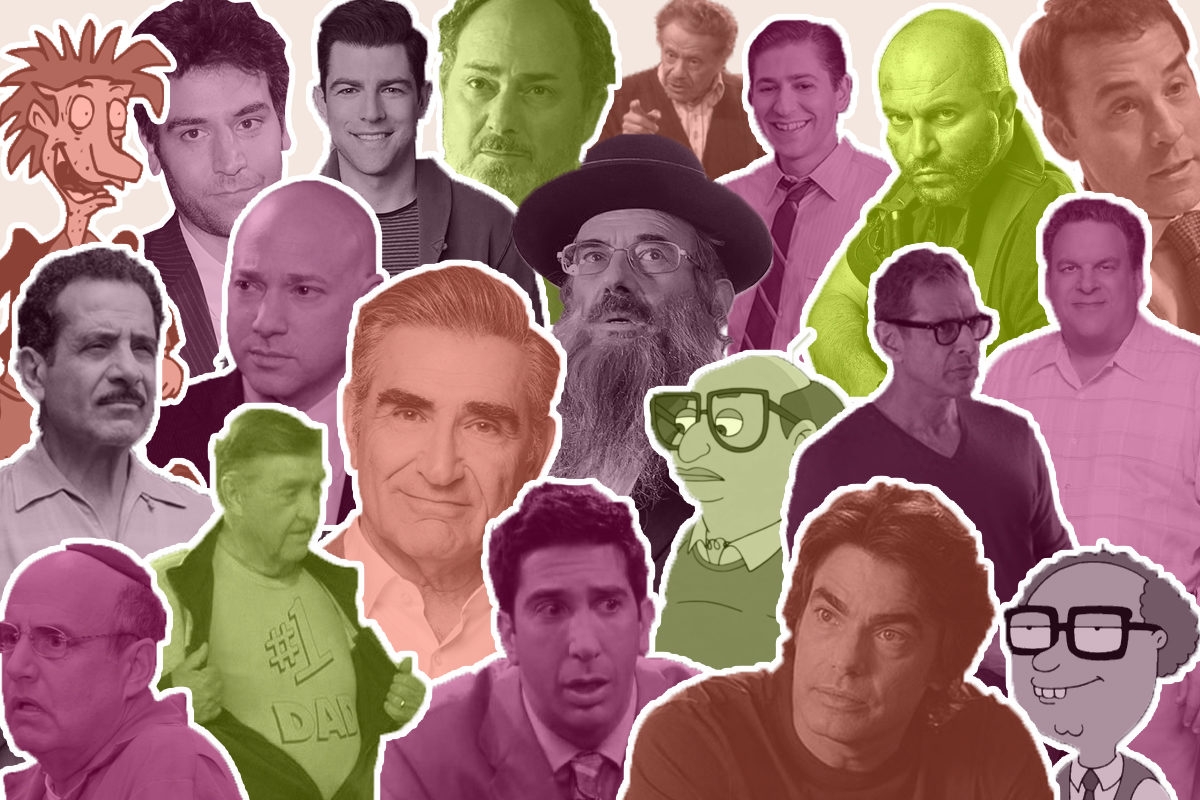 We’re all quite versed in the Jewish mother stereotype: a loud, anxious woman who is a great cook but is also a burden to her children. If she’s not shoving a plate of brisket down her kids’ throats, she’s shopping at Bloomingdales, getting her nails done, or begging her daughter to marry a doctor.

But what about the dads? Is there a trope that encompasses a Jewish father? Not really.

While TV ‘s Jewish mothers are notorious for encompassing pretty negative traits (depending on how you look at it), Jewish dads have pretty much sat this one out. And while, a few years back, JTA took a stab at differentiating the kinds of Jewish dads on TV, there’s much room for interpretation.

And so, after hours of deliberation, the Kveller staff has arrived at this most subjective list of fictional Jewish papas the internet has ever seen. Without further adieu, we present to you the 23 very best, and worst, Jewish patriarchs to grace the small screen.

Jeremy Piven, Jewish actor and infamous creep — multiple women have accused him of sexual misconduct — is known as “the biggest jerk in showbiz.” So it’s fitting that Ari Gold, the role Piven is best known for, is also a colossal d-bag. A father of two, Ari has a foul mouth and literally once said, “I’ll just sexually harass her until she quits.” Need we say more? Nope!

Marty Glouberman is a terrible portrayal of a Jewish dad: Instead of being a doting mensch, Marty is a selfish, rude, inconsiderate schmuck. If his gross obsession with clams isn’t enough, Marty’s disdain for his own child makes him one of the worst Jewish dads on this extensive list. He’s also arguably the most unlikeable character in Big Mouth. Remember when he forcibly waxed his son’s pubescent mustache? We do.

As an actor, Jeffrey Tambor is cancelled: He was fired from Transparent after sexual harassment allegations surfaced. But we’re not here to talk about his #MeToo scandal, we’re here to unpack what a horrible dad George Bluth, Sr. is. Married to a conniving, ruthless woman, George Sr. couldn’t care less about his four dysfunctional children (unless they can make him millions or get him out of jail, that is).

Now, OK, it’s possible that Frank Costanza — father of George Costanza — is Italian, and not Jewish, but we’re including him here anyway, because Seinfeld. Frank is constantly annoying his son, and he has weird phobias: foot odor, rats, and squirrels. Still, when push comes to shove, whether it’s a place to crash or helping him get a job in the bra industry, Frank is always there for George.

If you had to list qualities of Doron, the protagonist of Fauda, “good Dad” would definitely not be among them. (FYI, for those who don’t know, Fauda is an amazing Israeli TV show you can watch on Netflix!) Doron has two kids, and at the start of the series, he’s shown leaving the army and growing grapes with his family. But: He soon leaves them to rejoin his unit. He puts his family in danger and puts himself in danger so frequently, that he can’t possibly have his kids on his mind.

In case you never noticed, Seinfeld is filled with assholes. Really. And you know who’s no exception? Morty Seinfeld. He’s not the worst of the bunch, but he’s certainly not the best. A person is a product of how they were raised, and if Jerry’s childlike character is indicative of his father’s parenting, well, we’re unimpressed.

Dean Hodes is a schlub who cheated on his annoying wife, Celia, but here’s the thing: He’s kind of a good dad. Kind of. His older daughter, Quinn, was shipped off to boarding school in Mexico after she spilled the beans about his affair, but his relationship with his younger daughter, Isabel, grows stronger each subsequent season. Celia constantly berated Isabel for “inheriting Dean’s unfortunate build” (um, RUDE), which strengthened the father-daughter relationship as he always supported her, no matter what she weighed.

As Shtisel opens, Lippe is portrayed as a kind, loving dad, off to provide for his family working at a kosher slaughterhouse overseas. But we soon discover that Lippe abandoned his wife and four children, including his infant son, leaving them penniless — which is about as “bad dad” as they come. The amount of distress Lippe causes his wife and eldest daughter, who have to hold their family together, is honestly criminal.

Ross kind of sucks! Remember when he got upset when his son, Ben, was playing with a Barbie? Or annoyed at the concept of “male nannies,” or how controlling he was over Rachel? (Here’s a helpful list over at Buzzfeed: 30 Moments That Prove Ross Geller Is Literally The Worst.) But, in all fairness, he did care deeply for his kids and wanted what was best for them. He was just an annoying dude.

Oh, Joel. We’re not sure how to feel about you. You didn’t really seem to care about your family, but maybe you’re pivoting. (Also: Is Midge that great of a mom herself? Talk amongst yourselves!) He ends up supportive of Midge, but his betrayal in season one is what pushes her into comedy. Basically: ugh. We hope you move up higher on this list during season three!

Murray Goldman is a good guy, but he calls his kids morons, which is incredibly damaging. Deep down, however, The Goldbergs‘ patriarch loves his rambunctious, rule-breaking children, and in every episode he reveals a glimmer of sweetness.

Moishe, like fellow Maisel dad Abe, has ideas about what he thinks his son should be doing. He even supports him financially when he hires Joel to come work for him. And, he’s a really funny guy. He’s definitely not the best — like that time he told Joel, “shiksas are for practice” — but definitely not the worst.

Is there a more stereotypical Jewish TV character than Mortimer Goldman? We’re not sure. But next to Meg Griffin, Mort is pretty much the punching bag on Family Guy: He’s neurotic, nerdy, and has terrible social skills, and his pharmacy is constantly being ransacked by the neighborhood. He’s an annoying wimp and a terrible role model for his son, Neil. But, as a single parent, Mort needs all the support he can get. So, we threw him a bone and ranked him here.

10. Ted Mosby (Josh Radnor, How I Met Your Mother)

The entirety of How I Met Your Mother revolves around Ted Mosby telling his son and daughter the very, very long and winding tale of how he met their mother — duh. The thing is, we have no idea what his parenting skills are like. What we do know is that Ted (half-Jewish) is a hopeless romantic who’d do anything for his best friends, and is very transparent with his children. Honesty for the win!

A child stuck in a perpetual 35-year-old adult body, inventor extraordinaire Stu Pickles is a lovable Jewish dad. Is he a good Jewish dad? Not really. Although he lives to create toys for his son, Tommy, never forget the time he lost his son and didn’t even notice until the cops returned him. Oh, and one of his inventions was a cushioned helmet designed to protect Tommy from danger while he and his wife left him unsupervised. Still, points for creativity!

Shulem Shtisel is the patriarch of the Shtisel family, from the eponymous Israeli show which became a huge hit on Netflix. Played by Doval’e Glickman, who is truly an Israeli national treasure, Shulem is a stubborn man, which often comes at a steep cost, especially when it relates to his children. The food-loving ultra-Orthodox teacher can be a warm and nurturing presence, especially when trying to help his daughter Gitti after a traumatic pregnancy, but often seems to choose his pride (and his money-making schemes) over his progeny. Still, the love is there, and we can’t help but love him.

Yes, Harry Goldenblatt is a mensch. So why isn’t he higher up on this list? Honestly, it’s because we don’t really know what he’s like as a father. What we do know is that he’s crazy for his wife, Charlotte York Goldenblatt, who was so smitten with the Sex and the City dad’s Jewish compassion and kindness that she converted to Judaism. To top it off, when Charlotte told Harry she couldn’t bear children, he said they’d adopt — they did — a child who they’d love no matter what. Aw!

OK, so, Abe may not be the best dad (see how controlling he is after finding out about Midge’s stand-up-career), but he is a fantastic character. (Can we talk about his workout romper in season two!?) Abe just wants what’s best for his kids — and eventually comes around to his daughter’s burgeoning comedy career. He has a good heart underneath his gruff exterior.

Jack Gellar wasn’t the best dad. He favored his son, Ross, over his daughter, Monica, and is notorious for his inappropriate comments. But you know what? Jack is hilarious, and we love him. Let’s not forget when he gave Monica — he affectionately called her “Harmonica”— his beloved Porsche after her childhood memorabilia was ruined in a flood, and comforted her after she broke up with her boyfriend, who was actually his longtime friend, Richard Burke (he famously disapproved of their relationship). Jack for the win!

Who doesn’t love Winston Saint-Marie Schmidt? Though his middle name is deceiving, Schmidt is one of the nicest Jewish husbands on television. Narcissistic? Sure. Over the top? You betcha. But Schmidt, sarcasm and all, has a heart of gold and exemplifies what it means to act like a mensch. Although we don’t see him in his role as a stay-at-home dad until season 5 of New Girl, Schmidt fills the role of exemplary Jewish papa to his daughter Ruth.

Probably the nicest Jewish dad out there, Sandy Cohen, the handsome patriarch from The O.C., could always be relied upon when Seth and Ryan were in trouble, or in need of some romantic advice, which they almost always seemed to be. A calm, nurturing father and a loving husband, Sandy was always a total mensch! And he never forgot his Jewish roots, despite marrying into a stuffy Newport family — the family famously celebrated Chrismukkah.

What makes Hiram Berry worthy of the #2 position? For one, he’s portrayed by Jewish actor and everyone’s heartthrob, Jeff Goldblum, but, more important, he’s a doting, loving, gay Jewish dad. Hiram would do anything for his darling daughter Rachel, and even went so far as planning a fake epileptic seizure to stop her from marrying her classmate Finn. Is that the sign of a good father? Debatable. But when push comes to shove, he’s a top-notch papa.

Johnny Rose is the emotional heart of Schitt’s Creek, the best Jewish TV show. Played to perfection by Eugene Levy, Johnny is a slightly-out-of-touch Jewish dad who just wants his family to be OK. We love the tidbits of his family’s history — like how he used to play on “the Flying Latkes” baseball team in Hebrew school — and how he leans into his family’s interfaith identity. With his kind heart and easygoing demeanor, he’s the best.