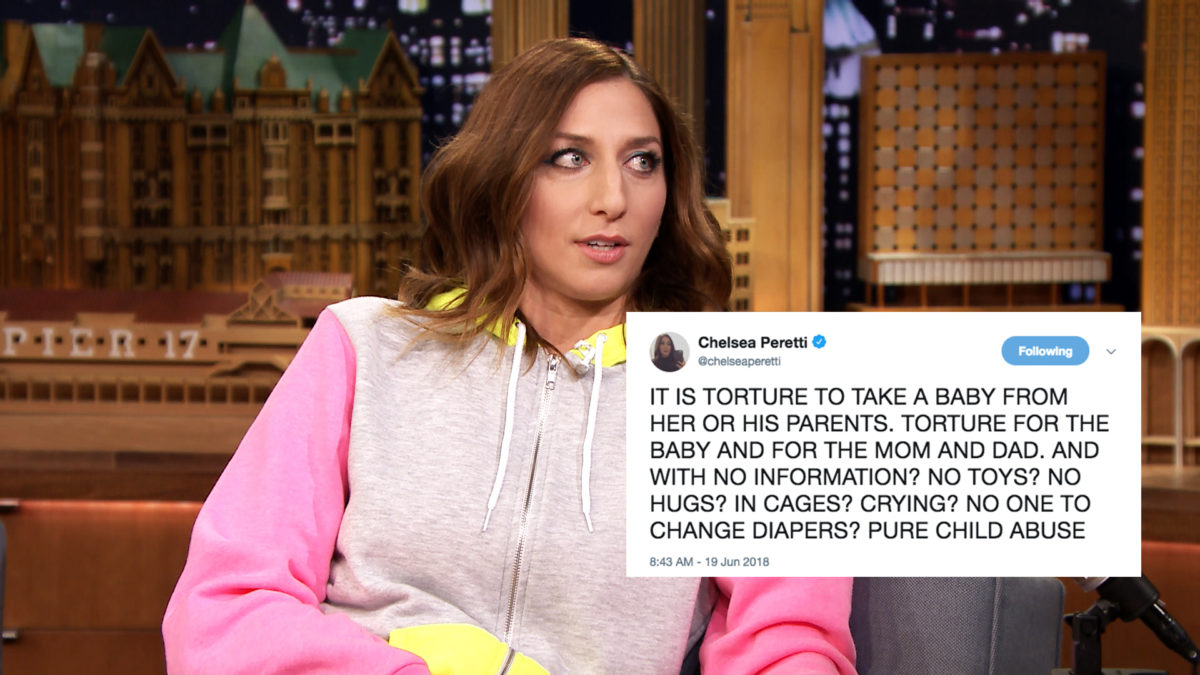 The Jewish mom of 11-month-old Beaumont Gino Peele cleverly uses the platform for activism — with a healthy does of humor. To her nearly 1 million followers, she regularly types in all caps as she calls out the Trump administration. As she writes in her Twitter bio, “One of the Greats. Brooklyn Nine Nine. Hour stand-up special on Netflix. Podcast on itunes. CAPS AREN’T YELLING THEY R ACTION MOVIE LEVEL INTENSITY TWEETING.”

And, if we’re being honest, most of her Twitter is “action movie level intensity.”

Peretti joined Twitter in September 2009 and mostly used the platform for jokes. But that all changed with the 2016 election, when her tweets began to take on more of a political tone.

OK SO TRUMP DID U REPORT THE VIOLENT PEOPLE AT YOUR EVENTS OR DID U ENCOURAGE THEM TO VIOLENCE?

What’s so refreshing about her Peretti’s Twitter, in comparison to many celebrities, is that you actually feel her outrage through the use of caps. Take the below tweet from May: Peretti, in all caps, exclaims she cannot believe that “school shootings” is an actual phrase we use on the regular. It is ridiculous! It does deserve to be shouted from the rooftops! By tweeting in all-caps, she is effective.

I TRULY CANNOT WRAP MY HEAD AROUND IT. WE AS A COUNTRY HAVE A TERM CALLED “SCHOOL SHOOTINGS”

Another powerful way Peretti uses her platform is to retweet news accounts and call them out. (A favorite of hers to retweet and comment back at is The Hill.)

She also finds ways to turn the lighthearted tweets into commentary on the shocking state of events. For example, after the Charlottesville neo-Nazi march, when someone joked, “what’s worse – white people saying ‘lit’ or white people saying ‘shook’?” she replied: “I think ‘jews will not replace us’ is a major contender.”

Her Jewish identity surfaces on the regular — even how Trump supporters sometimes call her a “Jew” on social media.

Peretti’s direct to-the-point style catches your attention in the endless scroll of Twitter; it’s hard not to get caught on her all-caps reminders. 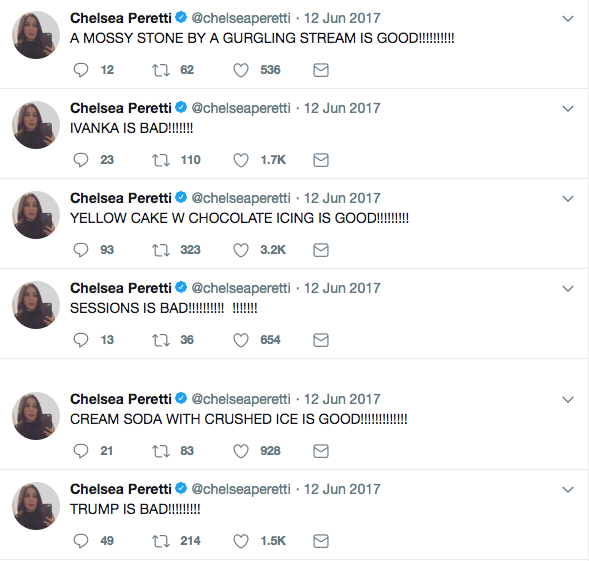 IT IS TORTURE TO TAKE A BABY FROM HER OR HIS PARENTS. TORTURE FOR THE BABY AND FOR THE MOM AND DAD. AND WITH NO INFORMATION? NO TOYS? NO HUGS? IN CAGES? CRYING? NO ONE TO CHANGE DIAPERS? PURE CHILD ABUSE

As a human and a mother, Peretti is keeping it real — and we love her for it.

Go follow @ChelseaPeretti. You won’t regret it, we promise.