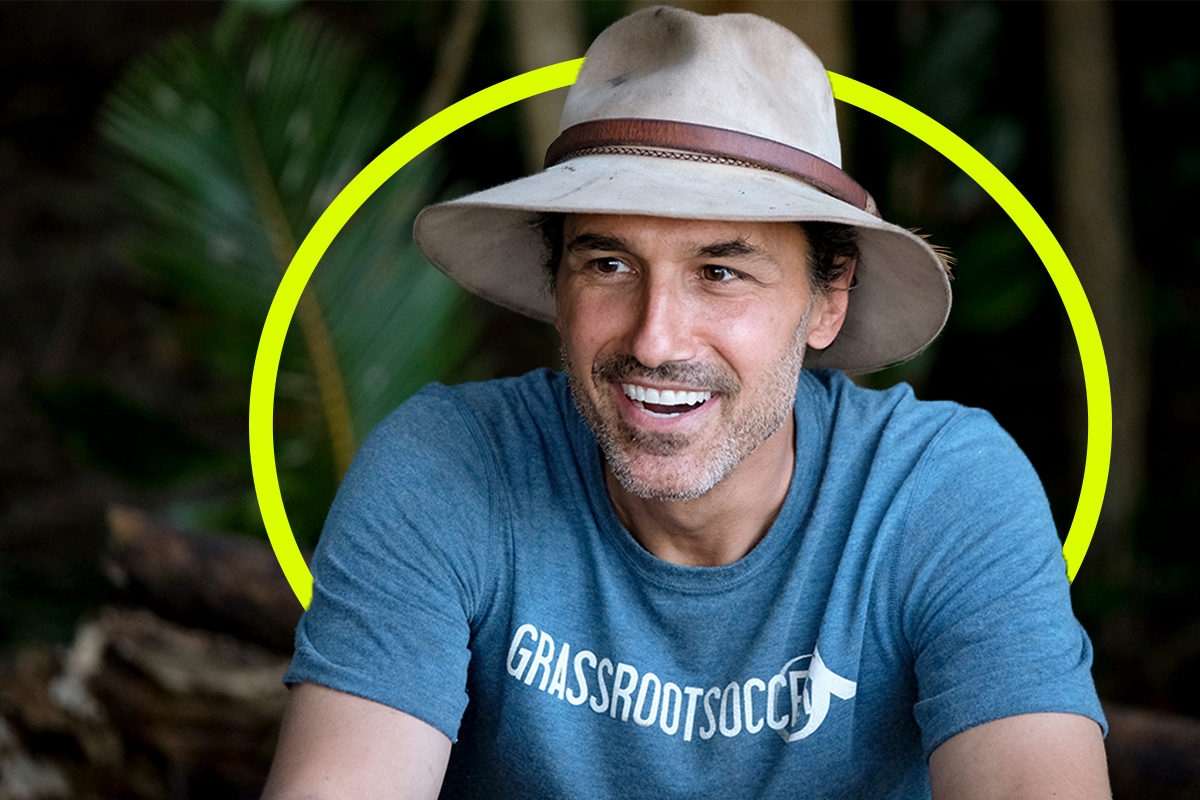 Can you spoil reality TV? We aren’t sure, but just in case… Spoilers ahead for Survivor: Winners at War.

Jewish Survivor contestant and all-around mensch Ethan Zohn was 27 years old when he became the reality competition’s third-ever winner in 2001. At the time, he was a professional soccer player. He competed again in Survivor All-Stars in 2003, and now, at 46, he’s back as a contestant in the all-champion edition that’s currently airing on CBS, Survivor: Winners at War.

It’s a remarkable feat considering that, following a difficult battle with cancer, Zohn was unsure if he’d be alive to watch the 40th(!) season of the OG reality competition, let alone compete in it. 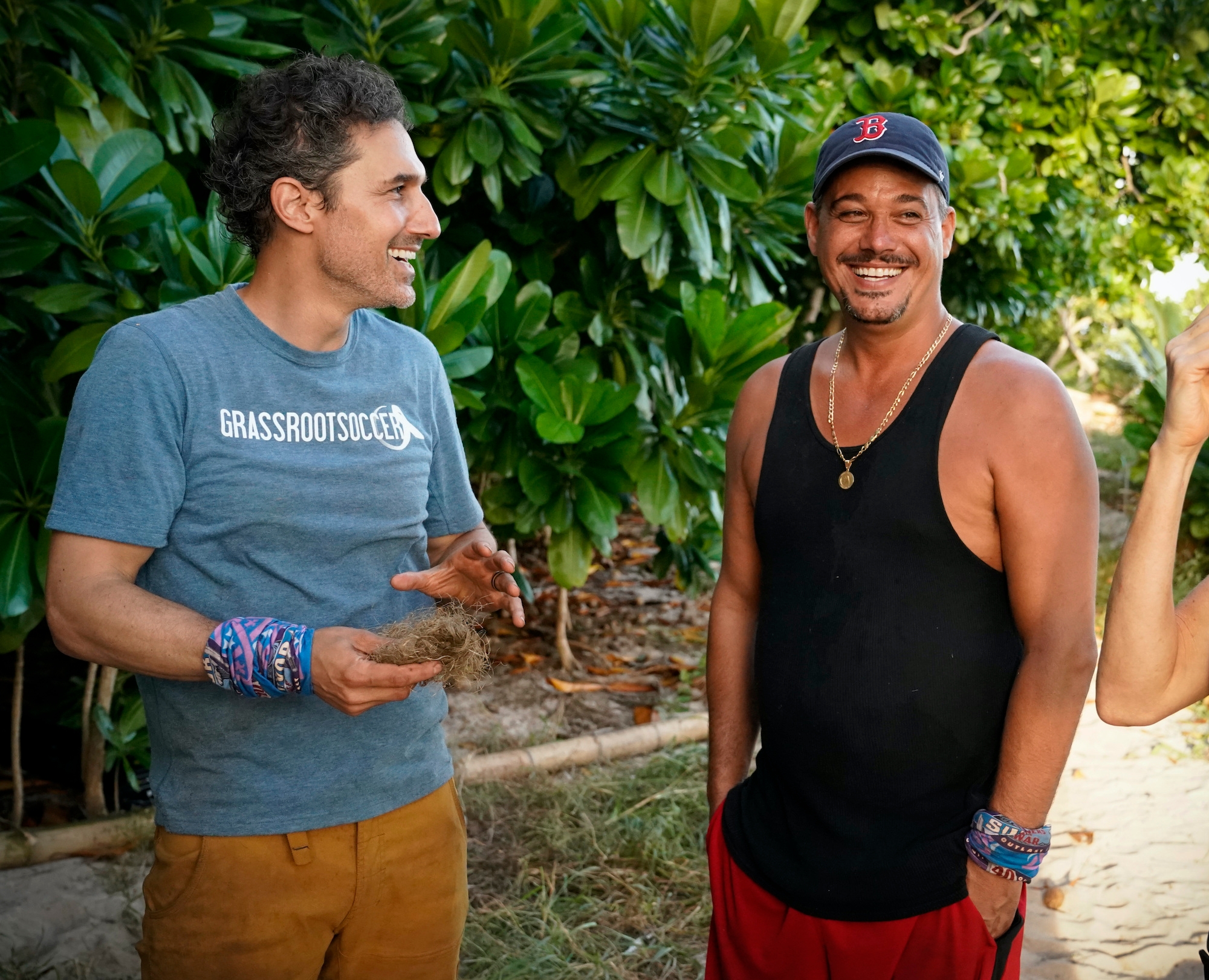 “I’m now an old, neurotic Jewish guy, married with two cats,” Zohn told TV Insider. “I’m in a different place in my life. Just to get myself in a place mentally, physically, spiritually to take on something like Survivor because it’s not just you go out there and play. You’ve got to get yourself in shape. You got to get your brain set. You’re away from your family and friends and everything you’re accustomed to. There is no contact with the outside world. I’ve been living a nice comfortable life for a while. To get away from that was difficult for me.”

Of course, if anyone is equipped to surmount challenges, it’s Zohn. After winning Survivor: Africa, he used part of his $1 million prize to start Grassroot Soccer, a nonprofit organization that “uses the power of soccer” to help combat the AIDS epidemic in Africa. He also worked as a soccer commentator, reporting from the 2002 Men’s World Cup in Korea and Japan, and later joining the Fox Soccer channel.

Then, in April 2009, Zohn was diagnosed with cancer: CD20-positive Hodgkin’s lymphoma. He began chemotherapy in May 2009; later that year, he underwent a stem-cell transplant. In April 2010, he went in remission, but his cancer returned in September 2011.

Here's to all the fighters and survivors, families and caregivers, doctors and nurses, researchers and fundraisers that are helping to vote cancer off the planet. I'm thankful to be in remission eight years. #CancerSurvivor #Survivor #HodgkinsLymphoma #BloodCancerAwarenessMonth #WorldCancerDay #lymphomaniac

In March 2013, Zohn announced he had been cancer-free for a year, thanks to stem cell transplants from his brother. That same year, he ran the Boston Marathon, and was far away enough from the bombings that he was uninjured. (Yes, he’s a true survivor.) In 2014, he returned to the marathon as a correspondent — an emotional experience, as many survivors of the bombings ran again.

Zohn grew up in a Jewish family in Lexington, Massachusetts. In 1997, Zohn competed in the Maccabi games, playing for the U.S. soccer team in Israel. He is outspoken about his Jewish identity, and credits his upbringing for his Survivor: Africa win.

At a JNF breakfast in Pittsburgh in May 2019, he said, “The values I learned growing up in the Jewish community worked well with the people that were there. It was more about being selfless in a selfish game, being the teacher, being a member of the community, being a leader who works well with other people. Those are the things I learned growing up within the Jewish people.” (Zohn also works as an inspirational speaker.)

But that’s not all. Zohn’s biggest pet peeve, according to his official Survivor bio, is “weird bagel flavors. It’s not a bagel unless it’s sesame, poppy, plain, or everything.” (Honestly, agreed!) Zohn often makes Jewish jokes on social media; for example, he posted a photo of his cat, claiming she ate the afikomen at Passover:

Chag Sameach. What is on your Matza? I like it with a little butter and salt.

There were some hilarious moments where Zohn’s Jewishness came up on Survivor: Africa:

Most hilarious moment in the history of Survivor(according to me).When asked what scenes from from #Africa you want to see.The #BigTom “He’s a Jew& won’t eat the ham” Food Auction was most requested. After 30 days, I still didn’t eat the ham!#survivor #ham #jewish @survivorcbs pic.twitter.com/CdJ661KFd9

In 2016, Zohn married interior designer Lisa Heywood in a Jewish ceremony in Vermont.

Once Zohn got the call in January about competing in Winners at War — which features all the champions from previous seasons — he instantly agreed, saying, after his health challenges, it was a “huge gift” to be able to compete again. But he realized had to make some changes in his life, starting with moving from New Hampshire to Atlanta in order to train in warm weather.

“I knew I had to get off the couch and stop smoking weed; cannabis and CBD have been huge in helping my post-cancer anxiety, medically speaking,” he told Parade. “I started training outside. I was swimming, doing puzzles, reading body language, and lip reading books. I met with my shrink; my wife hid idols in the forest for me to find every day. I thought, ‘If I’m going to do this, to ease my fears that I’m an old-schooler who has no place in the modern game, I want to get ready.'” 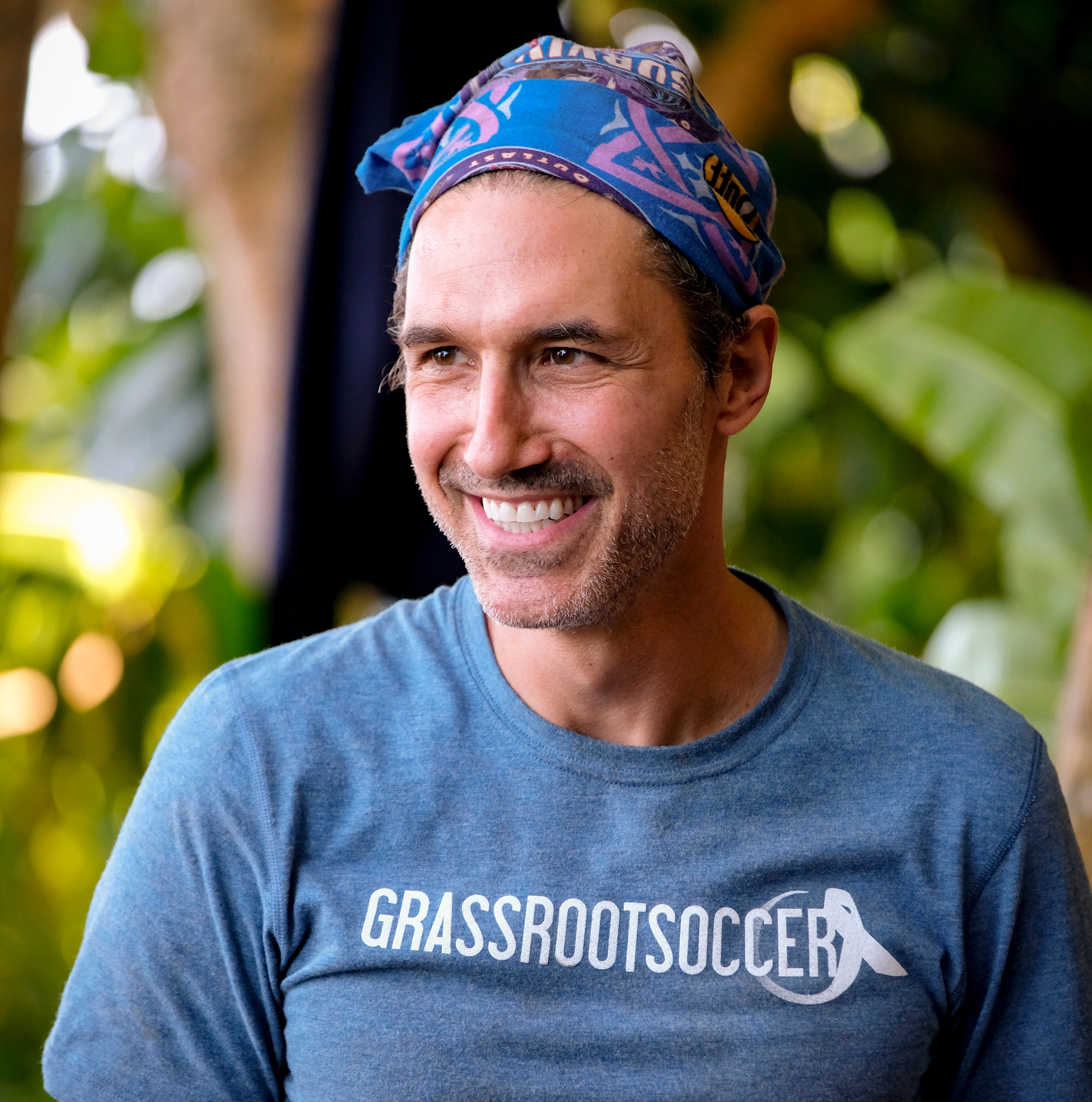 Ethan Zohn on the 40th season of Survivor wearing a Grassroots Soccer t-shirt.

He also re-watched his season of Survivor: Africa, which proved difficult. As Zohn said, “I’m 27 years old back then, former professional soccer player, single, I was on top of the world. Nothing could stop me.”

As an elder, his strategy going into Winners at War was to research all the other players. One player, Adam Klein, stuck out to him. Why? “I knew that Adam was a superfan and he’s Jewish, his mom had cancer,” he said. “I felt like we could have a good bond together.” 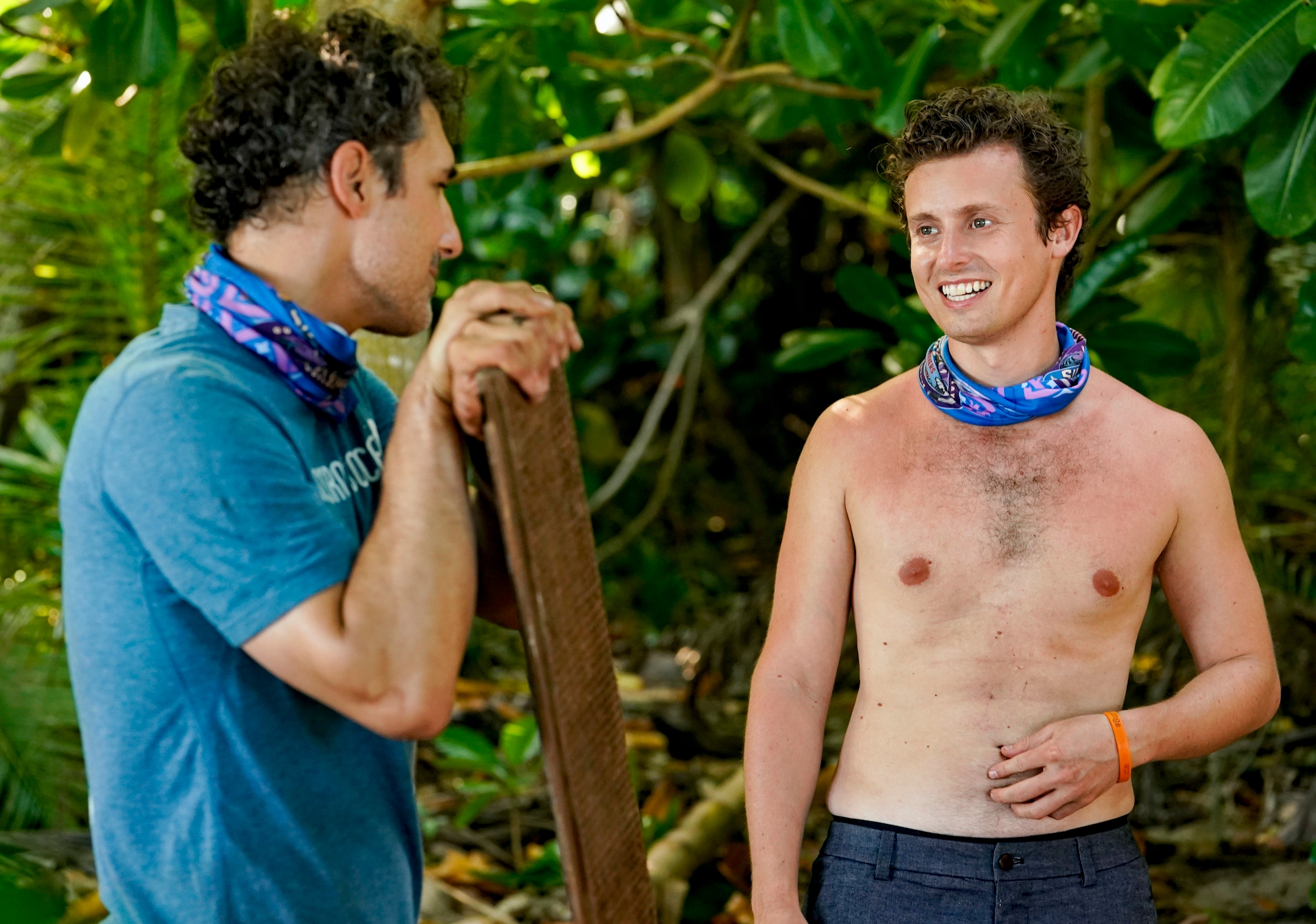 Ethan Zohn and Adam Klein on Survivor: Winners at War

In the premiere, Zohn said, “I remember dreaming and praying that I’d be alive long enough to play Survivor again, and so it’s a miracle that I’m sitting here today.”

In the third episode, he was voted out — but in a twist of this season, he headed to the “Edge of Extinction,” where voted-off-contestants have the ability to return. So, we are likely to continue to watch Zohn compete this season.

Still, since he was initially voted off, a bunch of interviews with Zohn have been published in recent days, and he’s admitted that it was possibly a mistake for him to return to the show. 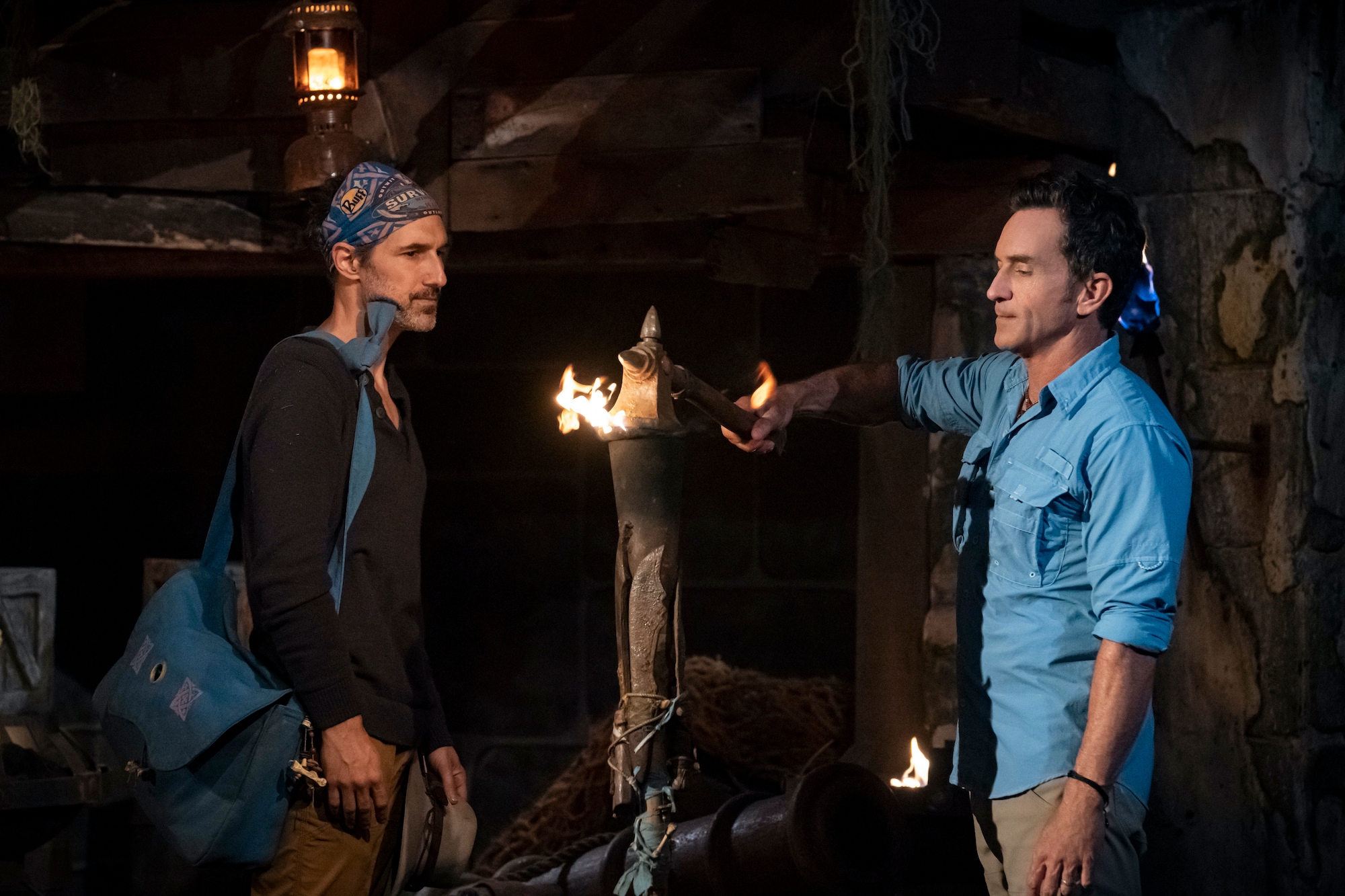 “I don’t think it was a smart decision to play this time, but I think it would be an even worse decision to go next time, health-wise,” Zohn said, adding that he would not compete again.

“Building yourself back up after cancer is a difficult process…” he told ET Online. “I did my first two Survivors, then I had to go through cancer twice and build myself back up and here I go out there and do it again, it’s just a lot on you as a human being.”