The Amazing Jewish Songwriter Behind ‘Rent’ and ‘Tick, Tick… Boom!’ 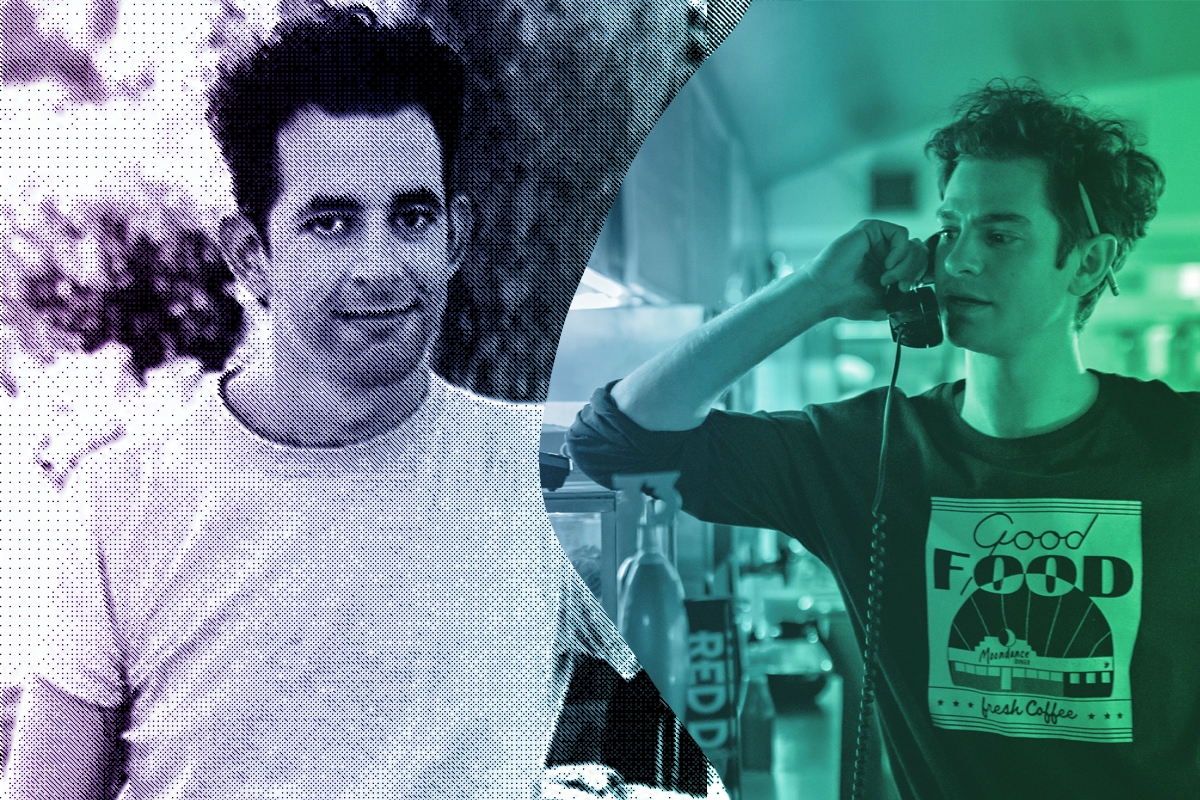 The new movie “Tick, Tick… Boom!,” a film adaptation of Jewish playwright Jonathan Larson’s 1990 musical directed by Lin-Manuel Miranda and starring Andrew Garfield, opened on November 12, and is about to land on Netflix this week.

The movie, a semi-fictionalized version of the “Rent” playwright’s life, offers plenty of Yiddishkeit, including mentions of challah and Kaddish and great Jewish actors in Jewish roles — including Judith Light as Jonathan’s agent and Joel Grey as his father, Allen.

But the real-life story of Larson is just as worthy of our attention. Larson wrote over 200 songs in his lifetime before dying at age 35 from an aortic dissection, believed to have been caused by an undiagnosed case of Marfan syndrome. The playwright was very much shaped by his Jewish collaborators and supporters — but before that, by his Jewish parents and sister.

Larson was born in White Plains, New York, and had a pretty idyllic, middle-class Jewish upbringing with his parents Nan (Nanette) and Allen, and his older sister, Julie. One of Larson’s earliest musical theater successes was being cast as Tevye in his school’s production of “Fiddler on the Roof.” He later went on to study acting at Adelphi University, then moved to Manhattan to pursue his musical theater dreams. Those dreams and his passion for musicals may have been shaped by his parents.

“[Nan] was probably the person who most introduced us to the arts,” Julie Larson told Playbill in 2016. “When she was young, she played the piano…. growing up, she is the one who would take us to see shows. She always had a huge appreciation for the arts and instilled that in us.”

“There was definitely opera blasting on the weekends when my dad was puttering,” Julie continued. “And we owned pretty much every Broadway musical album. Jonnie and I would sit there, and we would listen to the music and follow along — you know on the back side they would always have the synopsis of every song and what was happening in the story. We did an awful lot of that. In addition, our family was very influenced by folk music — listening to the Weavers, Pete Seeger and Paul Robeson. A lot of songs from the labor movement. Songs of work and struggle.”

Songs about work and struggle became a strong feature of Larson’s plays — struggles of gender and class, homophobia and the AIDs crisis. Opera also played a key role in Larson’s career, as “Rent” was inspired by the Puccini opera “La Bohème,” though the idea to create a modern-day version of the opera set in New York came from another Jewish collaborator, playwright Billy Aronson, who first discussed the project with Larson over a drink of lemonade. Aronson later gave Larson free rein over the project.

Before “Rent,” Larson spent over a decade trying to jumpstart his theatrical career. And while he was prolific, like so many famous artists, he never gained any financial success while he was alive. Larson’s “Superbia,” the musical based on George Orwell’s “1984,” was a flop. But it did gain the attention of one of Larson’s idols — Jewish musical theater maven Stephen Sondheim, who is also featured in “Tick, Tick… Boom!” (a few of the songs in that play were inspired by “Sunday in the Park with George”).

“Stephen Sondheim was God,” a friend recalled at Larson’s funeral. Sondheim was a fan of Larson’s music and supported him throughout his career.

“He has been a huge supporter of my work for 12 years,” Larson said during his last interview with the New York Times, the night before his death. “Whenever I have a problem, he is always there.”

“Tick, Tick… Boom!” came after “Superbia,” an expression of rage and frustration about his fledgling artistic career, but that play never took off during Larson’s lifetime either — though a 2001 revival, which reshaped the narrative of the play, was quite successful.

The musical was an important precursor to “Rent.” According to Larson’s friend and documentary filmmaker Edward Rosenstein, it was a way for Larson to vent his frustrations and move on: “How could he kvetch about his struggles when friends were dying? The peacefulness and affirmation that everyone finds in ‘Rent’ — that came to Jonathan only in the last five years.”

Larson’s life in New York was what gave “Rent” its shape, specifically his friendships with Rosenstein and Jonathan Burkhart, and his childhood friend, Matthew O’Grady, who was diagnosed as HIV positive. Of course, life in his Greenwich Village 4th-floor walkup apartment played an important role, where, much like in the play, the songwriter and his roommates sometimes lit an open fire to keep warm.

“It looked like it hadn’t been sanitized in 50 years,” Larson’s father Allen told The New York Times about the apartment. “It was the kind of place my father, a Russian Jewish immigrant, probably lived in when he came here in 1900. But Jonathan loved his life. And he was not a dilettante, sitting there saying, ‘Dad, send me money because I’m writing the great American opus.'”

Though not central to the story, traces of Larson’s Judaism can be found in “Rent.” Like Larson, Mark Cohen, the lead character, is Jewish — he learned to waltz “with Nanette Himmelfarb. The Rabbi’s daughter at the Scarsdale Jewish Community Center,” and receives voicemail messages from his Jewish mom.

Yet, despite the fact that Larson had amazing collaborators in the New York theater world, he continued to use his family as his sounding board for his musical world, including for “Rent”:

“We knew every beat, every note. He would send us cassette tapes of whatever the latest songs were. He would call me — because I lived on the west coast — sometimes when it was too late for him to call his friends to get input on what he was working on,” Julie Larson told Playbill. “You know, he worked late into the night. He would call me and he’d just say, ‘Here — listen,’ and play the latest of whatever he was working on.”

The songs also became a way for Larson to communicate with his nephews. Julie added that a cassette tape full of Larson’s songs “was part of Matthew and Dylan’s [my sons’] lullabies. It was just Jon singing with his keyboards as the songs were developing. Jon’s nephews [were] the light of his life. He adored them, and ‘Unky,’ as he was called by them, was their favorite person on the planet.”

Tragically, Larson died the day before “Rent” opened for previews, as his family was planning to come out to see the show. He was just 35 years old.

It was the rest of the team’s job to help give the play its final shape, including Jewish director Michael Grief (who later went on to direct “Dear Evan Hansen”).

After his death, Larson’s family continued to be his creative collaborators and champions. They oversaw his work through a company called Skeeziks (that was his father’s nickname for him, after a character in “Gasoline Alley”). They met with productions of “Rent” across the world to discuss the legacy of their son and to support the young actors.

“As I’ve said over and over, I was in a total funk for several years after Jon died, and — even though I hadn’t the slightest idea of what I was doing — had this mad urge to make sure everyone understood that it was Jonnie’s show,” Allen said, “to be presented as if he was there keeping everyone on their toes.”

And now, a Jewish actor is telling his life story — for Andrew Garfield, being cast as Larson meant finding a kinship with the deceased actor: “When I started to understand who Jonathan Larson was, it was as if Lin was re-introducing me to a long-lost brother I didn’t know I had, like an older brother I felt a kinship with,” Garfield said Sunday during Deadline’s Contenders Film: Los Angeles at the DGA Theater. “Someone who’s a revolutionary, someone who saw the heartbreak of the world around him and turned it into beauty.”

When Lin Manuel-Miranda, who played Larson in the production of “Tick, Tick… Boom!” in the Encores Off Center Revival in 2004, decided to adapt it into a movie, Julie was brought on as an executive producer and worked closely with the director and the team, including Jewish screenwriter Steven Levenson.

“Even beyond all the wisdom and insight Julie shared with us, the experience of sitting on set with her and watching her brother’s story through her eyes reminded us every day of our responsibility to get it right and do justice to Jon’s extraordinary vision,” Levenson told Town and Country.

“Sitting there watching Andrew [Garfield] do such a beautiful job, sometimes I would feel like I was sharing time with my brother,” Julie told the magazine. “It was both very lovely and eerie at times.”

“It’s always very complicated, emotionally. This has been the loveliest experience, and everyone who worked on the production is so passionate. I hope it will be received that way. I was on set and very involved, but sometimes I had to walk away. It felt like I was sharing time with my brother. It’s always complicated. We can never have a clear emotion of pure joy or pure whatever. It’s just always there. But I couldn’t be more proud of what’s been done and what we accomplished,” Julie told The Boston Globe.

With this new movie, and with the musical immortality of “Rent,” Larson’s memory — and music — continue to be a blessing for us all.