Lin-Manuel Miranda Tweets in Hebrew, Bringing Joy to Jews All Over – Kveller
Skip to Content Skip to Footer

Lin-Manuel Miranda Tweets in Hebrew, Bringing Joy to Jews All Over 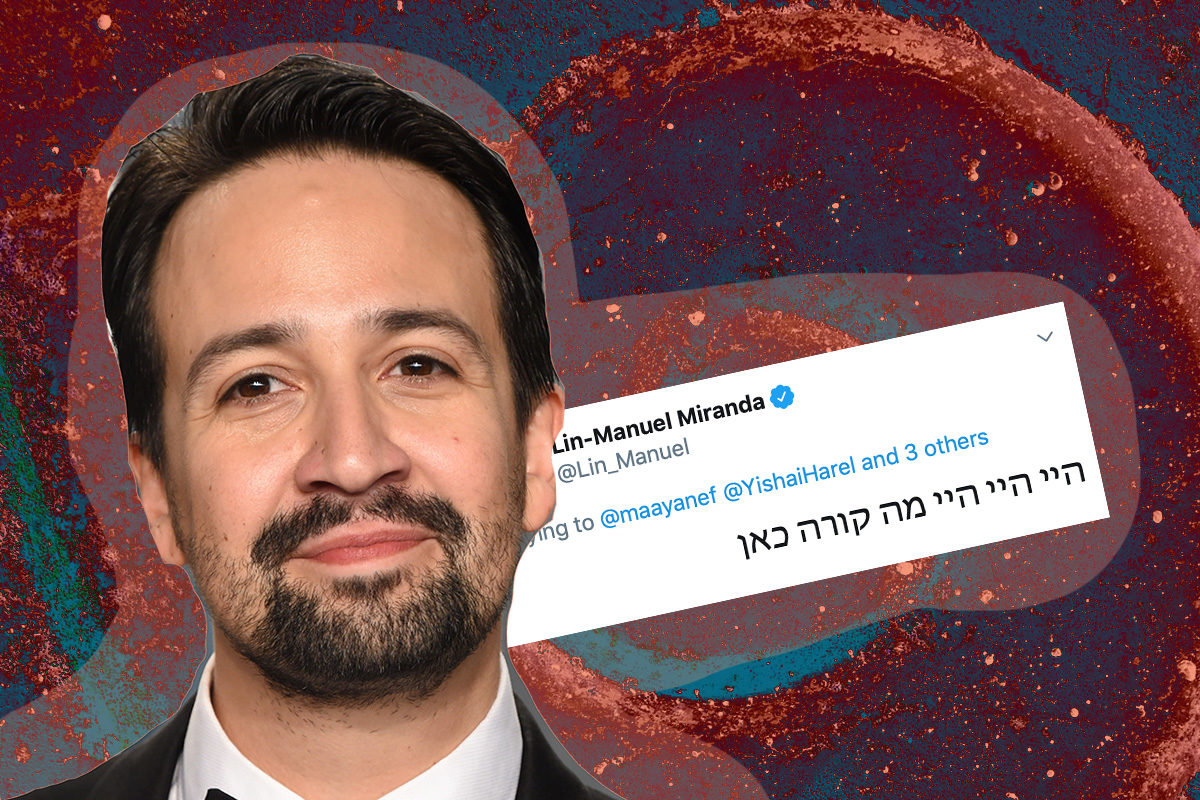 Lin-Manuel Miranda is the person to follow on Twitter if you need a dose of happiness — he’s an engaging delight. And this week, he gave us all a special thrill when he tweeted in Hebrew. Yes, really!

Right, the Hamilton creator is not Jewish, but, in my eyes, he is most certainly an honorary member of the tribe. Have you seen him sing “To Life!” from Fiddler on the Roof on his wedding day?! Did you know he was a bar/bat mitzvah dancer and part of a Jewish a capella group in college? Have you heard him sing in Hebrew? He’s better than a lot of Hebrew school graduates I know!

But back to Miranda’s Hebrew tweet — here’s how it all went down. Elad Simchayoff, an Israeli journalist reporting about the coronavirus in Europe — who, like the rest of us, is  stuck at home with his kids — tweeted this on Wednesday: “Mental state: this morning, Guri Alfi and Galit Hoogi [two funny Israeli comedians who host a radio show on 102 FM in Israel] asked me to choose any song in the world for the broadcasting and I chose the theme song from Moana.”

As someone who has has been humming songs by my kid’s favorite entertainer, Hopalong Andrew, to herself all week, honestly, I relate. As did Alfi, the radio show’s co-host and a father of four, who sang and danced along as he broadcast the song.

Another reporter, Reshet’s Nadav Eyal, responded to Simchayoff’s tweet with: “honestly, I would do the same thing.”

That’s when a third Israeli reporter, Yishai Harel, tagged Lin-Manuel on the Twitter chain: “@Lin_manuel’s greatest creation, a little before Hamilton,” he tweeted.

Maayan Efrat, an obvious “Mirandastan,” responded with a correction, that, chronologically speaking, Moana actually came  “a little after — Hamilton opened in 2015 and was an instant sensation.”

To which Harel retorted that the whole thing was a joke. But Efrat, a Lin-Manuel superfan, was not willing to let it slide: “I protest this too, In the Heights is a much better creation.”

And so, Lin-Manuel, like the internet superhero that he is, interfered before things got too heated up. He wrote in Hebrew: “Hey hey hey what’s going on here”.

People responded with awe and associated GIFs (and Efrat and Eyal of course, rushed to translate their discussion.) “I’m ovulating,” wrote one excited responder.

And of course, someone responded with the prerequisite GIF of a line from the Hamilton musical (“The Schuyler Sisters” and “That Would Be Enough”): “Look around, look around, how lucky we are to be alive right now!”

While we might not be feeling very lucky to be alive in these days of the coronavirus, we are definitely lucky and blessed to have Lin-Manuel Miranda around. Thank you for giving us so much joy, Lin-Manuel! You are a real mensch.