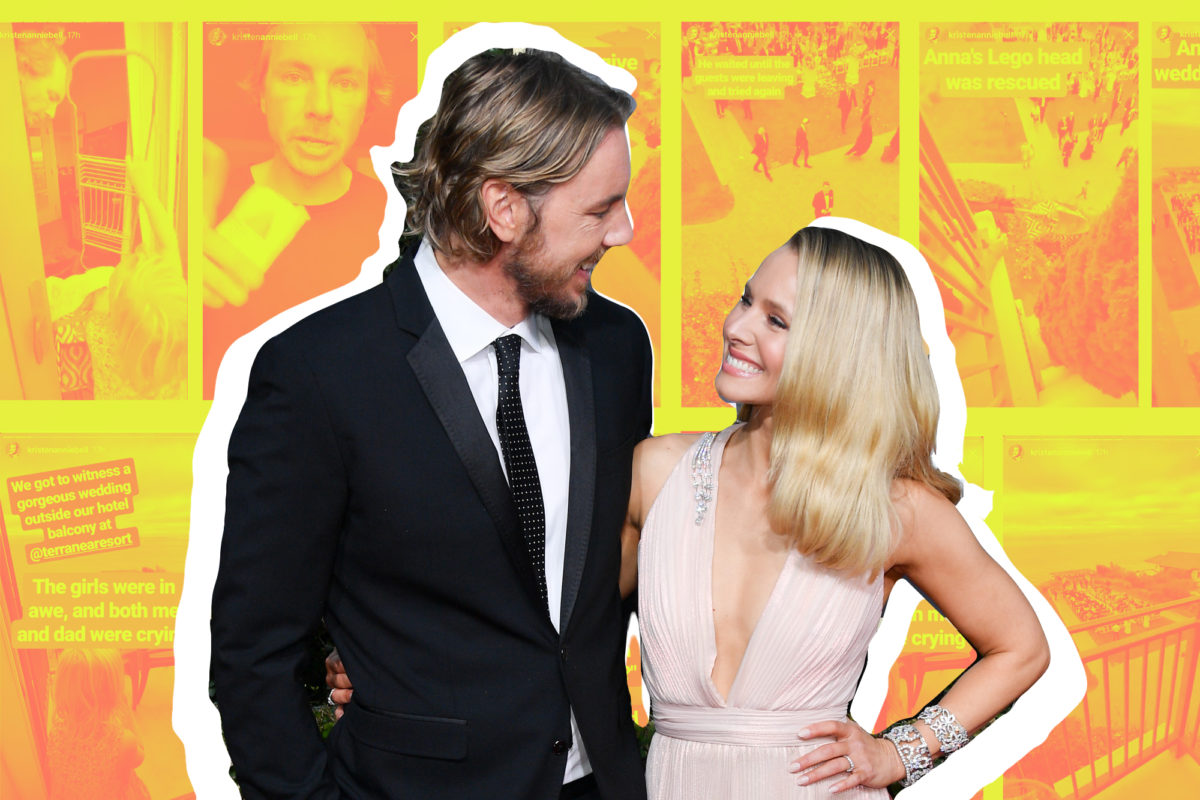 This week, Kristen Bell (of Frozen and Veronica Mars fame) and her husband, actor and podcaster Dax Shepard, were staying at a hotel in California with their two daughters when a toy emergency made them interrupt a Jewish wedding. Yes, really.

Fortunately for us all, the whole entertaining, nail-biter of an event was documented, play-by-play, on Kristen’s Instagram stories (which we then compiled for you on Kveller’s Instagram). Shall we break it down?

The couple and their two girls, 6-year-old Lincoln and 4-year-old Delta, were sitting on their balcony transfixed by the wedding. As they watched, Dax apparently tells Kristen that weddings are the key to world peace. (And he also wondered about taking off his shirt?) In the distance, you can see kippahs on the guests’ heads. It seems that Terranea Resort, a California beachside resort (which was recently mired in a #MeToo controversy, eek) is a fabulous destination for Jewish weddings.

As the family watches on — with the girls in awe and their parents in tears — an undocumented freak accident occurs involving Delta’s well-worn Anna lego doll. (Yes, that’s Anna from Frozen, AKA the character her mother voices, which is pretty funny, but also, so adorable). The Lego princess loses her head (dark stuff!) which goes flying (we can only assume) into a nearby tree.

“I lost Anna’s con-ortion head!” young Delta exclaims at the wedding guests (that’s “Anna’s coronation head,” for those of you who don’t speak toddler).

Dad Dax quickly shifts from waxing philosophical about love, weddings, and shirts, and springs into action. He tries to MacGyver a contraption to save Anna’s coronated head (we assume it comes from this Lego figure). And thankfully, Kristen starts to film the whole ordeal on her Instagram stories. Note: the wedding is still going on in the background!

One of their daughters, perhaps Lincoln (Kristen and Dax do not post their daughter’s faces on social media, so we are not sure), rightfully asks: “Why are you looking for the head right now?”

As the sheva brachot, the traditional seven blessings sang and recited at Jewish weddings, play in the background, we see Dax with a lunch box attached to an umbrella (mad props for the inventive solution!) chowing on some almond butter to beef up for another rescue attempt.

“Delta dropped her little lego head and it went in this tree, and I need to get it,” he tells the camera, his face full of determination.

“The problem is that there’s a wedding going on and my other contraption drew a bit of… drew some attention,” he says, as one of the girls runs by with what seems to be either a metal shopping cart or some kind of bathroom-related contraption (Kristen can be heard saying: “These poor people.”) We can only imagine what the wedding guests thought of a strange man above them clanging this metal instrument into a tree.

As the wedding guests begin to leave the ceremony, Dax sets out on his mission again, umbrella-slash-lunchbox thingamajig in hand. “As you can imagine this is causing quite a stir during the wedding,” Kristen narrates the rescue effort while cheering Dax on with a “Get it, dad, get it.”

Finally, after some very nerve-wracking seconds, Dax manages to fish the Lego head out of the tree. Honestly, we’re impressed he actually got it. As he brings it back to the balcony he triumphantly blesses the departing wedding crowd, some of which have stopped to survey the rescue mission, exclaiming: “Aaaaah, this wedding will have great fortune!”

The crowd cheers! All is well that ends well! Anna’s head has been returned to Kirsten Bell and Dax Shepard’s daughter, and a Jewish couple is newly-wedded. We wish a hearty mazel tov to the happily married couple. And mazel tov to little Delta upon the return of her (fully-assembled) doll!

We can’t help but wonder what it’s like to have your wedding interrupted by the Frozen star (both IRL and in figurine) and her handy husband. If you know anything about the wedding, or attended it yourself, or perhaps, were the lucky husband or bride, please reach out to us here at Kveller with intel.

If you’re curious, you can watch the entire delightful incident below (the “rescue” of the doll begins at 28 seconds in):

Watch what happens when their daughter loses a toy in the midst of a wedding ceremony in California. (Via @kristenanniebell on Instagram)