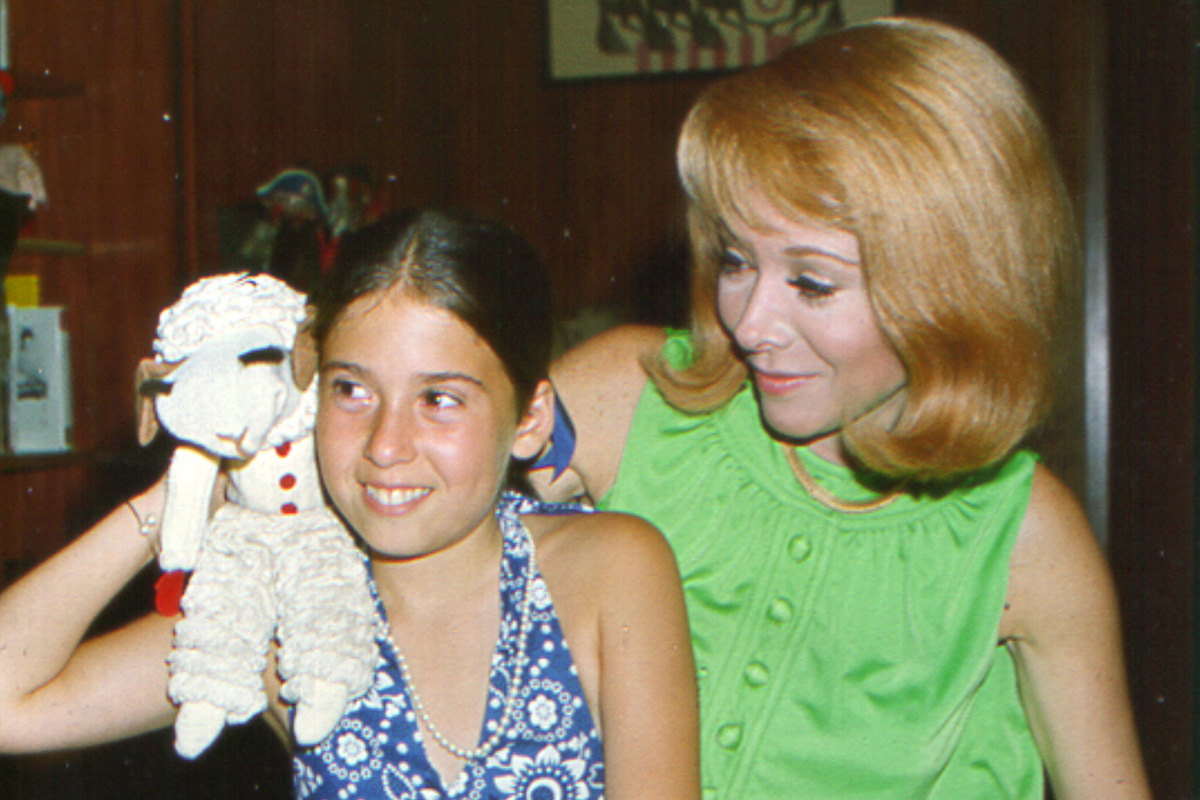 Every once in a while, a perhaps-somewhat-forgotten historical legend finds a strange way to enter the zeitgeist, courtesy of the odd thing that is Twitter. That’s what happened with legendary Jewish ventriloquist Shari Lewis earlier this month, when a tweet by Christopher Fryer went viral.

“Whoa, whoa, whoa… Was there actually a sheep puppet named Lamb Chop in my childhood or was that a f*cked up fever dream?” Fryer tweeted.

The tweet brought about a tidal wave of fond nostalgia about Lewis, who through the original “The Shari Lewis Show” in the ’60s, and her ’90s PBS classic, captured the imagination of entire generations of American children with, yes, her adorable puppet Lamb Chop (and also Hush Puppy and Charlie Horse).

Like all great children’s performers, Lewis’ shows were infused with warmth and reverence for kids — they were equally educational and entertaining. She said performing with children kept her young, and you can see that in every performance, she’s talking to kids at their level.

Shari Lewis was incredible, and fun fact, she was Jewish. She is worth remembering every day of the week, so here are some interesting tidbits to know about the ventriloquist and Jewish mom:

1. Shari was born in New York on January 17, 1936. Her birth name? Phyllis Naomi Hurwitz. Her father was an immigrant from Lithuania.

2. Lewis’ father, Abraham Hurwitz, was one of the founding members of Yeshiva University; for almost 50 years, he taught education at the Jewish university.

3. Abraham Hurwitz was also known as NYC’s “official magician,” a title given to him by Mayor Fiorello La Guardia during the Great Depression. He would perform at schools and hospitals, and, according to his obituary, “began mixing magic with teaching as a guidance counselor at the Brooklyn Hebrew Orphanage.”

In fact, Lewis started her performing career by doing magical acts with Jewish themes that she was taught by her father — such as “one candle multiplying to become eight candles to illustrate Hanukkah and a torn newspaper that, when restored, had the design of a Jewish star,” according to JWA.

4. It was Hurwitz who discovered Lewis’ innate talent for ventriloquism. According to her obituary in the New York Times: “When she was a girl, her father thought he heard a voice coming out of a closet in the Hurwitz’s apartment. When he discovered that his daughter had been able to throw her voice there, he found a former vaudevillian to coach her.”

5. Before she became famous as a ventriloquist, Lewis worked as a singer and dancer on touring productions of musicals like “Bye Bye Birdie” and “Funny Girl.” Here she is performing a jazz number in 1964. I mean, look at those moves:

6. Lewis’ breakthrough was in 1952 when she won first place on Arthur Godfrey’s “Talent Scouts.” After that, she became a TV regular. In 1953, she was hired to host WPIX’s “Kartoon Klub,” which eventually became “Shariland.” In 1960, NBC gave her her first network show, “The Shari Lewis Show.” The show was canceled three years later, which was the beginning of what would be a three-decade-long departure from American TV. Lewis did star in quite a few British shows at that time and even had her own BBC-1 show from 1968 until 1976 titled “The Shari Show.”

7. 1992 marked Lewis’ return to American audiences when PBS hired her to do the “Lamb Chop’s Play-Along!” For five years, the show graced screens stateside and entranced kids with its delightful puppets and diverse cast. “The show stresses the joys of diversity,” she once told the New York Times.

That year, she also won a Parents’ Award for “Don’t Wake Up Mom:”

8. Lewis got her last name from her first husband, Stan Lewis, but it was her second husband, Jewish publisher Jeremy Tatcher, with whom Lewis would spend most of her life. The couple married in 1958 and had a daughter together, Mallory, born in 1962. Thatcher was the brother of Jewish novelist Judith Krantz.

9. Lewis and her husband collaborated on many projects, including a “Star Trek” episode they wrote together called “The Lights of Zetar.”

10. Lewis wrote over 60 books in her lifetime, including “One-Minute Jewish Stories.“

12. And there was a Passover special, too! In “Shari’s Passover surprise,” Lewis and her puppets retell the story of Pesach and have a diverse Passover seder. There are songs, stories and lots of Jewish joy — and a guest appearance from Dom DeLuise.

13. Throughout her career, Lewis won 12 Emmys, a Peabody award and the Dor L’Dor award of B’nai B’rith. That’s honestly just the tip of the iceberg of awards, but they were all so, so well-deserved.

14. We often think of Lamb Chop as kids’ entertainment, but this clip in which the puppet gets drunk and curses is honestly the best thing I’ve seen, possibly ever. Please watch it. It will give you life.

15. Shari Lewis and Lamb Chop once addressed congress! Lewis was invited by Congressman Edward Markey, at the time the chairman of the House telecommunications subcommittee, to speak at an oversight hearing to examine broadcaster compliance with the Children’s Television Act of 1990.

“I have deep convictions, and I know that there is in the human spirit hate and violence and other dark emotions,” she told the crowd. “It is right that we should acknowledge them on TV in responsible ways. We should also acknowledge that in every human spirit there is the desire to learn and laugh and do good and help other people.”

After she finished her speech, Lamb Chop asked Markey: “Mr. Chairman, I would like to know, am I on my own time, or do I get only part of Shari’s?”

“Mr. Chairman, I have been entertaining children for 35 years,” the puppet said after getting her own time in the spotlight. “Which is a long time in the life of a 6-year-old. I would like to say that we really need your help and your care and concern, and we need the best that you grown-ups have to offer. And if you give it to us, we will give the good stuff back. Not only to you, but to our own children as well.”

16. Lewis passed away at age 65 from uterine cancer — she was diagnosed in 1998, and died of viral pneumonia while undergoing chemotherapy that year. She was in the process of working on a new show, “The Charlie Horse Music Pizza,” at the time. The show’s final episode aired on what would’ve been her 66th birthday.

17. Her daughter, Mallory Lewis, is continuing the Lamb Chop legacy, and still performs with the puppet around the world to this day. She calls the puppet her little sister. We’re obsessed:

18. Over on Mallory’s website, Lewis’ daughter recounts that her own son James Abraham Tarcher Hood slept with his Grandma’s Lamb Chop as a child. We couldn’t love that more.

Shari Lewis, your memory will always be a blessing to us!