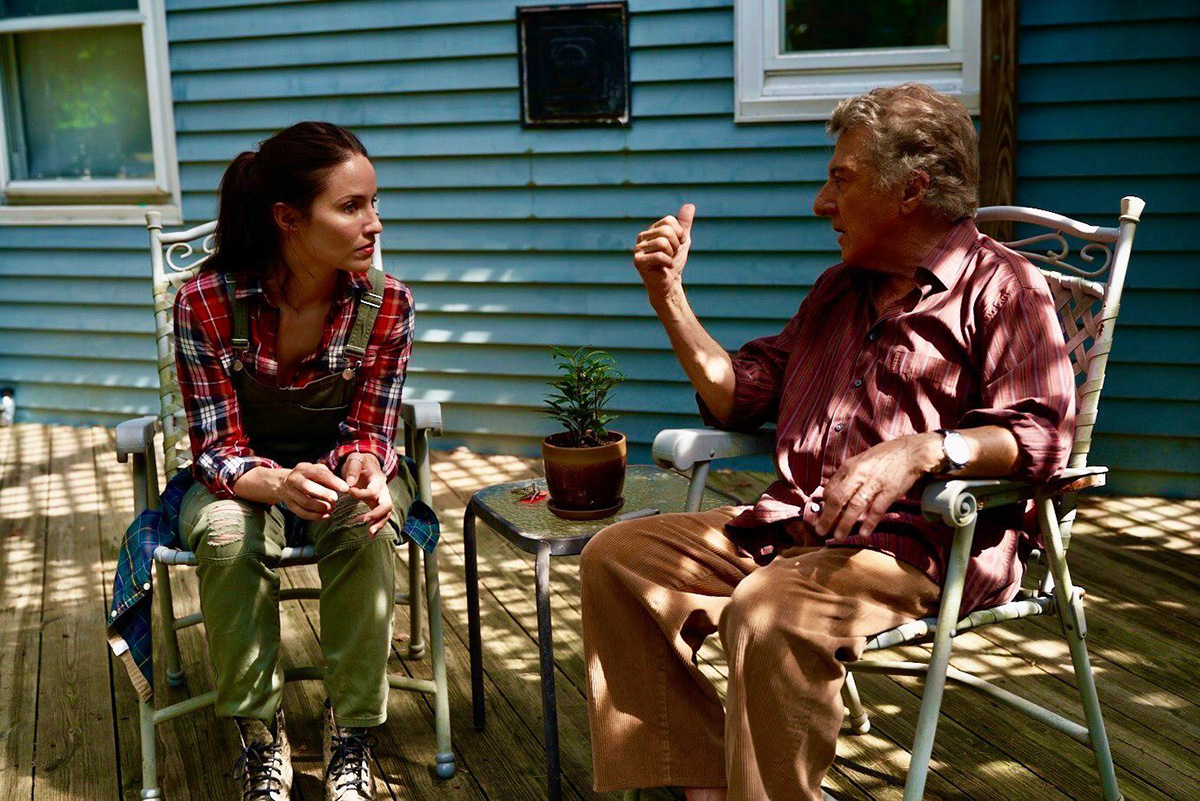 In the home of Abigail, played by Dianna Agron in Mayim Bialik’s directorial debut “As They Made Us,” there are small but meaningful signs of Jewish life. A menorah. A crayon drawing made for Hanukkah hanging on a cabinet. A Jewish star ornament made out of popsicle sticks.

It’s these little details that add warmth and life to her bright and airy home, a clear contrast with the dark house of her childhood — unmoored and full of abuse — that we see in the movie’s flashbacks.

“As They Made Us” follows Abigail, a divorced mom of two, as she tries to care for her Jewish family. Her father Eugene (Dustin Hoffman) is dying. Her mother Barbara (Candice Bergen) is controlling and full of barbs for everyone around her. Her brother Nathan (Simon Helberg) has chosen to disengage himself from the family for years, and does not know that his father is dying. While managing both of her parents, her family, her careless ex-husband, Abigail is also hoping to help her family reunite before Eugene’s death.

The question of the movie — one that is familiar to many parents — is that with all of Abigail’s constant caretaking, who is taking care of her? While the movie sees its heroine on a journey that helps her make the choices to put herself first, we see that the answer to that question is, often, her Jewish faith. Through the chaos and the trauma, moments of Jewish observance help Abigail anchor herself.

Abigail is clearly more observant than her parents — not only is her home full of Jewish mementos, we also get a glimpse of her nightly ritual with her kids, reciting the Shema prayer together every night as they hug their little toy dinosaurs and cover their eyes. She’s also chosen a profession that lets her constantly engage with her faith, as a writer for a magazine called “The Modern Jew.”

Part of Abigail’s journey to self-fulfillment involves getting a cover story for her magazine headlined “Grief: How to let go and let God.” While it’s a cheesy title, it’s also clear that Abigail would not be able to process her grief as healthily without her faith.

One of the most powerful scenes of the movie is Eugene’s funeral. It is, in almost every way, a traditional Jewish funeral. Set in a Jewish cemetery full of graves etched with Hebrew, Eugene is interred in a simple pine box. We don’t see the full funeral service, but we do see the rabbi perform the kriah — the ripping of the clothes, or more traditionally in America, of a ribbon. Abigail chooses to have the rabbi tear her actual top, while her mother asks for the ribbon. As he tells her where the ribbon will be placed — on the right side, as opposed to above the heart for Abigail — it leads to a small confrontation between the mother and daughter:

“I’m in as much grief as she is,” Barbara argues indignantly.

Abigail doesn’t respond. When the rabbi tears her clothes, she takes a deep shaky breath as she further tears the rip.

Nathan, who doesn’t come to the funeral at all, later renounces the whole thing: “Going through some ancient ritual with some bullshit in Aramaic doesn’t matter, Dad wasn’t even that religious.”

The contrast here is clear — for Barbara, Jewish ritual is a source of injustice, a place that does not allow her control. For Nathan, the funeral is a rote tradition that doesn’t hold any meaning. But for Abigail, the ripping is heart-wrenchingly meaningful. Seeing her father’s grave being filled with dirt, as is traditional in a Jewish funeral, allows her to process and feel her grief.

That doesn’t mean that the family doesn’t find other Jewish connections. Abigail sings her father a soulful Yiddish song. Nathan connects with his father over a silly shirt he got him at Yosemite that says  “Yo Semite” (a real shirt you can get, FYI). But Abigail is the only one finding meaning in the more traditional religious practice.

The title of “As They Made Us” comes from a line Abigail yells at Nathan in one particular drunk moment of grief. “I know what you carry, you’re as sick as I am,” she practically spits at him. “You’re as sick as they made us.” That line is so poignant for anyone who survived a childhood with abuse and mental illness, as it epitomizes a constant struggle — that the sum of who we are will always be defined by that suffering.

Jewish prayer reminds us that there is something else that makes us, however. Saying the Shema every night can be a reminder that there are other forces that shape our lives. We can find a way to go beyond the narrative of our parents’ absolute authority on our psyches and being. Now, obviously, that’s no replacement for therapy, but for those that find it meaningful, these daily rituals help us reshape the stories we tell about ourselves.

They may just be words in ancient Hebrew or Aramaic, but as the movie so beautifully shows, they can also be a source of profound comfort and healing.