For Mayim Bialik, Making Her First Feature Film Was a Personal — And Very Jewish — Journey – Kveller
Skip to Content Skip to Footer

For Mayim Bialik, Making Her First Feature Film Was a Personal — And Very Jewish — Journey 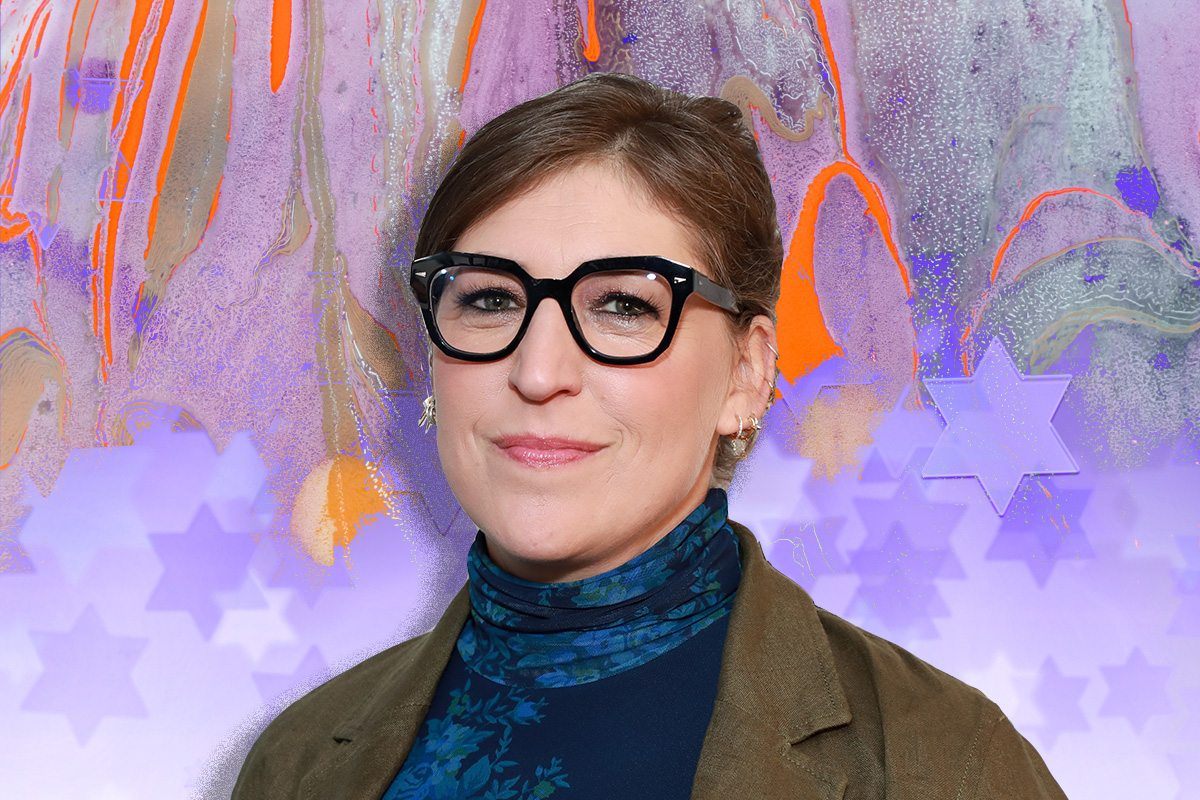 Mayim Bialik’s directorial debut, “As They Made Us,” left me breathless and raw in ways I didn’t expect.

In the film, Abigail, played by Dianna Agron, deals with the gradual loss of her father, Eugene (Dustin Hoffman), from a degenerative disease. Meanwhile she manages her mother, Barbara (Candice Bergen) who has a lack of boundaries and a tendency to sabotage her husband’s care. Abigail tries to reconcile with her estranged brother Nathan (Simon Helberg), attempting to put her family together with her own tired hands before it is too late. All the while, she’s a divorced mom raising two sons, trying to keep her job as a writer for a magazine called “The Modern Jew” and testing the waters of a new relationship.

“As They Made Us,” which is out in theaters and on VOD on April 8, is “not an autobiography, it is not a memoir, but it was inspired by a lot of things that did happen and do happen in a lot of families,” Bialik tells Kveller over the phone.

Indeed, the movie is loosely based on the actress, neuroscientist, “Jeopardy!” host and now filmmaker’s experience with grief. Bialik’s father died two days before Passover in 2015 — she shared about loss, fresh and raw, in these very pages. She has written about mourning her father in Israel, how grappling with the fallibility of memory impacts how she tells her story, and of all those pesky unanswered questions that come after loss.

Bialik wrote “As They Made Us” a year after her father’s passing, as she was riding out the traditional year of reciting Kaddish and following other Jewish mourning rituals. “I was definitely in a heavy place,” Bialik concedes.

Seven years after that loss, what results is a story that is incredibly personal while being universally touching. That weight on Abigail’s shoulders is so distinct, so palpable — and also so relatable.

“It touches people in the places that we often don’t think about,” Bialik says, referring to how we deal with loss, grief and grappling with mental health, especially for those, like Abigail, who feel it’s their role to try to keep their families together.

When I ask what made her feel ready to tell this story, Bialik jokes, “Ask my therapist.”

“Things keep shifting and lifting in grief, and I was at a place where I guess I was ready to think of it as exactly what it was — a written project that, again, was not specifically mine, but had a lot to say,” she muses.

“I approach my story with a lot of humor. I didn’t try and make people cry. That’s wasn’t my goal. I actually have a tremendous amount of distance from it. It doesn’t move me the same way,” she adds.

At the time of her father’s passing, Bialik was working on “The Big Bang Theory,” and knew when writing the script that she wanted castmate Simon Helberg to be a part of it. Once Helberg agreed to do the movie, everything coalesced around it.

For Bialik, stepping behind the camera for the first time “was very scary, very intimidating. A lot of people said ‘many men right out of film school want to direct their first film.’ So I thought, gosh, well, I should just have that kind of confidence.”

Watching the movie, that confidence feels well earned. Despite being a low budget endeavor, it’s masterfully crafted and beautifully shot (Bialik thanks her director of photography David Feeney-Mosier for that). “A lot of my meticulous nature and bossiness seems to have come in handy as a director, because you really do need to be definitive. And you need to have a specific vision and be able to execute it,” Bialik says.

Mayim Bialik surrounded by the cast of “As They Made Us”Most of the actors in the movie are Jewish. There’s Hoffman, who Bialik says “feels very, very, generically [what] people think of [as] a Jewish actor.” As for Agron, Mayim explains, “A lot of people don’t know that she’s Jewish, so I’m also for excited that side of her come out.” And of course there’s Helberg, who played a Jewish character in “The Big Bang Theory.” Even the actors who play Agron’s kids are Jewish — which helped with a scene in which they needed to speak Hebrew. Yet, Bergen, who plays the Jewish matriarch of the family, is not.

“The first thing Candice said to me when we met is, ‘I’m not Jewish.’ And I said, ‘I know,'” Bialik explains. For decades, the joke was that Bialik’s own Jewish mother, who was born in the dawn of World War II, blue-eyed and blonde-haired, didn’t look like any of her Jewish relatives or peers.

“So when I told [my mom] Candice Bergen was playing the role of the mother, she said, ‘Well, that’s perfect, because I always passed [as a non-Jew],'” Bialik remembers.

Still, Bergen wound up bringing her own brand of Yiddishkeit to the film. “The fact is, Candice did grow up among a lot of Jewish families. Much of her Yiddish in the film, actually, I’d say about half is her improvising with words that she just happens to know,” Bialik recounts. “For me, the polarity of their relationship works; I really like her and Dustin together.”

Bergen also earned herself one unexpected fan — Bialik’s 13-year-old son. “My younger son thought that [her] character was hysterical; everything she said he was laughing,” Bialik recounts.

The movie itself is explicitly and profoundly Jewish.

The Jewish characters in the movie show the range in which Judaism plays out in people’s lives, even within one single family. Abigail is more of a traditionally practicing Jew than her parents, saying nightly prayers with her kids. Nathan rejects Jewish ritual, while Eugene and Barbara are culturally Jewish but not observant.

“Some of the notes we got were, ‘Why aren’t her parents religious? Can someone please explain it?'” Bialik recounts. “And like, that’s a whole other movie… that’s a whole other screenplay to write about the conflict of a child who is more observant than her parents. But for telling this story, I hope that it’s sufficient enough to show that [Abigail] makes choices that are significant to her.”

“My mother was raised very religious, Orthodox, and they didn’t speak English in her home. I was raised in this strange mixture of Reform and weird remnants of Orthodoxy that my mom didn’t really talk about as Orthodox. I didn’t know why we had two sets of dishes; whatever she served us on, I ate. But my story was that I did have a more observant kind of derech, path,” Bialik says.

While Eugene and Barbara are less observant, they’re not necessarily less Jewish, Bialik stresses. “That’s the funny and wonderful thing about Jewish identity. You don’t have to believe in God, you don’t have to be an observant person to be part of this people.” 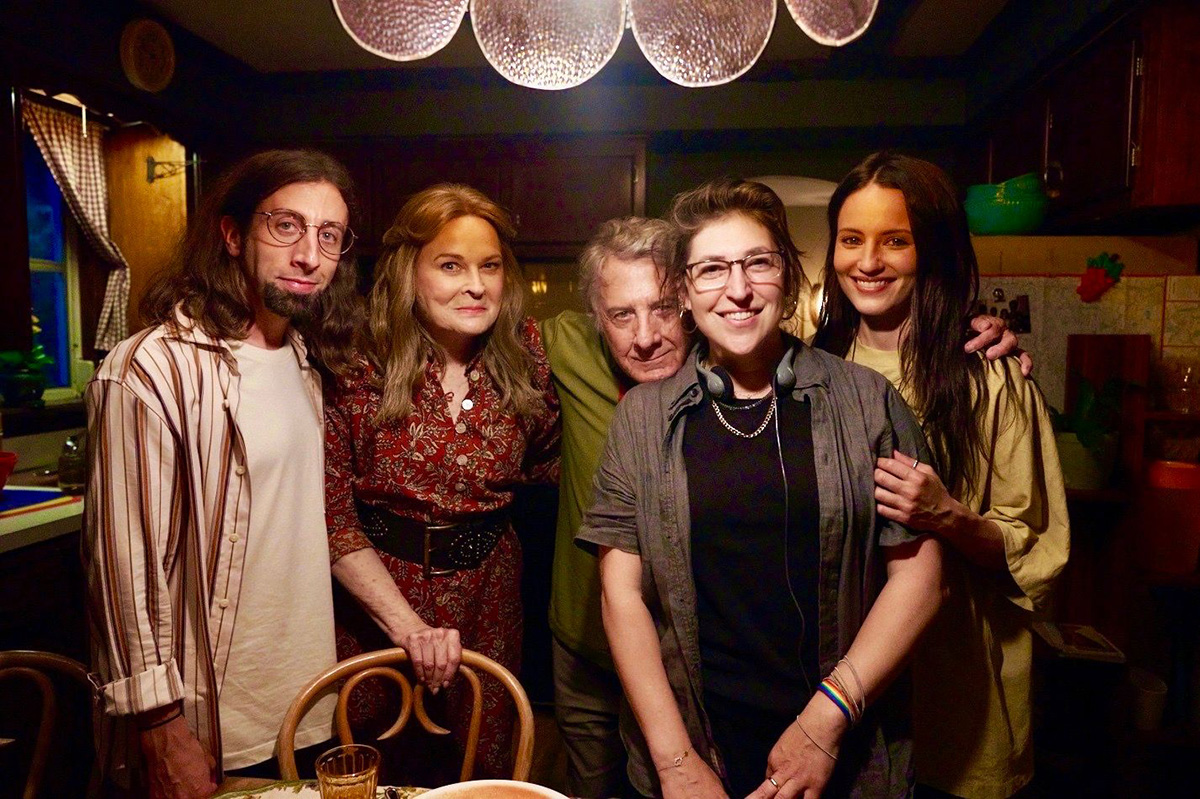 Mayim Bialik surrounded by the cast of “As They Made Us”

One of the most moving moments of the movie features Agron singing a Yiddish song for her father, “Voz Geven Iz Geven Un Nito.” It’s a slow and languid parting from him, and seeing the former “Glee” star sing this meaningful song onscreen is a heartrending experience.

For Bialik, it was a poignant personal choice. “It was one of my grandfather’s favorite Yiddish songs that he would sing to me. And it was one of the lullabies that I’ve been singing to my children.”

“Believe it or not, we had to find the copyright of that song,” Bialik adds. “It’s quite old and the lyrics are ‘what’s in the past is gone.’ You know, when we are young, we are hopeful and life goes so fast, but what is in the past is gone. And you can’t get it back,” she explains. “You know, just a cheerful Yiddish song.”

The movie also features a prominent piece of Jewish liturgy — the Shema prayer — which was another choice particularly meaningful to Bialik.

“There was other Hebrew that that did not survive the cut,” Bialik says, like the entire Viddui, or death confessional. “But my first sentence was the Shema as a child, and it was my children’s first sentence as well.”

“No matter the chaos of life or the day,” Bialik adds, the prayer is “a place of real grounding.”

Like Judaism, parenting serves as another buoy in the chaos of “As They Made Us.” The sweetest, most tender moments of the movie happen when we see the siblings with their children — in parenting, there is a kind of imperfect redemption for the pains of their own childhood.

In real life, Bialik shared the movie with her two sons. “My kids saw the first screening, and they said, ‘Wow, that’s really heavy.'” She adds, “They’re 13 and 16. I don’t generally recommend that people show their 13- and 16-year-olds this film without first seeing it themselves.”

“But obviously, it was more about showing them what mama does. And you know, what took me away from them all summer.”

While Bialik herself does not play a role in the movie, an important part of her can be seen on screen: her Star of David necklace, nestled on Agron’s neck in every scene.

“It’s a very old Magen David. I’ve had it since I was a teenager and the chain broke once so it’s a substitute chain that’s not even real gold. I felt so bad handing it to her. She’s like the fancy actress and here’s my grimy Magen David. But I love that she wanted to wear it.”

Perhaps the most Jewish scene in the film is also the most powerful: Eugene’s funeral, where Jewish rituals are on display. One particularly powerful moment shows the rabbi tearing Abigail’s clothes.

“For me, personally, at my father’s funeral, that was one of the most profound moments. That sound and that feeling was so incredibly powerful and specific,” Bialik recalls. “My knees gave out when I tore and I remember my rabbi said, ‘It’s supposed to feel like that because it’s like your heart is tearing.'”

Watching “As They Made Us,” I felt a similar way. So many times, my heart was tearing, exposing the most intimate, personal pains. I too am a mother of two boys, I too feel overrun by life, I too feel that I am still grappling with what my relationship with my parents has shaped me into, what I can let go of, what I should keep.

It is a rare skill for a creator to be able to gently expose these painful parts of being human in a way that can be so universally touching. Bialik takes your grief in her capable hands — and when you are done watching, you feel seen.