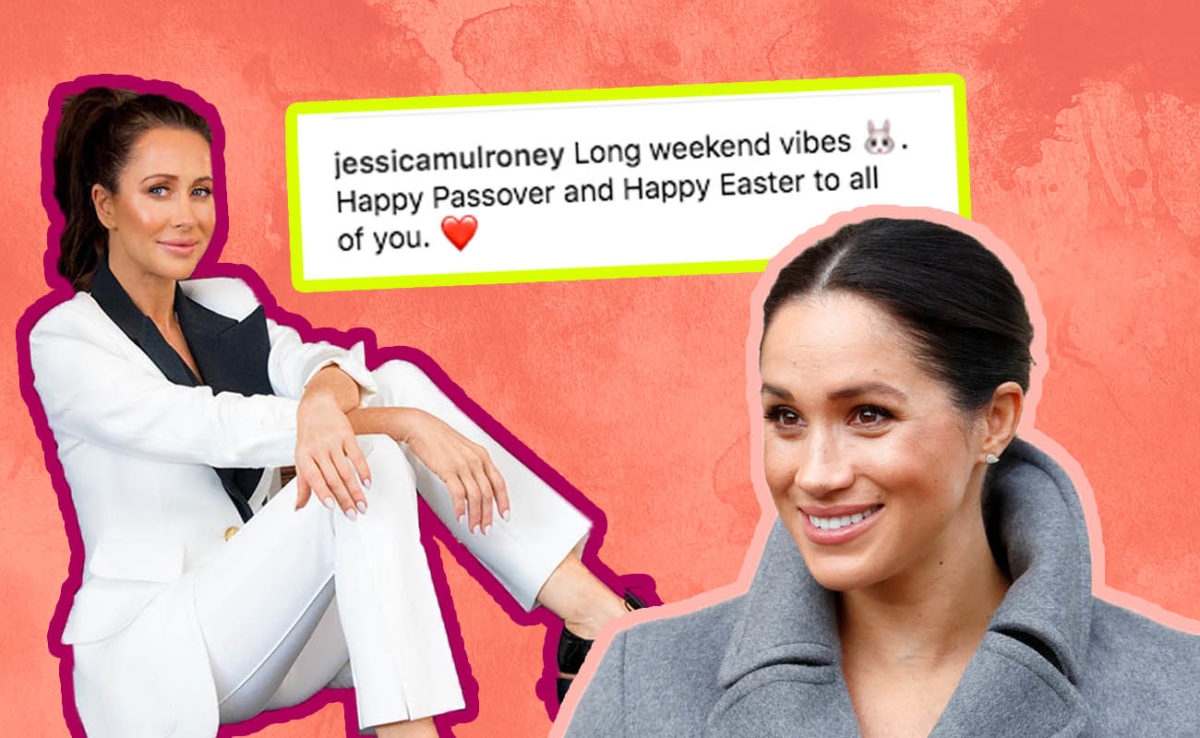 We are back on the Jessica Mulroney beat!

With just about the entire world on Royal Baby Watch, the Jewish mom of three, who’s also Meghan Markle’s BFF, took to Instagram to wish her 300,000 followers a very happy Passover and Easter.

Long weekend vibes 🐰. Happy Passover and Happy Easter to all of you. ❤️

Jessica Mulroney, née Brownstein, was raised in a prominent Montreal Jewish family. (“The Brownstein family is behind the Browns shoe retail empire, founded by Ms. Brownstein’s great uncle Morton Brownstein in 1940,” according to the Globe and Mail.) In 2008, she married Ben Mulroney, son of a former Canadian Prime Minister; a Rabbi officiated their wedding alongside a Catholic official.

Mulroney — who played a key role in the royal wedding last year, and has since been the unofficial stylist of Duchess of Sussex — is widely considered to be the favorite pick for godmother to Prince Harry and Meghan’s first child (due any day now!).

Mulroney is private about her friendship with her royal pal (obvs), but she shares her adorable family life on social media.

“Listen, every person has to have a bit of privacy in their life. There are certain things I hold very dear and secret,” she told Harper’s Bazaar. “There are things I’ll never talk about for sure. My life is an open book, but there’s always a few secret pages in the back that nobody will be able to read.” (When she did post a supportive Instagram story of Markle, she quickly deleted it. If you missed it, don’t worry: We screenshotted for you.)

For example, Mulroney recently shared that her family loves watching The Goldbergs, a sitcom about a Jewish American family in the 1980s.

Here’s our every week night tradition. We watch the Goldbergs together. Because when you travel for work as a mom, all you want are these moments.

Mulroney also shares posts about her Jewish identity, sharing a message on Holocaust remembrance day, writing “Must we never allow silence, hatred or ignorance to betray innocent people ever again.” She is also an expert at responding to anti-Semitic comments.

Another fun fact: Jessica’s sister, Liz, lives in Jerusalem, Israel, with her equally adorable family. (Her Instagram is full of super-cute shots from Israel.)

Happy Passover to the Mulroney and Brownstein fam!