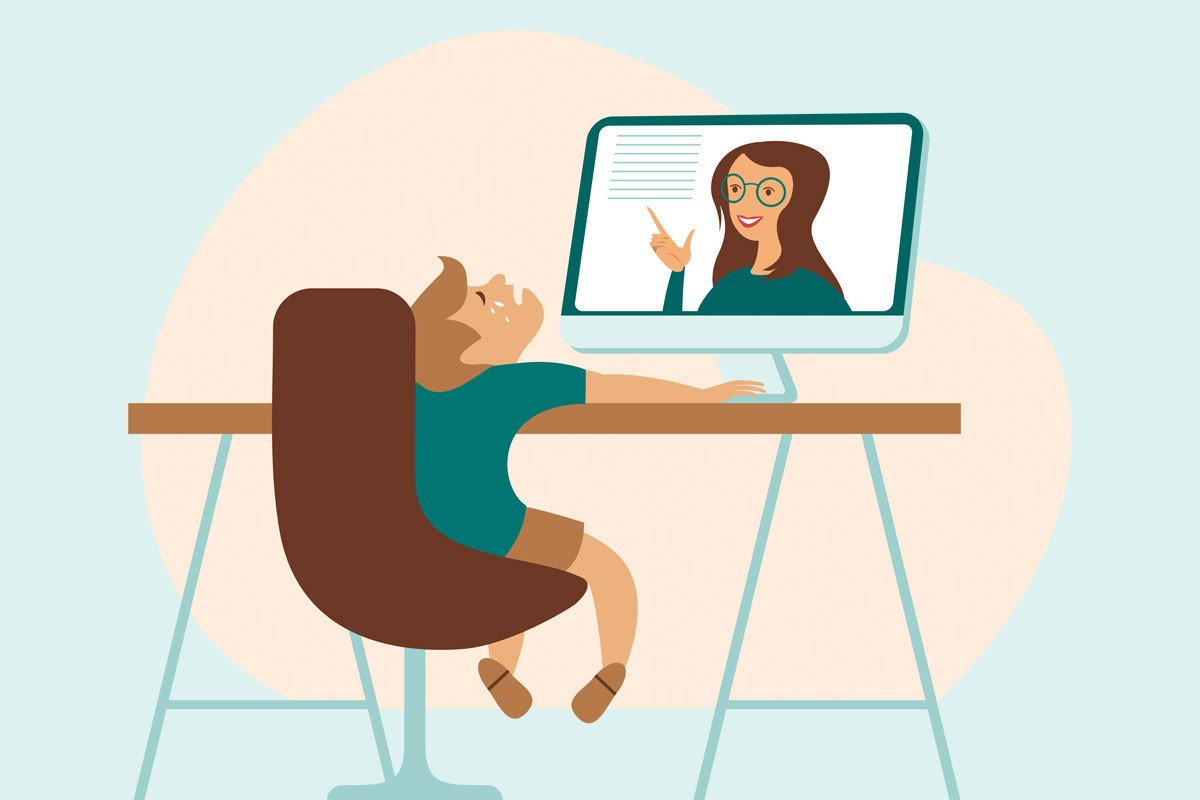 Every school day during lockdown, my 6-year-old daughter Esther has had a meltdown at exactly 1:30 p.m. Daddy scrambles to mute his mic for his class. I apologize to my meeting. Her unvaccinated 3-year-old brother we’re rather desperately trying to keep out of daycare takes advantage of his chance to let Robot Fish swim in the toilet. Chaos overwhelms the confines of Esther’s small body and floods our home.

She is too hysterical to explain to me what has happened but as she quiets, I can hear the high-pitched digital voices of her classmates. “I’m grateful for the cottage.” “I’m grateful for my pet bunny.” “I’m going to Costa Rica.”

I look into the red, wet face of the kid whose will has always filled me with awe, the preemie baby in the NICU who grabbed onto life and wouldn’t let go, who has been known to go into similar meltdowns for slights such as “You cleaned the bathroom without me!” She’s my little FOMO tornado, and I understand.

The question her teacher asks every day — “What are you grateful for?” — is not much different than the dreaded (by most), “What did you do on your vacation?” I regret putting her in the posher alternative school instead of our working-class neighborhood school where no one has a cottage.

Jealousy is a dangerous thing and as my dynamo is learning, it’s the enemy of hakarat ha’tov: recognizing the good. As any kid with a sibling knows, nothing you have is any good, tov, when your sibling has something that might just be better. Gratitude is a life-long goal for many of us. But gratitude feels like some awfully heavy lifting when your 6-year-old world has collapsed into the confines of four walls and small screens.

And let’s face it, most of the time it’s people with much to be grateful for — that they don’t want to share — demanding “be grateful for what you have” of people who have considerably less. Our employers claim to be very concerned about our mental well-being when it comes to fostering a practice of gratitude, but are far less interested in other mindfulness strategies and Jewish values, like learning from everyone (lomed m’kol adam) or being generous (nedivut).

I think about how draining it is at work to always smile and answer every “how are you?” with “great!” Learning shouldn’t have to be emotional child labor. I want our home to have room even for big and unpleasant feelings. Early in the pandemic, during the first lockdown, I had to remind myself that lockdown was also going on outside our home. It wasn’t like when I was poor, when fun things were happening but I couldn’t afford to join in. There was some consolation that we were all in the same boat, that nothing was happening that we were missing out on. But now it’s clear that while we might all be in the same boat, some are on the pool deck and others are in steerage.

I want Esther to know it’s OK to take time to look back and mourn what we no longer have. Briefly, Esther’s little brother Wilfred was a twin. When they told me during an ultrasound that Twin B had died, I choked up and asked to see it, but the doctor scowled, saying, “But Twin A is healthy!” There’s no way the love and gratitude we have for Wilfred’s life would have been diminished by allowing me a minute to mourn the loss of his twin. Maybe gratitude for the present opens to full blossom when there’s also room to mourn the past and hope for the future.

I write to her teacher, explaining that while we appreciate the mindfulness practice of gratitude, we’re going to skip this part of the daily lesson for now. In private, at the Shabbat table, Esther happily lists what was sweet this week over her cup of grape juice: the sunny day we went sledding, finally mastering the round-off and the C Major scale. The teacher writes back that these feelings are normal, but she hasn’t noticed Esther being upset, which doesn’t do anything to assure me.

But Esther herself has come up with another, just as Jewish, mindfulness practice we take up instead. Last year, a small, nondescript building was being constructed in our neighborhood and Esther asked me what I thought it was going to be.

“A bunny spa — and there are cotton candy machines and hot tubs,” I answered, a silly dad joke I expected would get a groan.

But instead, her face lit up. “You mean, a spa for bunnies?”

“No, it’s run by bunnies, giant talking bunnies who do your nails and give you a warm, furry massage while you drink hot chocolate.” I embellished it for the rest of the way home.

Imagining the bunny spa soon became a tradition: Every day we added new floors with new wonders. We preserved them in a Dream Worlds Journal with pictures and descriptions of every wonderful floor. We left the teacher’s Gratitude Journal empty for now.

There’s a time for gratitude, hakarat ha’tov, and being content, sameach b’checlko. But we are also a people who dream: Jews have always known the sustaining power of a good dream. We are also a people who look around at our world and see how it can be better, even beyond the scopes of our talking-bunny-filled imaginations.