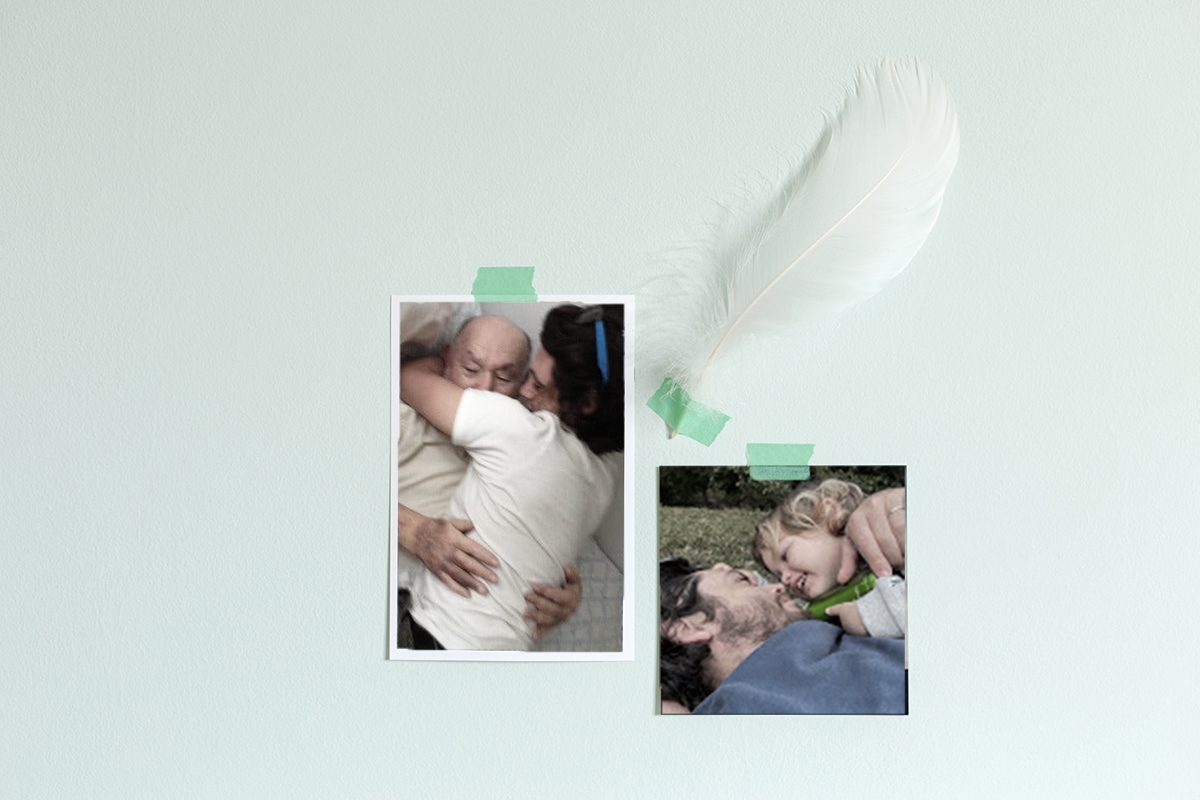 The picture shows a father and a son, laying on grass, in love and content. It’s a close-up. The father has that scruffy Brooklyn look; he is in profile, nose-to-nose to his 2-year-old son. The father is peering intently at the little boy, a grin on his face. The boy is less subtle, and cannot contain his enthusiasm. His mouth is open and smiling, his eyes dance as he draws in his father’s stare. His father’s arm is wrapped around the back of his neck, and the boy’s little hand brushes up against both his bottle and his father’s sweatshirt. The photo is Instagram-ready: no filters needed, no caption required. It captures the sweet power of parenthood: each side basking in the essence of the other.

The man is my son, Micah. The son is my grandson, Irving. The picture was taken by my daughter-in-law, Lauren.

The picture hearkened back, at least for me, to another picture, eight years earlier. It was one that I printed from my phone and kept on my desk. It showed Micah and my late father, embracing on my dad’s bed in the Florida nursing home where he spent his final years. My father’s hands are holding Micah’s waist, as if they are dancing. Micah’s arms are wrapped around his grandfather’s head; his leg is wrapped around his torso. Micah is hugging him for dear life, as if he knows he won’t have too many more of these. You can’t see either of their mouths, but you can tell from their eyes that they are smiling, relishing the moment.

My father’s name was Irving.

My son and my father had a mystical connection. They could be angry with each other, disappointed with each other, and moments later, be in a deep discussion on the War in the Pacific (Irving was a Marine), women and whether God existed.

Only Micah could bear to hear Irving’s much-repeated stories and never lose patience. Later, as dementia set in and mostly silenced that once voluble Marine, only Micah could interpret Irving’s grunts, the look on his face, and know, intuitively, what would make him happy.

When Micah turned 30, despite the dementia, Irving was able to rouse himself for a birthday message to his beloved grandson. The video shows a diminished man, clenching his fist as if summoning words from his soul, speaking of “nachas,” Yiddish for happiness and pride in one’s children:

“Happy, happy, happy LIFE! You’ve given a lot of NACHAS for you, and your family, and me and Grandma, and this is more than anything else in the world. And I want you to know that this NACHAS is every day with us. It stays with us. It can’t go away. And if you have the NACHAS in your heart … you have a heart … then you know that life is worth living.”

Irving passed away in 2014. At his funeral, Micah told the crowd that his grandfather “was cocky yet incredibly humble, supremely confident in his own way but holding profound respect for the world’s mysteries and great minds who helped unravel them.”

Fast forward to the birth of Micah and Lauren’s first child in 2019. The issue of a name inevitably came up.

Micah quietly raised the possibility of Irving with Lauren. Lauren was amazingly open. She never met my father, but she appreciated how meaningful it would be for Micah. At the time of birth, they had settled on either Irving or Lucien. She took her first look at the infant, and said to Micah, “Baby, I think he’s an Irving.”

Back in in the early part of the 20th century, English names like Irving and Milton and Seymour were in vogue, a way for Jewish immigrants to bestow class on their little Americans, an aspirational “we have arrived” announcement. But, as years went by, the name quickly became a stereotype for a certain kind of New York Jew, often of the “nebbish” variety.

Irving is not an easy name for a child in 2021. It was a gutsy move on Micah and Lauren’s part, intuiting that their baby would be bold enough to inhabit that name.

Inhabit it, he has.

I constantly look at my grandson and see my father. Like the original Irving, he is a show boater, able to get laughs out of anyone. He is capable of great kindnesses, but can also be imperious. Perhaps this is more about my father sometimes acting like a 2-year-old.

I have taken to imagining that the soul of my father is somehow animating my grandchild, which can be annoying to those who see my grandchild as the person that he is, the sum total of both parents and their respective genes. There are times when I see “signs” of my conceit: One time, I swear Irving called me “Moishe,” which was my father’s term of endearment for me. After that happened, I asked for another sign. Two days later, I picked up delivery from my favorite deli. When I got home, I discovered that the store had wrongly added pickled herring to my order. Pickled herring! My father’s favorite food, one I abhorred for both the smell and the taste.

I realize how ridiculous all of this sounds even as I write the words.

The key to the two pictures, of course, is Micah: He forged a bond with my father that transcended the cultural and generational divide. When he was a teenager, only Irving could critique his behavior without Micah sulking. The two had a wavelength that you couldn’t break or jam.

It’s the same now with Micah and his Irving: They share a special code, a unique language, a way of communicating that both eggs Irving on, and lets him know when he goes too far.

Only seven years separate the two pictures, but the world is different: There was no COVID in 2014, so nothing dangerous about hugging a loved one in a nursing home, unmasked and unprotected. That fact suffuses the picture with an innocence that makes it even more poignant knowing what we now know.

The 2021 picture is fraught with the reality of the pandemic. Unstated is the idea that Irving — like millions of other children — spent a year-and-a-half at home with just his two parents, something he regarded as normal. The picture implies that sense of security that has bolstered his already sky-high self-confidence. Of course, he is with his daddy, in a park, on a weekday. Isn’t that how it is supposed to be?

As for me, the unseen man-in-the-middle of both photos, the son of the father, and the father of the son, I focus on the eyes, how each image of Micah revels in the presence of each Irving.