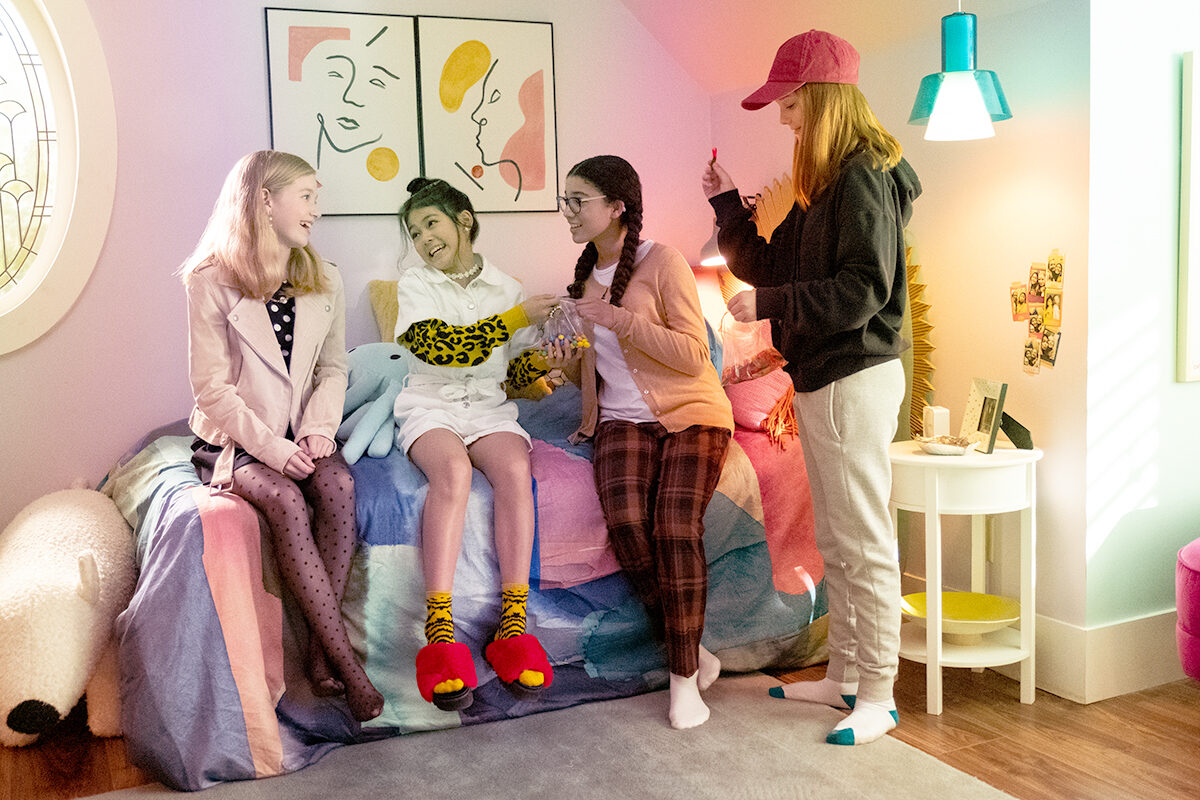 If you grew up in the late ‘80s and/or the ’90s, we have some truly exciting news for you: The Baby-Sitters Club is making an on-screen comeback — landline phone, and all!

The first teaser trailer for the show was just released, and honestly, it looks so promising. The 40-second video is just a shot in of a pre-teen’s bedroom floor, which is littered with gel pens, candy, Kristi’s sports paraphernalia, glitter, juice boxes — and also iPhones and iPads, making it clear that this is not a period piece but a 2020 adaption. (Isn’t it weird to think of a ’90s show as a period piece?! Oy.)

Next the camera focuses on a ringing see-through landline phone. (Just how did the girls procure this item coveted by 90s girls everywhere? We’re excited to find out!). At its helm is the glorious cast — Kristy’s sporting a baseball cap, of course, and Claudia shows off her glorious fashion (that sequin sweater is to die for!).

“Good afternoon, Baby-Sitters Club,” Kristy answers. Seriously, we are drowning in nostalgia, and it feels so good.

The showrunner behind the adaptation is Jewish writer Rachel Shukert, who is also the producer behind one of our favorite shows, the ’80s nostalgia masterpiece GLOW.

Shukert strived to keep the characters hew closely to the books, but with a modern twist. “We’ve loved thinking about each of the characters and translating them into the present,” the Jewish mom told EW. “If you take a kid like Kristy who in the ’80s was this sporty tomboy, who is she in the world now? She’s like this girl boss. Who is Dawn, somebody who was a vegetarian and paved the way for that in the ’80s? Now we’re at this time where she might be somebody with a real social justice bent, an activist about the environment and about income inequality and stuff like that. Just bringing them into modernity was really interesting, thinking about how we could tell these stories through a modern lens.”

“For people my age who grew up with Clueless, she’s such an icon. And there’s something about being like, ‘Kristy’s mom could be my friend,’ [laughs] that makes it feel very in the present day and relatable to all of the generations that have read and loved these books,” executive producer and director Lucia Aniello told EW. “So that was exciting for us when we cast her and saw her on set.”

And while Jewish babysitter club member Abby Stevenson does not appear to be part of the cast this season, we’re hoping Shukert — who grew up as one of 30 kids attending the only Jewish school in Nebraska, and who helped bring some truly meaningful and poignant Jewish moments to GLOW — will infuse some Yiddishkeit to this anticipated new adaptation. (We also hope she knows about the Orthodox Jewish version of The Baby-Sitters Club books, The B.Y. Times!).

Whether or not the new series will be Jew-y, one thing is for sure: The Baby-Sitters Club is going to be a fun multi-generational watch for all. (Plus, Shukert and Aniello promise ’80s and ’90s references, and fun Clueless Easter eggs galore! JOY!)

With quite a few Jewish camps cancelling — and certainly more to come — we are so grateful to have something fun to look forward to this summe.  We can’t wait for The Baby-Sitters Club to be back in business!