17 Jewish Facts About ‘Clueless’ You Need to Know 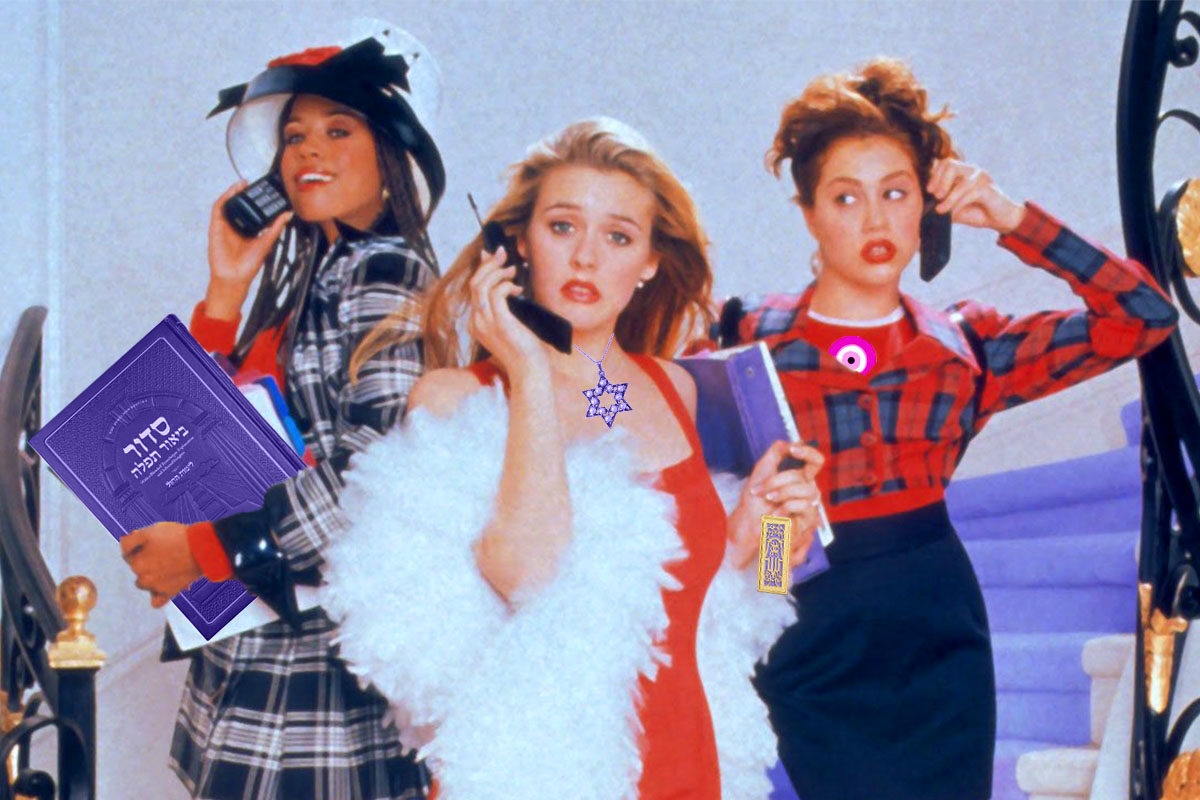 Can you believe this summer will mark 25 years since the fictional Cher Horowitz entered the scene with her yellow plaid blazer? Yeah, we can’t believe it, either.

On its opening weekend back in 1995, Clueless grossed over 10 million bucks, making it one of the most successful films of the year and a cultural touchstone. Loosely based on Jane Austen’s Emma, Jewish writer and director Amy Heckerling’s hit movie gave ’90s teens and tweens a whole new lingo (as if!) and a new perspective on fashion as a form of self expression.

Heckerling’s teen flick centers on kindhearted Beverly Hills babe Cher Horowitz (played by Jewish actress Alicia Silverstone), whose dialect and materialistic attitude became synonymous with the Jewish American Princess (JAP). In Clueless, Horowitz and her BFF Dionne rule the school, and as the most popular students they take it upon themselves to give “tragically unhip” newbie loser Tai a total makeover. Of course, chaos ensues when forbidden love and jealousy challenge the cast of characters.

A cult classic, Clueless has certainly stood the test of time. In fact, in honor of its silver anniversary, Paramount Pictures planned an incredible pop up in Los Angeles, dubbed As If: The 25th Anniversary Clueless Pop-Up — replete with “Cher-able” munchies — as well screenings of the film at more than 700 theaters across the country during the first week of May.

Of course, the pandemic upended these plans. But don’t bug out! We’re still celebrating the movie here at Kveller! Here are Jewish facts you should know about Clueless, the teen flick that’ll never go out of style.

1. Writer and director Amy Heckerling, 65, is Jewish! Duh! Born in the Bronx, Heckerling recalls being raised in an apartment building full of Holocaust survivors.

“My two best friends, their parents were in the camps. My mother, who was born in America, spent a lot of time writing letters for these people for whom English was not their first language. Everywhere you went — the butcher, the baker — everyone had numbers on their arms and everyone kept saying ‘Never forget,’” she told JTA.

Heckerling grew up with a strong Jewish identity, and although her brother had a bar mitzvah, in the 1960s it wasn’t customary for girls to celebrate their bat mitzvah. Though, since she turned 12, a bat mitzvah she was, nonetheless.

2. Star Alicia Silverstone is a Jewish mom to Bear Blue Jack, who she shares with her ex Christopher Jarecki. Up until Clueless, Silverstone was primarily known as “the girl from the Aerosmith videos.”

Silverstone grew up in a traditional Jewish home. “We lit candles Friday night and had seders,” she told Haaretz. “My brother David and I went to Hebrew school and had our bar mitzvahs. I had wonderful memories of my bat mitzvah.”

3. Brace yourselves for this one, and try not to go postal: Heckerling never intended for her protagonist to be Jewish. “I wasn’t thinking in terms of this being a Jewish story,” she told JTA. “I was taking the plot of Jane Austen’s Emma and translating it into that world.”

Heckerling just wrote what she knew. “In my mind, you’re always writing versions of people you know, and to me it felt like I was writing about the daughters of people in show business in L.A.” (OK, given the sheer number of Jews in Hollywood, maybe Cher wasn’t specifically written as Jewish, but she certainly could be!)

4. If Cher isn’t Jewish, then what’s up with her super Jewy surname? It was all improvised. Jewish actor Wallace Shawn, who played Cher’s teacher, improvised the last name “Horowitz” when he took attendance for a scene. The name stuck!

5. Between Clueless and Fast Times at Ridgemont High, Heckerling’s contributions to cinema are countless. The crazy thing is, her parents weren’t initially on board with her creative pursuit. Thankfully, her chutzpah was motivation enough.

“My father thought if I didn’t learn how to type I wasn’t going to be able to get a job,” she said. “My mother wanted to be encouraging, but it seemed very unlikely I’d be successful. It’s just that I wanted it so bad.”

6. In Clueless, Cher gets a happy ending with her former stepbrother, Josh, played by none other than ageless Jewish dad Paul Rudd. As we know, Rudd isn’t a practicing Jew — he’s “perfected it.” (Fun fact: The Jewish actor met his wife, Julie Yaeger, in his publicist’s office just after Clueless wrapped up filming!)

7. Here’s another fun Rudd fact: After filming the movie, the actor’s manager suggested he give gifts to the cast. Naturally, he handed out personalized necklaces to everyone with their names written on a grain of rice. What a mensch!

“[The script] was about this girl that was completely happy, no matter what happened. And I was really getting into that kind of character. But nothing happened with it. They passed on it, they didn’t get it. And a number of things were sort of falling through. I was just getting very frustrated.”

So Heckerling switched agents, and one of them inspired her to shift gears and make Clueless into a feature, because it was “too good for TV.” Then along came Rudin, who signed on. “It became an important film the moment he signed on to produce it,” said his co-producer, Barry Berg.

10. “You’re a virgin who can’t drive!” is one of the most iconic lines from Clueless. (It was recited by Tai, played by the late actress Brittany Murphy, who was married to British Jewish screenwriter Simon Monjack. Monjack died in 2010, just months after his wife.) The line was inspired by none other than Silverstone herself. “Well, that was me! For a very long time,” Silverstone said. “You take the thing that embarrassed you most, and you use it.”

11. Let’s address the borderline incestuous relationship between Cher and her ex-step brother Josh. The romantic relationship didn’t sit well with some, but creator Heckerling would not entertain any mishegas about it, because the “incestuous” relationship was about her Jewish grandparents.

In As If!, author Jen Chaney’s oral history of Clueless, Heckerling explained: “In the Jewish ghetto in the Pale of Settlement in Europe, it was pretty verboten to have a female that was loose. My great-grandmother was a widow with children… In this small little world, a woman that was not in a marriage was going to become destitute and there’d be children [involved]. I mean, I’m not Isaac Singer so I can’t tell you exactly how life went there. But if there was a free-floating female — if your brother died and he had a wife and children — you would marry the woman and take care of the kids. [T]he studio tells you, ooh, this is incestuous, and you’re going ‘This is my grandparents!’”

12. Before Urban Dictionary became the internet destination for slang, Heckerling compiled a list of code words to bring her teenage universe to life. “Any group that wants to separate themselves is going to form a secret language,” she told Interview Magazine, explaining her process of creating the iconic lingo of Clueless.

Adorably, Heckerling used Yiddish to depict a teen relationship as an old Jewish couple: “I thought it would be so cool if the black couple were based on my parents. They fight over nothing. If they’re in a car together, they’re yelling over how to get to some place and I thought it would be funny if they were using Yiddish words.”

13. Where is this Yiddish that we speak of? In the scene after Tai gets dolled up by Cher and Dionne, the former says, “My heart is totally bursting!” To which the latter replies, “I know, I’m kvelling!”

14. There’s a ton of voiceover in Clueless narrated by Silverstone, but before that was recorded, Heckerling filled in. “There are some very wacky versions where there’s this pretty young blonde girl with this depressed Jewish woman in her head,” Heckerling said. “So that’s kinda weird.”

15. Despite being Jewish, Silverstone’s blonde hair threw fans for a loop. Her publicist once said, “Can you believe she’s Jewish? Such shiksa beauty!”

Then again, that golden head of hair was also compared to one very famous Jewess: Marilyn Monroe. Heckerling described her leading lady as a “pretty, sweet blonde, who, in spite of being the American ideal, people still really like.”

16. Heckerling’s daughter was almost in Clueless — just almost. When push came to shove, the Jewish mom had to cut Mollie Israel’s scene as a budding journalist in a skate park. “My daughter was not at all happy with me.” Can you blame her?

17. Speaking of almosts, “fashion victim” character Amber, portrayed by Elisa Donovan, almost went to Jewess Sarah Michelle Gellar! Unfortunately, she couldn’t get out of her All My Children contract. Whateverrr!