On the Feminine Mystique and Not Wanting to Have it All 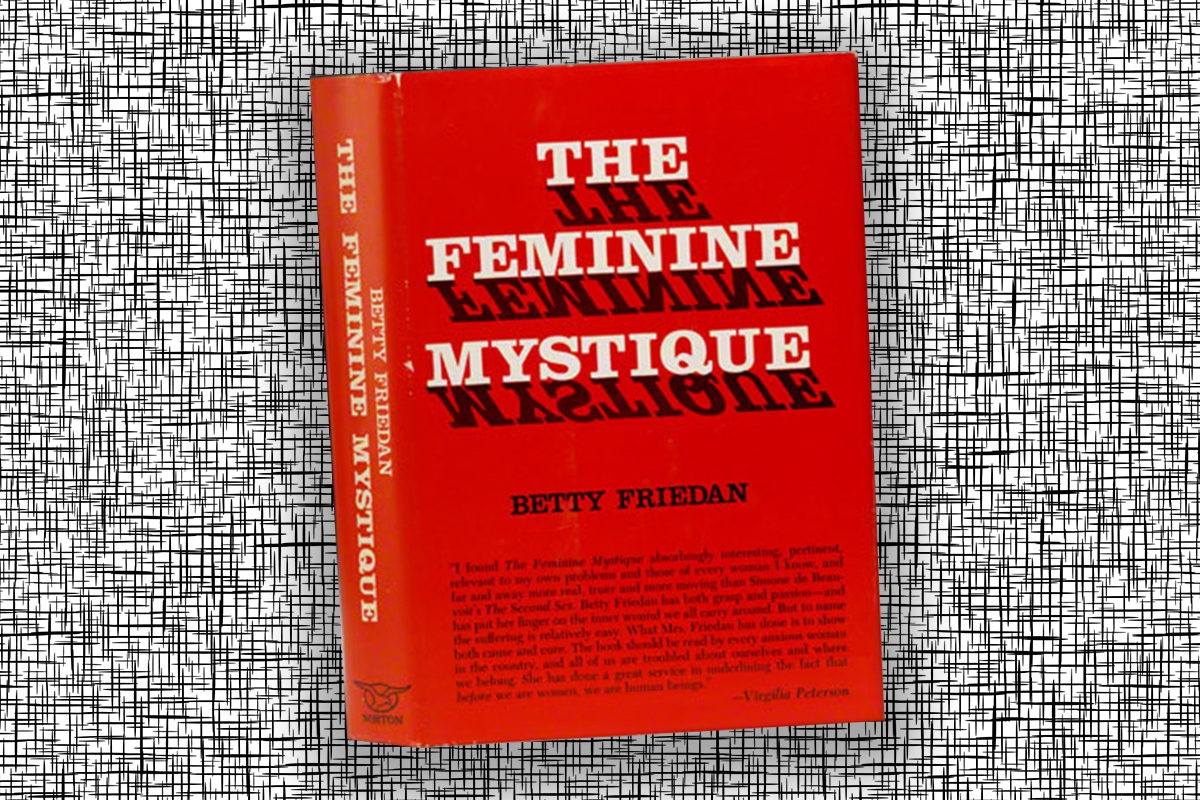 Betty Friedan’s The Feminine Mystique was published in February of 1963. However, excerpts of what would become her celebrated work appeared in Mademoiselle as early as 1962 —exactly 57 years ago.

And though it is such a part of the American culture that I felt I knew what it was about, I didn’t actually read the entire thing — as opposed to references, reviews, analysis, etc. — until last month. It wasn’t at all what I expected.

For one thing, I was surprised to learn that what we now call Helicopter Parenting was a phenomenon described– if not similarly named– by Ms. Friedan as far back as five decades ago. Only her primary concern was for the syndrome’s effect on the mothers.

According to Ms. Friedan’s research (which seems to consist of chats with a handful of OBGYNs):

“The women who have the backaches, the bleeding, the difficult pregnancy and delivery, are the ones who think their purpose in life is to have babies.  Women who have other interests than just being reproductive machines have less trouble having babies.”

As someone who had morning sickness to the point where I lost instead of gained weight in the first trimester(s), cervical bleeding, and hemorrhaging during my last delivery–while employed at a full-time job (I loved) and freelancing to write what would become a NYT best-selling novel, I’m going to go with… no. Don’t buy it. And I am kind of offended by it. Trust me, my life would have been a lot easier if vomiting and bed rest weren’t a part of the equation. (As my then 3-year-old exclaimed in wonder, “Look, Daddy!  Mommy finally came out of her room!”)

I also don’t buy that a lack of fulfilling employment outside of the home infantilizes the mother and leads directly to autism and homosexuality, two additional points Ms. Friedan makes in the book.

While reading The Feminine Mystique from the vantage point of 2012, I kept my blood pressure from boiling over by repeatedly reminding myself that Ms. Friedan was as much a product of her time as any philosopher. Of course she was going to see the popular opinions of the day through her own prism. I was even willing to give her a provisional pass.

But then came the following passage:

“The conditions which destroyed the human identity of so many (concentration camp) prisoners were not the torture and brutality, but conditions similar to those which destroy the identity of the American housewife… When they entered the concentration camp, prisoners were almost traumatically cut off from their past adult interests… They were forced to spend their days in work which produced great fatigue – not because it was physically killing, but because it was monotonous, endless, required no mental concentration, gave no hope of advancement or recognition, was sometimes seamless and was controlled by the needs of others.”

It was boredom that killed six million Jews and hundreds of thousands of others?  Not disease, not starvation, not torture or medical experimentation? In other words, having a hobby at Auschwitz made one immune to the effects of Zyklon B.

(Granted, statistically speaking, those who were put to work did tend to live longer. But, that was because they were deemed useful and kept out of the gas chambers, not because the prisoners found it personally uplifting.)

I was insulted to a lesser degree by the included quotes from Dr. Spock asserting that mothers in the Soviet Union “who have some purpose in their lives besides motherhood… are better mothers… At least they are more sure of themselves. They are not, like American mothers, dependent on the latest word from the experts, the newest childcare fad.”

This, of course, ignores the fact that mothers in the Soviet Union didn’t need a Dr. Spock to advise them (though he was, for the record, translated into Russian, too).  They had the government to tell them precisely how to best raise their children for glorious service to the state. And the threat of prison terms if said conditions were not met. Not a trade-off I’m particularly interested in, says the Soviet immigrant in me.

But finally, the detail that thoroughly pushed me over the edge came in the epilogue added by the author for the 1983 edition.

In it, she praised all the young women she now knew, including her daughter-in-law, who are living their lives the way Ms. Friedan dictated 20 years earlier–a challenging career, a child, an equal romantic partnership, community involvement. She admits they seem a bit worn for it. (“Tinka is getting so thin she looks almost anorexic from the pressures of her demanding agency partnership… and two year old Max.”)

But, Ms. Friedan ultimately decides it doesn’t matter. These women, exhausted or not, genuinely fulfilled or not, happy or not, owe it to society, future generations, sisterhood (and Ms. Friedan herself) to keep plugging along.  They’ll figure out a way to make it all work somehow, she’s sure of it. (Just don’t ask her for details. Yes, it would be nice if these women had grandmothers on hand to help out with the childcare like in generations past, but, Grandma is simply too busy with her own self-realization right now, darling.)

When Renee Septimus wrote here about The Mommy Wars, it made me think of Betty Friedan’s book and the sense that women, having been given permission–for lack of a better word–to work and partner and raise families, were now obligated to do so at full-throttle, simultaneously and publicly and unquestioningly.

If the 1950s brought a fetishization of the stay at home mom, we’ve now swung in the opposite direction: SuperMom or Bust, with the equally rigid parameters seemingly being defined by the very women who were supposed to be on our side.

Reading The Feminine Mystique, I couldn’t help thinking that Ms. Friedan didn’t care if I was tired, or having a hard time keeping all my plates spinning, if I liked my job or was just doing it for the money, if I had to choose between sleep and spending time with my husband at the end of the day. All she cared was that I was living life according to her rules, and that my efforts were duly recorded as a victory for feminism.

I suspect Ms. Friedan would be most disappointed to learn that I quit my full-time job when I was pregnant with my third child because I finally conceded that I couldn’t manage everything and retain my health… or my sanity.

Which means that I don’t have it all.

I don’t want to have it all.

Having it all is too hard.

It kind of makes me want to say: The hell with it.  I’m going to do it my way, not yours.  A sort of personal woman’s liberation.

Fifty years after The Feminine Mystique.