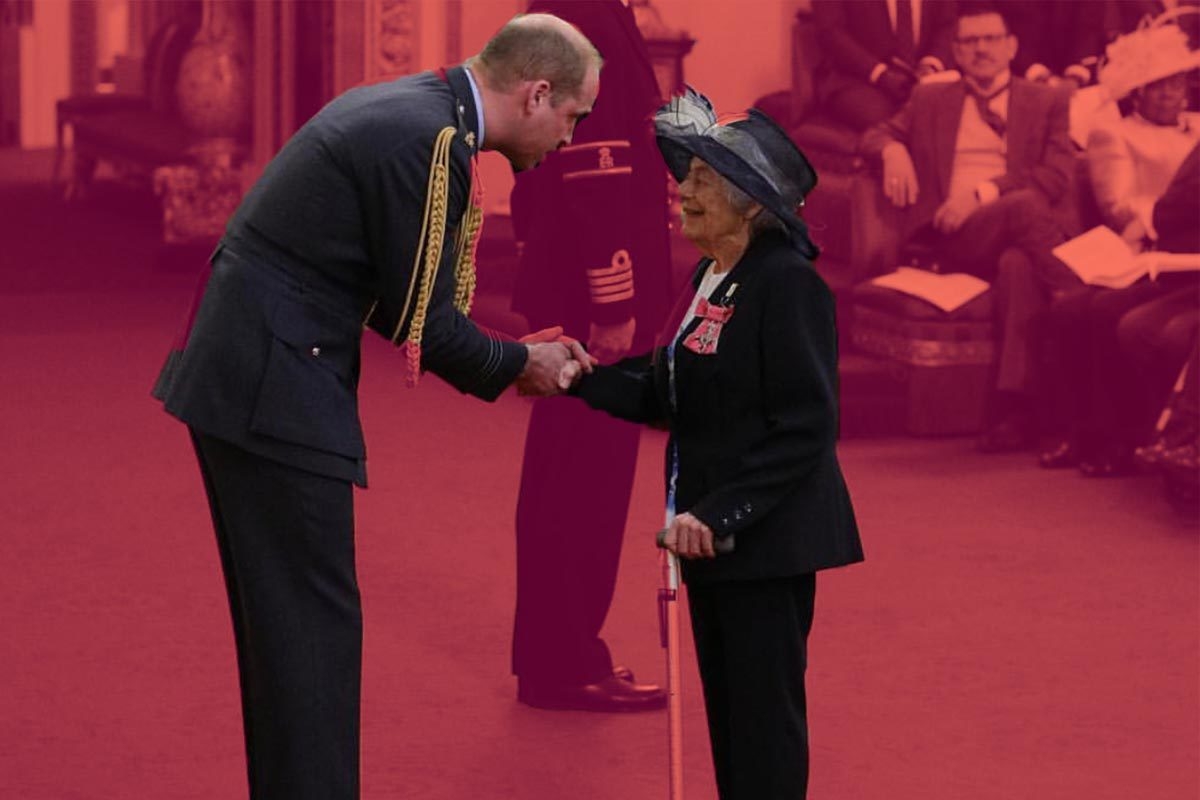 Today at Buckingham Palace, Prince William honored an 89-year-old Holocaust survivor and educator named Vera Schaufeld (née Lowyova) with an MBE for services to Holocaust education. An MBE denotes a Member of the Most Excellent Order of the British Empire, which is a Very Big Deal Indeed.

In May 1939, when she was 9, Vera fled Czechoslovakia on the the Kindertransport, which brought thousands of young Jewish refugees to Great Britain between 1938 and 1940.

“My last sight of my parents was as they stood behind the barrier, waving their handkerchiefs, while I looked at them out of the train window,” Vera recounts to the Holocaust Memorial Day Trust. Her parents were murdered in Treblinka.

After the war ended, Vera moved to Israel to live on a kibbutz. There, she met a man named Avram Schaufeld, a Polish Jew who survived Auschwitz and Buchenwald. Avram and Vera married in 1952; they have two children and four grandchildren. Avram sadly passed away in 2017.

Here’s a portrait of Avram and Vera, taken in their living room:

Avram is holding a photograph of his mother’s family taken in 1913; they were all murdered, with the exception of one uncle. Vera is holding two photographs: one before she was sent on the kindertransport, and another of her parents and grandmother.

Regarding her honor, “I couldn’t have been more surprised,” Vera said. “It’s absolutely amazing to get this honor. My husband was ill for two years before he died in 2017. Before that I did a lot of talks in schools and colleges, but when he died I didn’t work for a long time so I didn’t expect anything like this. It really is amazing — I’m most grateful.”

Vera helped establish the National Holocaust Center — the only center dedicated to Holocaust remembrance and education in the United Kingdom — and worked with the Holocaust Memorial Day Trust to share her story.

Britain’s Jewish News reported that “Vera said she was amazed when William told her he would make sure his children would be aware of what had happened and of the Kindertransport.”

“That was really amazing,” Vera said. “It was really incredible to hear it meant something to him and he knew and he understood.”

Vera Schaufeld first came to England on the Kindertransport in 1939 from Czechoslovakia, and has dedicated her life to teaching adults and children with little or no knowledge of the English language. Vera was involved in the establishment of the @NationalHolocaustCentreUK and has frequently spoken across the UK about her experiences, promoting a message of tolerance and understanding. Today Vera was honoured by The Duke of Cambridge with an MBE for services to Holocaust Education. 📷PA

We’re proud Vera Schaufeld is getting the recognition she deserves.