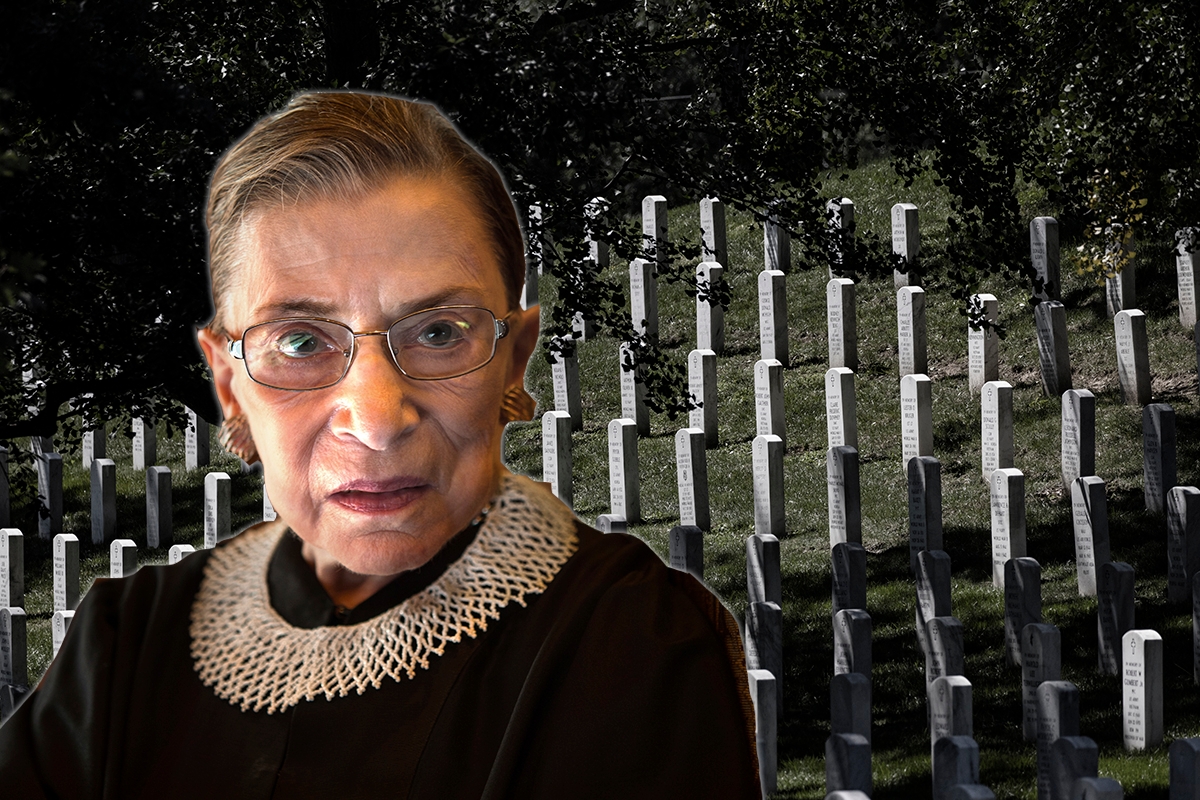 In accordance with Jewish burial tradition — which stipulates that headstones should be unveiled after shiva ends but before a year passes — Supreme Court Justice Ruth Bader Ginsburg‘s tombstone was unveiled on Sunday. Its new inscription, carved in white on black marble, is short and incredibly meaningful.

The tombstone in Arlington National Cemetery, is a joint one — her husband, Martin D. Ginsburg, a lawyer, and U.S. Army Reserve ROTC officer, was interred there in 2010 after he died from cancer. A decade later, Justice Ginsburg, 87 when she died on Sept. 18, 2020, from complications related to pancreatic cancer, joined the love of her life. Frankly, just seeing the Ginsburgs’ names together is beautiful. But it’s also movingly Jewish, with a big Jewish star at its top.

The newly revealed text on the bottom half of the tombstone reads: “Ruth Bader Ginsburg Associate Justice 1993 -2020 United States Supreme Court.” Above it, is a newly engraved seal of the Supreme Court. The inscription not only serves as a reminder of how long her term was — almost three decades — but also of the historical nature of her role: She was the second woman ever to sit on the highest court of the land.

Ginsburg continued to make history in her death: She is the first woman Justice to lie in Arlington Cemetery and the second Jewish Justice in the cemetery (the first was Arthur Goldberg). Ginsburg was also, notably, the first woman and the first Jewish person to have her body lie in repose inside the National Statuary Hall at the U.S. Capitol.

Her inscription on the gravestone is brief in contrast to Marty’s, which has many traditional Jewish elements. His includes the Hebrew letters pay and nun, which signify “here lies.” Marty’s Hebrew name is also there — Moshe David ben Mordechai— and the letters taf, nun, tzadi, beit and hei which stand for, “may his soul be bound in the bundle of life.”

The tombstone goes on to describe Marty as a “caring citizen, advocate, teacher, and family man.” The Justice always said that she was lucky to have a husband who was truly a partner in life: “I had a life partner who thought my work was as important as his, and I think that made all the difference for me.”

Now she lies with her biggest supporter under a meaningful, moving and history-laden tombstone.

Just before her first yahrtzeit, Justice Ruth Bader Ginsburg's gravestone is unveiled (complete with the seal of the Supreme Court above her name). #RBG pic.twitter.com/BKNLHMk8dV

It’s hard to believe how much time has passed since Ginsburg’s death — it’s been a full Jewish year, and on this September 18, it will be 366 days.

The pain we all felt at her death, on the eve of Rosh Hashanah 2020 (5781), is still very much palpable for many of us. So much has changed — we have a new administration, and Covid vaccines are now available across the country. Yet, so much is the same — we’re still living through a pandemic, and the issues that Ginsburg fought for throughout her career are still at stake.

“The decision whether or not to bear a child is central to a woman’s life, to her well-being and dignity,” she once said. “It is a decision she must make for herself. When the government controls that decision for her, she is being treated as less than a full adult human responsible for her own choices.”

With the Supreme Court recently upholding the Texas abortion ban, her absence is very much discernible. The dishonoring of her final wish — to wait on her replacement until a new administration is instated — still feels like a slap to the face.

And yet, her incredible legacy lives on — recently, a beautiful statue of her likeness was erected in downtown Brooklyn, where Ginsburg was born and raised. And now, countless Americans will be able to visit her historic grave, lay stones on it and honor her life and work. And hopefully, they will continue to fight for her legacy, and dissent in the face of injustice.

May her memory be forever a blessing.

7 Fast Facts About Yom Kippur That May Surprise You