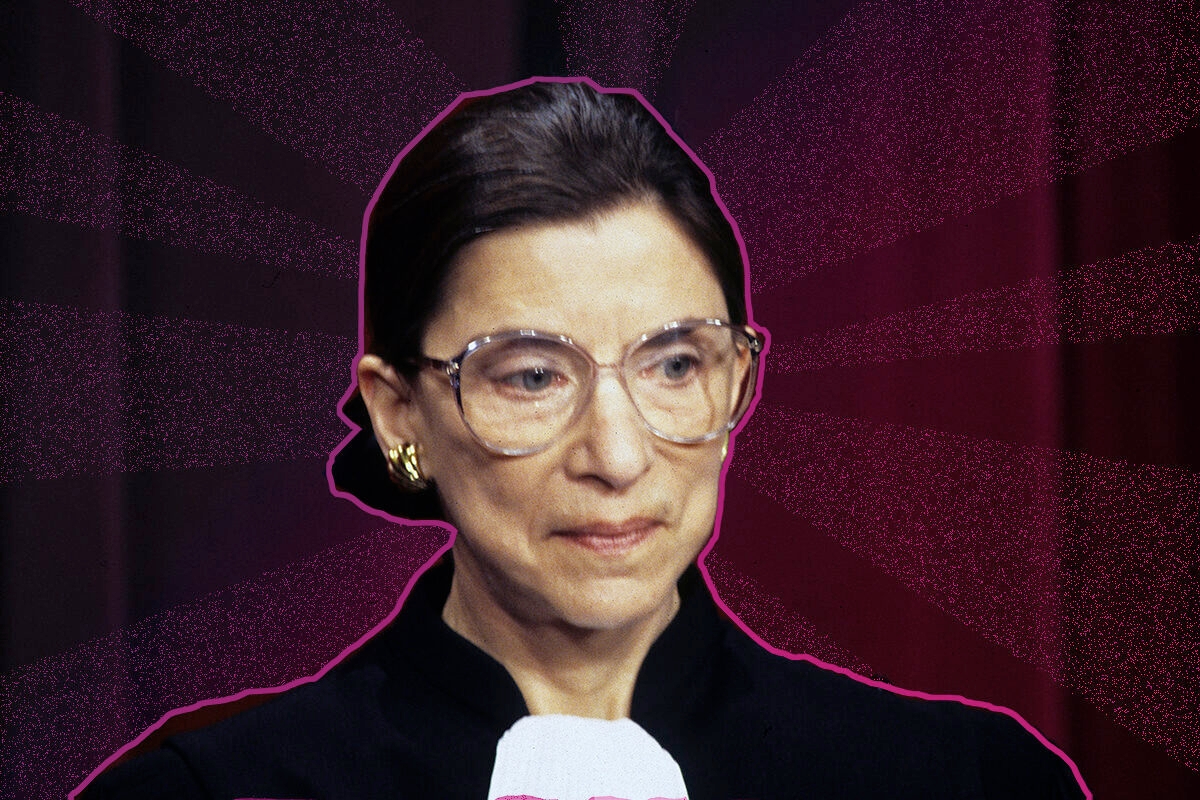 Supreme Court Justice Ruth Bader Ginsburg, who passed away last Friday with the coming of the Jewish New Year, was truly tireless. She worked hard and endlessly in pursuit of justice, until her very last moments.

The loss of Ginsburg is so incalculable and staggering, it’s easy to be paralyzed in its face. At a time of great uncertainty, so many of us pinned our hopes and dreams partly on her, on her ability to hold onto health and life as we try to restore some kind of order to this country. For so long, so many of us drew hope and inspiration from this feminist, Jewish trailblazer. And now, she is gone.

In her office, Ginsburg displayed framed artwork with the famous Deuteronomy line, “Justice, justice, shall you pursue.” And while, in her death, being swept away by a tide of helplessness is understandable, we must also remember the famous line from Pirkei Avot, which states, “You are not obligated to complete the work, but neither are you free to desist from it (2:21).”

And right now, we need to keep on working to preserve and advance the values that RBG fought for. Of course, we should all take time to grieve. But if we truly follow in the example set by this woman, who truly didn’t stop working towards that goal of tzedek — justice — until her last days, we must act.

Here are some ways to honor her memory and legacy with actions:

The traditional Jewish prayer of mourning is a deeply meaningful way to lament the death of a great Jewish tzadeket (that’s a female person of great righteousness). Traditionally, the Kaddish is recited by the immediate family, and only after the person has been buried. But RBG was hardly one to stand on tradition. In fact, Ginsburg said that a 1916 letter from Hadassah founder Henrietta Szold, in which she declined an offer from a man to say the prayer for her mother — saying she would do so instead —  influenced her deeply.

Watch this short video, below, of Rabbi Sari Laufer reading Kaddish and honoring the amazing RBG. You and join along with her:

2. Teach her legacy to your children:

L’dor v’dor — Judaism is all about making connections from generation to generation, and passing on Ruth Bader Ginsburg’s legacy means teaching it to your children.

First of all, if you’re grieving right now, it’s a good chance to have a frank conversation about what RBG meant to you with your kids (in age-appropriate terms, of course). Telling our kids what we care about — even when we’re sad — is perhaps the most poignant way to share our values.

For toddlers, there are adorable board books featuring the Justice, like A Is for Awesome!: 23 Iconic Women Who Changed the World and I Look Up To… Ruth Bader Ginsburg.

You can watch movies about her with your kids, like Julie Cohen and Betsey West’s great 2018 documentary, RBG, streaming on Hulu.

But the most important thing we can do is to show our children her legacy with our actions.

3. Study her legacy yourself:

This is a good chance to read up on RBG, both for inspiration and to give you the drive to go on. Ginsburg was truly, incredibly hardworking and fierce — and reading about her life and her convictions can help sustain and move us forward in this difficult time. And RBG herself believed reading was powerful and important in making dreams come true — so reading seems to be the perfect way to honor her.

"Reading is the key that opens doors to many good things in life. Reading shaped my dreams, and more reading helped me make my dreams come true."

RBG said many important things. This is one I have in my kitchen. Rest in peace & power, Justice. May her memory be for a blessing. pic.twitter.com/MWHeLuwmPB

You can start with books like  Ruth Bader Ginsburg: A Life (read our interview with Ruth’s biographer); My Own Words, written by the Justice herself; Conversations with RBG: Ruth Bader Ginsburg on Life, Love, Liberty, and Law; and of course, Notorious RBG.

4. Fight for her dying wish to be respected:

According to Nina Totenberg, NPR’s legal affairs reporter and a close friend of Ginsburg’s: “Just days before her death, as her strength waned, Ginsburg dictated this statement to her granddaughter Clara Spera: ‘My most fervent wish is that I will not be replaced until a new president is installed.'”

With both President Trump and Senate majority leader Mitch McConnell vying to appoint a replacement for Ginsburg as soon as possible, it’s clear that Republicans — who set the precedent for not appointing new judges so late in an election year with Obama’s appointee, Merrick Garland — are working to make sure Ginsburg’s dying wish does not come true. While many think the fight to stop the nomination and confirmation is unlikely to bear fruit, it also seems that the majority of Americans believe we should wait until after the election to confirm RBG’s replacement.

56-36 the public wants the winner of the November election to pick RBG’s replacement. This is a clear statement. https://t.co/KPbA3JMuVO

So what can we do? Not a whole lot — but even losing battles are worth fighting if they’re righteous. We can call and write to our senators and ask them not to vote to confirm a SCOTUS candidate until after the inauguration, and ask anyone who agrees with you to do the same. This bot makes it almost stupidly easy:

This is a Resistbot that will automatically text your senators. It walks you through the process and shows you the letter and asks for your approval to send. #vote #vote2020 #election #riseupshowupunite #democracy #rbg #scotus @civilrightsorg @riseupshowupunite @vote411 @rockthevote @votedotorg

And of course, if all else fails…

5. VOTE — and encourage others to do so:

We know why RBG hoped to stall her replacement until after the election. Even if her dream does not come true, we should still vote for a better outcome, and a better, more just country. Of course, voting is important — but making sure all those around you are exercising their democratic right is just as important. Volunteer your time to help people register to vote and donate to get out the vote.

6. Give to causes that mattered to RBG:

CNN has a great list of organizations that support causes Ruth cared for, organizations like the Washington Concert Opera, which she loved. If you’re looking for Jewish organizations to donate to, you can also give to Hadassah, which RBG was a lifelong member of, or to HIAS, which supports refugees, like RBG’s own father.

You can give money to the ACLU, where RBG worked from 1972 to 1980 (when she was appointed to the bench as a judge), and where she headed and co-founded the Women’s Rights Project.

And of course, you can make a donation to any organization that supports women’s rights and women’s health, including abortion rights —  all things RBG was a big proponent of.

Giving money to advance causes is one thing you can do, and do regularly if you can afford it. But it’s not the only way to make this world a better place. Just like RBG used her intelligence and her gift for the law for tikkun olam, we should be inspired to use our skills — be they art, PR, tech skills, or whatever — to advance the causes we care about. And, whenever possible, let’s involve our children.

8. Don’t lionize her — improve upon her work:

Yes RBG was a hero, but she was not perfect. In the days since her death, many have criticized some of her past actions and her past statements, like her statement on Colin Kaepernick or her ruling against the Native American sovereignty in this 2005 case.

Celebrating the legacy of RBG is paramount — but so is not making her into an infallible icon. In life and in her death, we should also remember that Ginsburg was a human, and like all of us, imperfect.

So make sure you don’t make her the only feminist icon you and your children look up to. Fill your house with diverse books, teach them about other contemporary politicians and activists.

Light a Yahrzeit or a Yizkor candle for RBG. The memorial candle, which traditionally burns for 24 hours, is usually lit for loved ones on the sundown of the Hebrew anniversary of their death, and on four Jewish holidays: Yom Kippur, Shemini Atzeret, Passover, and Shavuot. Set a reminder to light it on those dates — or start a new tradition. You can, for example, light a candle for her on the anniversary of her Supreme Court confirmation, on the 16th of Av.

It’s a good way to remember to honor her legacy as the years go by — and to keep her fight for as long as possible.

RBG was a master dissenter — even before her law school days. She spoke up against injustice whenever she was faced with it. It’s easy, at times, to let wrongdoings, big or small, to just slide. But RBG has shown us in her long and accomplished life, is that speaking up and voicing our disagreement is what truly makes a change in the world. It’s an important lesson for us and for our children.

May her memory be for a blessing.