The Amazing Jewish Story Behind ‘Over the Rainbow’ 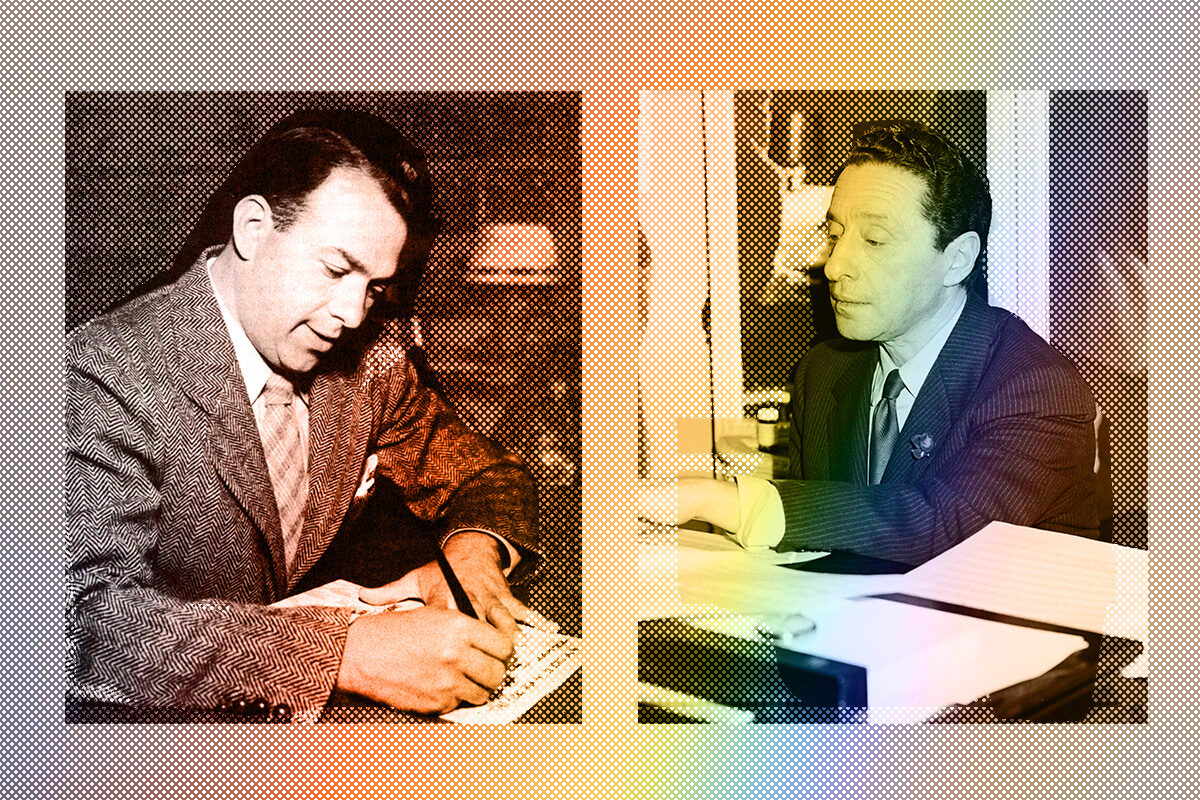 “Saturday Night Seder” was an amazing testament to the beauty and power of American Jewry. Over the span of just two weeks, Benj Pasek (Dear Evan Hansen), Alex Edelman and a group of incredible Jewish (and non-Jewish) stars (including Andy Cohen andFran Drescher,to name but a few) created an amazing Jewish show based upon the ritual Passover meal. Filmed entirely while social distancing, the variety performance raised more than $2 million dollars for the CDC Foundation

The entire show was a delight, but one segment really stood out as an emblem to the power and resiliency of American Jews: Ben Platt’s and Judith Light’s performance “Over the Rainbow,” a  song written by two sons of Jewish European immigrants for a movie that came out just two months after Kristallnacht.

Platt’s rendition of the song is magnificent —  the Dear Evan Hansen star brings a powerhouse performance to every song he sings — but this one is particularly inspired. As he sings, Light, his co-star on The Politician, tells the story of Edgar Yipsel “Yip” Harburg, who was born Isidore Hochberg, and Harold Arlen, born Chaim Arluck — the sons of Jewish immigrants from Europe who escaped the pogroms of Eastern Europe to “a land they only imagined in their dreams.”

Yip’s parents were Russian Jews and Harold’s father was a Lithuanian cantor. Yip became a famed lyricist and Arlen a celebrated composer, and the two together wrote: “Over the Rainbow” for The Wizard of Oz, which came out New Year’s day 1939, less than two months after Kristallnacht, the terrible and vicious Nazi night of looting and destruction of Jewish businesses and synagogues in Germany in November of 1938.

“Hear the lyrics in this context and suddenly, the lyrics are no longer about wizards and Oz but about Jewish survival,” Light told the viewers of Saturday Night Seder as Platt belted out the moving song.

I cried as I watched it, and I bet that if you watched it, you got teary-eyed as well. Heck, head writer Alex Edelman cried all through making this bit, from reading the songwriters’ story to listening to Platt’s vocals.

Light ends the bit by saying that “throughout his career, lyricist Harburg continued to write about justice and liberation, not for just Jews, but for all oppressed people.”

Their songwriting was beautiful, yes, but also urgently political. In the words of composer Arlen, “Music doesn’t argue, discuss or quarrel, it simply breathes the air of freedom.”

The bit is a perfect distillation of the iconic song, and it works perfectly in the context of Passover — a holiday that commemorates the fight for freedom, after all.  “Writing Judith’s monologues took several days and lots of loving argument with Pasek and [composser, lyricist and writer Mark] Sonnenblick [who also worked on the show] over the perfect amount to say,” Edelman wrote on Twitter. “Inspiration for it was sourced from several accounts and ruminations on the song’s creation.”

It’s easy to understand why creating this bit was a challenge — the biographies of the songwriters are just so rich. Harburg grew up in New York’s Lower East Side. The youngest of two sons, the family was poor but happy and they all worked for a garment factory. After Harburg’s brother died from cancer, his mother became agnostic, and Yip, in turn, also abandoned his religion, but the Jewish value of tikkun olam was always imbued in his work.

As Light mentioned, Harburg wrote about the oppressed, and many of his songs were about social consciousness and justice. One of his most well-known songs “Brother, Can You Spare a Dime?” which became the anthem of the Great Depression and was sang by the likes of Bing Crosby and Tom Waits. This incredible song is ever so relevant as we are about to face yet another great financial crisis. Harburg was blacklisted during the McCarthy era. “This was just the blackest, the darkest moment of this beautiful country,” Harburg, who died in 1981, once said in an interview.

Unlike Harburg, Arlen was a deeply religious man, whose father was a cantor. He grew up singing at his father’s synagogue in Buffalo, and that experience marked him and made him the musician that he was.

“Pop had a perfect genius for finding new melodic twists,” he told the New Yorker in 1955.

When he was born his twin died, and so he was given the name “Chayim,” meaning “life.”  When he changed his name, his parents refused to acknowledge him. Yet despite being a deeply melancholy man, Arlen also composed one of the most uplifting songs ever: “Get Happy,” which he wrote for Judy Garland.

As it happens, there’s a third son of Jewish immigrants who was involved with the writing of “Over the Rainbow:” lyricist Ira Gershwin.  Born to Russian Jewish immigrants, Gershwin helped workshop the melody, and created one of the most memorable parts of the song: the ending: “When Gershwin heard Harburg’s lyrics, he cried. He didn’t, however, think the song ended properly, and he improvised a coda: ‘If happy little bluebirds fly / Beyond the rainbow / Why oh why can’t I?'”

The story behind this iconic song — a song that I am guilty of dismissing as cheesy and overplayed (never again!) — is truly awe-inspiring. For “Somewhere Over the Rainbow” to exist, many Jewish men and women had to flee Europe into a land where dreams really do come true.

We are so grateful for them, and for the creators of “Saturday Night Seder” who reminded us of their greatness, and whose talent helped raise millions of dollars. May we all dare to dream dreams of justice and equality and freedom.