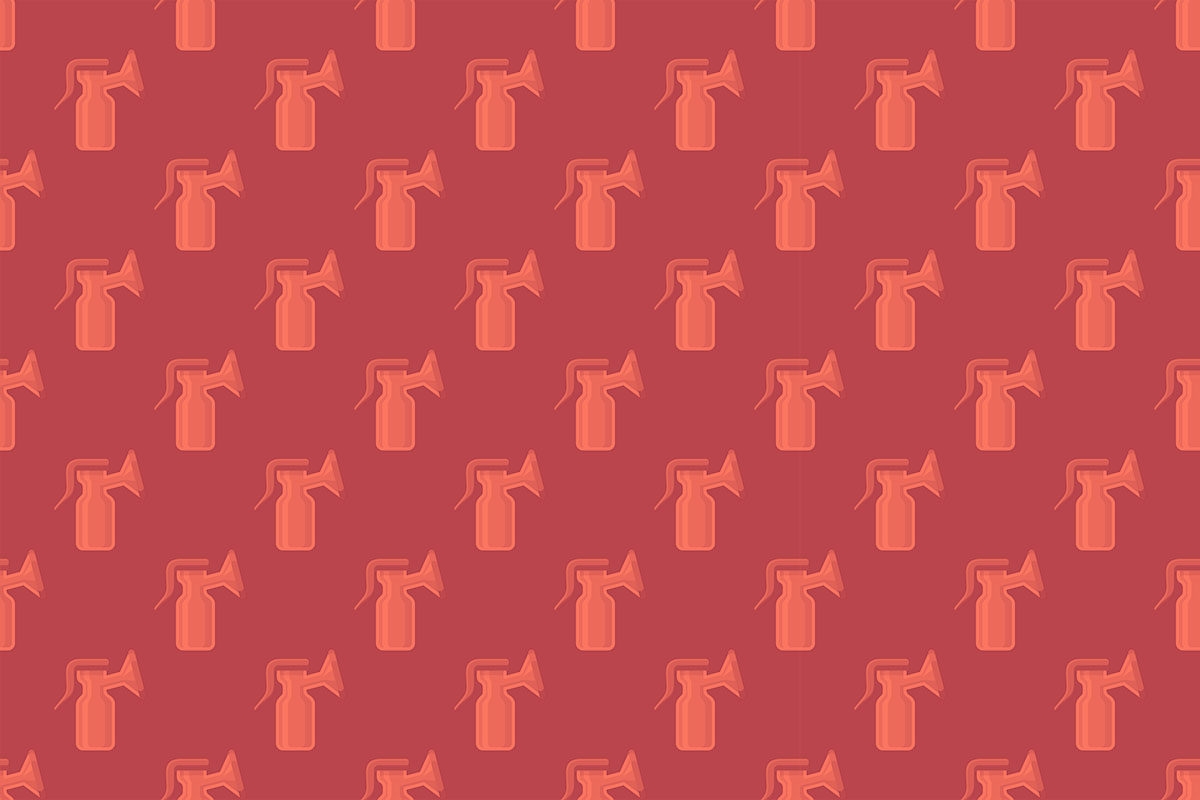 When I returned to work after the birth of my first son, I found myself in a unique pumping situation. As the rabbi of a Jewish day school, I was fortunate enough to have my own office. Since I am involved in so many aspects of leading the school and infusing it with ruach (energy), there are often many teachers, parents, and students coming in and out of my office.

Rather than simply shutting my door in order to pump, I wanted to find the right words for a door sign that indicated I was doing important work, but with a tone that would be appropriate for a Jewish educational setting. I settled on the English phrase “Mother-at-Work,” and with the help of my Israeli colleague, I landed on a Hebrew equivalent: “Ima Asukah.”

After my second son was born two years later, I logged my pumping sessions as “Ima Asukah” in my Outlook calendar as well. This time around, I was a pumping pro. I had spent much of the first few weeks postpartum pumping extra milk so as to lessen the burden once I returned to work.

My son turned 10 months last week. And since I’ve stored up enough milk to support him well beyond a year — shout out to my in-laws for their generous freezer space! — I decided that my time pumping at work had come to a close.

My mouse wavered over the option to delete “Ima Asukah” from my Outlook calendar.

“Delete series,” I responded — and with one click, the thrice-daily task of pumping at work disappeared from my schedule. Poof!

This second go-around of pumping at work seemed different — and I don’t just mean that I opted for a different brand of pump (although I did do that, too — thank you, Spectra!). I was now pumping in an era when women-in-the-workplace issues were seemingly more transparent. My second round of pumping took place at the time when Senator Tammy Duckworth was lauded for bringing her baby to the Senate floor. And at a time when The New York Times had a feature article about a Federal Trade Commission official who chose to bring her newborn to work for her first few weeks on the job.

It was encouraging to pump at a time when the challenges of balancing work and motherhood were finally being acknowledged and celebrated — if not quite solved — front and center.

I was also more confident in my ability to pump this time around. Like running a half-marathon, I knew my body did it once, so I had more confidence that I could do it again. I was also more comfortable mentioning pumping at school — I could gently say to visitors to my office that they are welcome to schmooze in the hallway but that I need to pump, or sometimes I requested a meeting time get moved a few minutes so that I could finish pumping.

As a reflection of the changing times and my newfound comfort in acknowledging that I pumped, I thought it would be nice to find a way to mark the completion of my pumping at school. Rather than simply hanging the Ima Asukah sign on my door “one last time,” I decided to throw a post-pumping party for the faculty. After all, they had been incredibly supportive. This time around, my colleagues knew that when the sign was up, I wasn’t available face-to-face, but they could text, call, slip papers under my door. 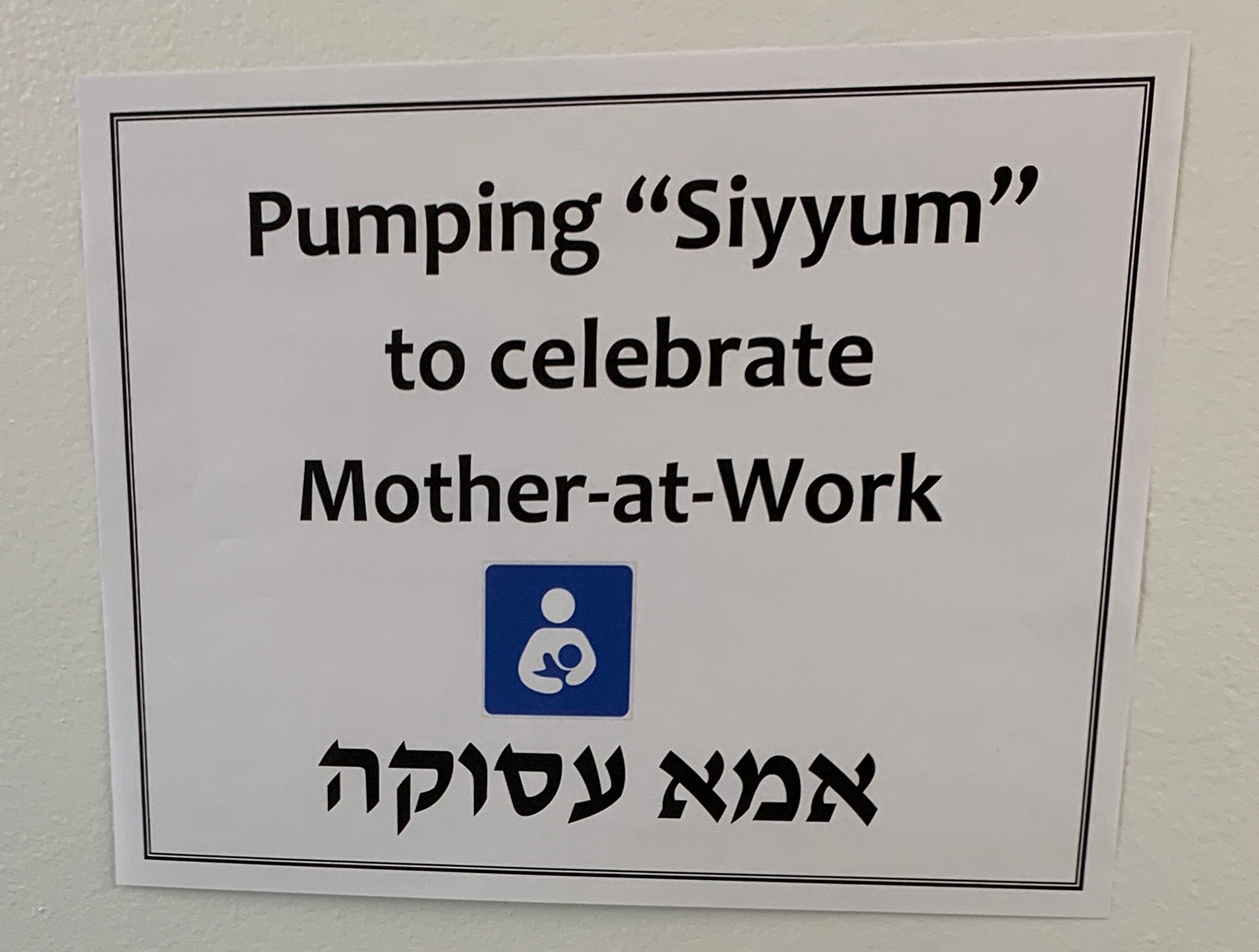 For me, as the school rabbi, a post-pumping party seemed like a wonderful teaching opportunity, as well as a chance to create a modern Jewish ritual (which is something I love to do, see Midrash Manicures!). In addition to having “milk” as the theme for all of the food items served at my post-pumping party — from ice cream to chocolate milk (with lactose-free options as well), I also added a component of Jewish study to this party.

The post-pumping party morphed into a pumping “siyyum,” a celebration of completion. I thanked my colleagues for all of their support these past few months and I recited the Asher Yatzar blessing — which is typically recited after going to the bathroom — which thanks God for making all of the parts of our bodies work. The blessing states that if but one part of our body, by being blocked or opened, fails to function, then it would literally be challenging to exist and to “stand” before God. For me, this blessing also chronicled the process of pumping: If I hadn’t had enough water or enough of the right foods, or if I was having a tough start to the work day, it could be challenging to produce enough milk during that pumping session. This blessing reminded me of how many things needed to be in place in order to successfully nourish my child.

The pumping siyyum concluded with colleagues sharing wishes of “mazel tov!” We agreed that the expression seemed an appropriate thing to say at this type of event — after all, it’s very possible we were celebrating the first-ever pumping siyyum known to womankind.

While I am sad that I won’t have the pause in my day to connect to my baby in the way that I have for the past several months, I am also relieved that the pressure to produce food for him during the day has come to a close.

Sign or no sign, pumping or not, I will continue to be a proud and ever-so-busy Ima Asuka.