The RBG Soccer Jersey That We All Desperately Need 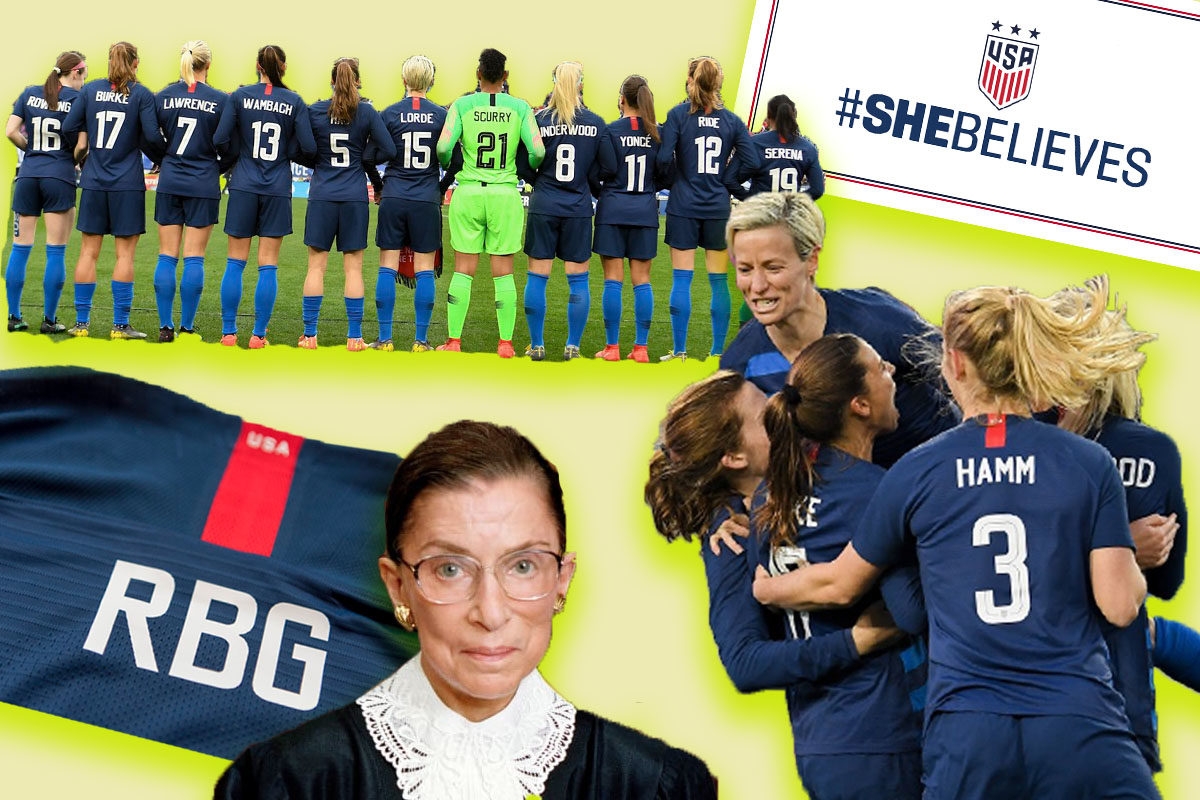 When it comes to soccer supremacy, the U.S. Women’s National Team (USWNT) is the most accomplished team in the U.S.

There’s no doubt about it — the men’s team didn’t even qualify for last year’s World Cup, whereas the women are favored to win it all in France this summer.

But this weekend gave us one more reason to kvell over the USWNT, and cement their status as the superior national soccer team. On Saturday, the players all wore jerseys emblazoned with the name of an inspirational woman on the back, including none other than Ruth Bader Ginsburg.

As part of the SheBelieves Cup — an invitational tournament that began in 2016 — the USWNT donned jerseys featuring their heroes. “In celebration of the SheBelieves spirit, the U.S. Women’s National Team will honor powerful, influential, iconic and inspirational women,” the press release explained. “[SheBelieves] was created with the goal encouraging the female leaders of tomorrow to chase their dreams. The theme of women supporting women is one the U.S. players passionately believe in, so with the SheBelieves Cup and Women’s History Month occurring concurrently, the timing is perfect for a celebration of groundbreaking women.”

The #USWNT will wear the names of iconic and influential women on the back of their @Nike jerseys today.https://t.co/6gz1QS22eg

Each player picked a woman to honor, and explained why they were chosen.

Defender Becky Sauerbrunn chose to wear RBG’s name because “She’s a complete rock star. Dissenting opinion, battling cancer and then showing up to vote… what can’t she do? I just think she’s amazing.” (We agree, Becky!)

Supreme Court was founded in 1789. This is first time in its 230 year history a Supreme Court Justice’s name has graced the back of a National Team Jersey. All Hail @beckysauerbrunn for making RBG a footballing Trailblazer 🇺🇸🙌 pic.twitter.com/waP19R7h5A

Some other amazing picks including Serena Williams by defender Crystal Dunn, because she watched Serena play before she was even watching women’s soccer, and the tennis legend is someone who “has broken down so many barriers and that’s hard to even put into words.”

Forward Meghan Rapinoe picked writer Audre Lorde, explaining, “She so beautifully and powerfully expressed all parts of herself and her experiences at once. She was a woman, a lesbian, a feminist, a person of color, a civil right activist and a poet. She understood so clearly that change does not come from playing by the existing set of rules.” (Rapinoe was one of the first athletes to join Colin Kaepernick’s protest of police brutality; she knelt during the national anthem in September 2016.)

There were some other picks that made me think, huh, like Jennifer Lawrence, J.K. Rowling, and Carrie Underwood. But who are we to judge who inspires the players?! You can read all the picks here.

Men’s team player Jozy Altidore tweeted, “Our @USWNT continues to set the bar for all of us. An honor to watch these women compete and constantly inspire the current and future generations of crazy dreamers.”

So powerful. Can’t wait for the @FIFAWWC. Our @USWNT continues to set the bar for all of us. An honor to watch these women compete and constantly inspire the current and future generations of crazy dreamers. #SheBelievesCup #USWNT https://t.co/h6Y5p4Q1IJ

We’ll be cheering them on — regardless of whose names are on their jerseys. (But also, where can we get that RBG USWNT jersey? Because we need it.)