The Supremely Jewish Netflix Show You Need to Watch ASAP 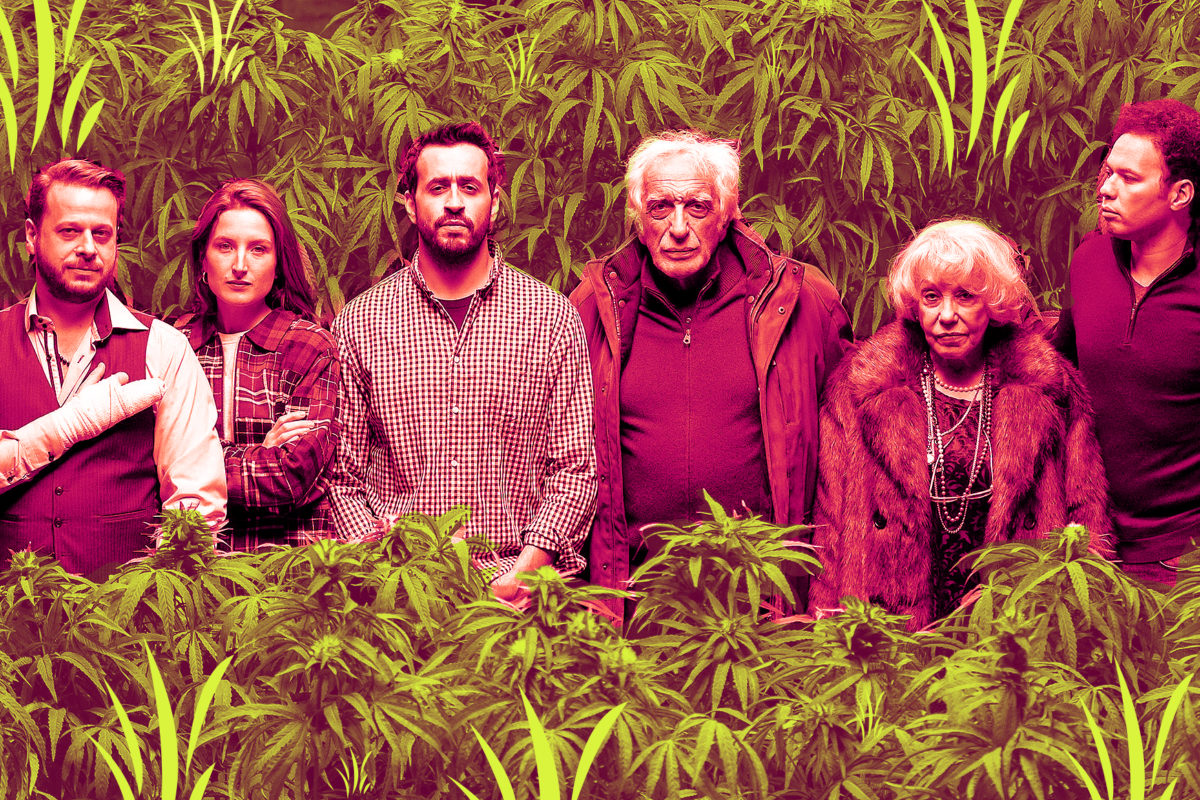 Within the first minutes of the new French comedy, Family Business — now streaming on Netflix — you see a menorah on a mantle and a kosher butcher truck zooming through the streets of Paris, adorned with the very Sephardic Jewish name of “Hazan.” You hear the words “mensch” and “bubbeleh” uttered by a no-nonsense bubbe, and you witness a family gathered at a Jewish cemetery, placing stones on a grave.

What’s remarkable about Family Business is that the show is so quintessentially Jewish — so effortlessly and accurately so — without being about Judaism at all (even surpassing Transparent in that regard). So while the series’ Yiddishkeit is undoubtedly a reason to tune in, there are many more reasons why you’ll want to watch this comedy about a family that’s attempting to turn their kosher butcher shop into a legal weed den.

The Hazan family is nothing short of a hot mess. Son Joseph Hazan (played by the very gifted Jonathan Cohen), is a 35-year-old serial failed entrepreneur. His father, Gerard (played by the talented Algerian Jewish actor Gerard Darmon), is heartbroken over the death of his wife, Bénédicte, and is running the family butcher shop into the ground.

And so, when, outside of a local club, Joseph and his best friend Oliver (played by actor Olivier Rosemberg) meet an old acquaintance, the cooky Clementine, who just returned from a stint in the U.S. as an “influencer,” and who tells them her father is about to become the health minister and legalize cannabis, Joseph finds a budding new business idea: legal weed.

The business may be Joseph’s idea, but it’s the Hazan women who are the backbone of the family. Bene, the invisible deceased mother, had kept the family business afloat before her death, and Aure, Joseph’s sister, is a number-crunching whiz. But the true badass of the family — and by far the highlight of the show — is one of the best Jewish grandmas I’ve ever seen on TV: Ludmila Rozenberg, played by Holocaust survivor Liliane Rovere, is the no-nonsense, hardworking, whip-smart Jewish lady with chutzpah we should all aspire to be.

It’s Ludmila who supports her grieving son-in-law. She is the one with romantic advice for her grandson — who is in love with Aida, who comes from a Muslim family and is the sister of his close pal, Ali — and for her closeted lesbian granddaughter. She also helps kick-start the new family business by reconnecting with her weed-growing Dutch former lover, and uses her bonsai horticultural skills to bring the family’s new strain of weed — the brilliantly named Pastraweed, as in “Pastrami weed” — into bloom.

Another surprise appearance in the show is Enrico Macias, who is one of the most amazing and prolific Sephardic singing sensations of France. A favorite among a generation of French speaking Jewish grandparents, he plays a partner in the weed business.

While Family Business has been compared to dark, drug lord shows like Breaking Bad, the show is too kind and loving to be that — though Dutch actress Tamar Baruch does play a pretty insane, if comical, drug overlord. And while each episode ends with a nail-biting cliffhanger — much like another of my Netflix favorites, Dead to Me — the show doesn’t really take the business of growing marijuana super seriously.

You see, it’s the family, and not the business, that’s at the heart of Family Business, which is full of vulnerable, believable displays of affection. Jonathan, Oliver, and Ali are constantly calling each other frère, “brother” in French, and they truly act like ones.

Gerard openly tells his children he loves them, and he breaks down in tears at the mention of his deceased wife. Ludmila assures her grandson, who feels like a constant failure, that he will soon blossom into an impressive bonsai.

Excellent Jewish humor is everywhere — while researching weed in an Amsterdam coffee shop, for example, Gerard asks if the marijuana edibles are kosher (“We’re not in Israel!” Joseph exclaims). They mask the odor of their growing crop with pots of kishke, as well as mellukhia, the Sephardic dish known as Jew’s mallow soup. Yiddish and Arabic words are interspersed into speech, and there’s a truly funny scene in which one of the characters says kaddish for some lost crops of weed.

If there’s a fault to Family Business, aside from some juvenile humor and gratuitous violence, it might be its utopian pink glasses about France, a country mired in rising anti-Semitism and social unrest. If Dan Levy aspired for Schitt’s Creek to portray an ideal world without homophobia, then Igor Gotesman, the creator of Family Business, imagines an ideal Paris, without racial tensions, Islamophobia, or anti-Semitism.

Given the current political climate, it may be a bit hard to believe. But I, for one, enjoy the warm, quirky world of Family Business and, clocking in at just six 30-minute episodes, I can heartily recommend that you take a short trip into that world, too.