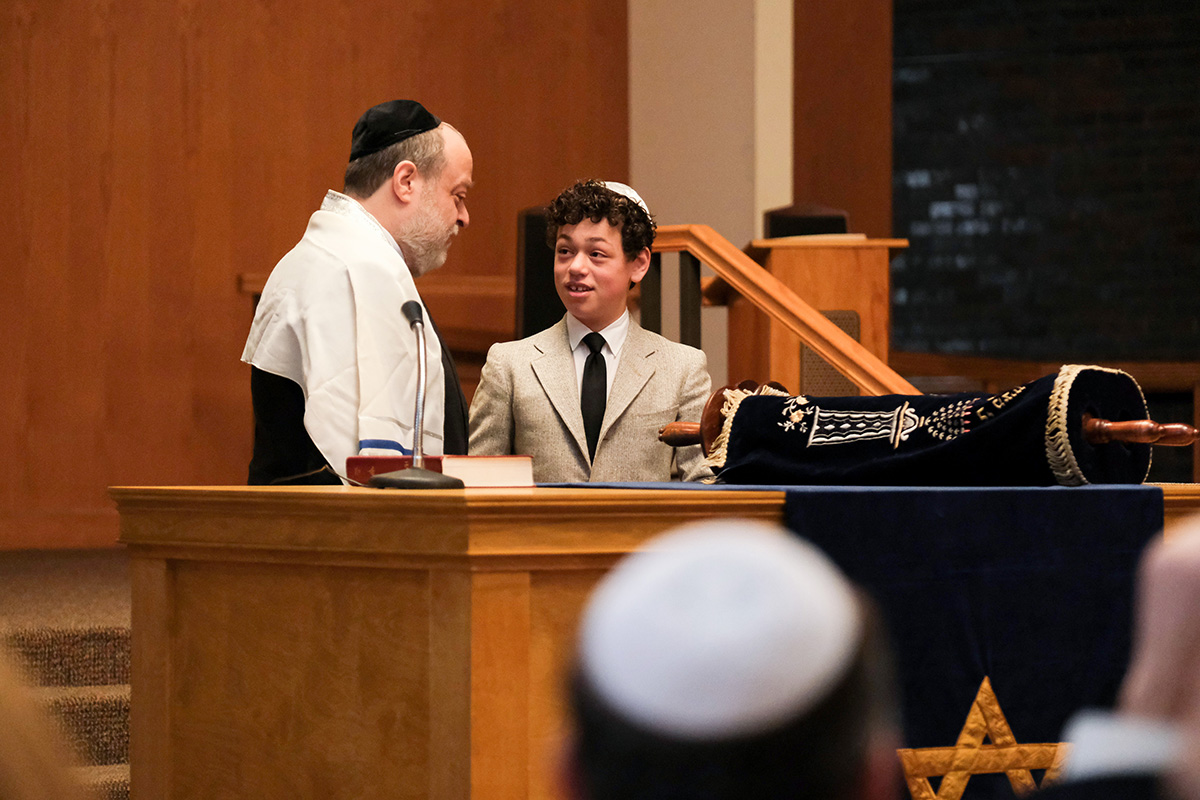 Back in 2020, Julian Lerner was supposed to have his bar mitzvah in Israel, alongside his parents and grandparents — and he was really looking forward to it. But then COVID hit, and like many a pandemic bat and bar mitzvah, those plans went down the drain.

But Lerner still got to have a bar mitzvah, in a way, and a pretty unique one at that. His bar mitzvah was in front of thousands of viewers, and took place in 1968 Montgomery, Alabama, while he took on the role of Brad Hitman in the new reboot of “The Wonder Years.”

While Lerner, 14, is still hoping to fly to Israel post-pandemic, he did consider the onscreen bar mitzvah during the most recent episode, “Brad Mitzvah,” which aired on ABC/Hulu this week, as a surrogate rite of passage. “It was great to kind of have one. There were cameras and stuff, it was a little different. But it was great,” Lerner tells Kveller.

It’s been 33 years since the original “The Wonder Years,” starring Jewish actor Fred Savage as teen Kevin Arnold, aired its historic bar mitzvah episode in 1989. In that episode, which features a Shabbat service, Paul Pfieffer, played by Jewish actor Josh Saviano, comes of age, and Kevin, who isn’t Jewish, is jealous about how the festivities eclipse his own birthday.

This time around, things are very different. Just like Paul Pfieffer, Brad Hitman is the best friend of the main character of the show, Dean Williams, played by Elisha “EJ” Williams. Yet while the new reboot also takes place in the 1960s, the show, created by Saladin K. Patterson, centers around a group of Black kids at a mostly white high school and explores racism and the civil rights movement. Brad is the only white person in his friend group — and the only Jew.

The bar mitzvah is a bonding experience for Brad and Dean, as Dean gets to see that despite his whiteness, his friend also has things that other him. The episode was written by Yael Galena, and Brad’s speech was based on her own bat mitzvah speech as well as rabbinical texts.

The episode is a transformative one for Brad’s character: “In the beginning, Brad really shakes off kids making fun of him, even though it really hurts him. Other people can see that it hurts him,” Lerner says, referring to a scene in the opening of the episode where a kid throws a penny on the floor, expecting Brad to pick it up because he is Jewish.

But going through the bar mitzvah, and dealing with his insecurities around it, gives Brad the strength to embrace his Jewish identity:

“Being Jewish in Montgomery is about being different all of the time,” Brad tells the crowd at his synagogue, donning a white embroidered kippah, dressed in a suit, a festive tallit resting on his shoulders. “So from now on I’m not going to stand by while people make fun of me and try to make me feel bad, so instead I’m standing up for myself, for my people and for what I believe is right. I may not know what my third name is, but I do know what I am — a proud Jew from Alabama.”

“This change really is going to shape who Brad becomes as a man, as he grows up,” Lerner says about his character.

This moment also helps connect Dean with his friend. “It was in that moment that I started seeing Brad in a new light,” Don Cheadle, who voices the adult Dean in voiceover, says after Brad’s speech. “Up until that point, I could name all the things that made us different. But after Brad’s speech, it was clear we had way more in common than I ever realized. And it was those similarities that made us that much closer and our friendship that much stronger, even to this day.”

Saladin has shared his own thoughts about the episode: “Growing up in the deep South, I didn’t ‘think’ I knew any Jewish kids,” he wrote on Instagram. “As an adult, I learned that I probably knew more than I’d realized and that, unfortunately, they just didn’t feel comfortable being outwardly expressive of their culture and heritage. I thought it’d be good to explore what that experience must’ve been like through the characters in our show.”

Fred Savage is involved in this reboot, though this time around he’s behind the scenes as executive producer and director, supporting the kids. “It’s good that there’s somebody who I can relate to,” Lerner tells me. “He’s really experienced what we’re experiencing right now. And he’s taught us so many things. He’s a great role model for us.”

For “Brad Mitzvah,” Savage even connected Lerner with his own kid’s bar mitzvah tutor.

Lerner may only be 14, but he is a veteran actor. He got into acting when he was 7, when a friend of a friend of the family, who worked at an agency, joined them for dinner. Since then, he’s played a young Pete Davidson on SNL, a young Paul Rudd in an Audible original, starred in the award-winning short film “Leo the Lionhearted” and played a young Jewish kid in George Street Playhouse’s “Last Days of Summer.”

His big break was starring in Netflix’s “Yes Day,” playing young Nando Torres opposite Jeniffer Garner. He also plays Lucas in the Fred Rogers Studios and PBS show “Alma’s Way” — which was created by Sesame Street alum Sonia Manzano, and inspired by her childhood in the Bronx. In the show, Lerner, a gifted vocalist, sings in Spanish.

“I love working on projects that really embrace diversity and explore diversity,” he says.

Lerner knows that in some ways, his Jewish experience couldn’t be more different than Brad’s. “Being 13 years old and growing up in Montgomery, Alabama is definitely different from growing up in the Upper West Side in, you know, 2022,” he tells me. Still, he enjoys exploring the differences and the similarities between him and his character. “Brad’s fun. He’s funny. He loves his friends.”

And Lerner loves being Jewish. His favorite Jewish food is his dad’s (savory!) matzah brei — “it’s the best, so good!” — and he eats it all year round. He loves Hanukkah and latkes (and the presents, duh) but especially loves Passover, when he gets to spend time with his whole family. During the summers, Lerner also spends time with his family in Florida, where they go to synagogue together.

He didn’t get to see his grandparents much during the pandemic outside of Zoom and FaceTime, but they did watch the episode. “They were so proud of me. And I’m really, really glad that they got to see this,” he reports.

“Hopefully, people learn that seeing these events, the 1960s, from the perspective of a Black family and through the eyes of a Jewish kid is really important,” Lerner says. “Because I think it really reminds us that the civil rights movement of the 1960s is still relevant today. And it reminds us that we really still have a long way to go until we achieve equality.”