These Jewish Teens Are Working to End Gun Violence 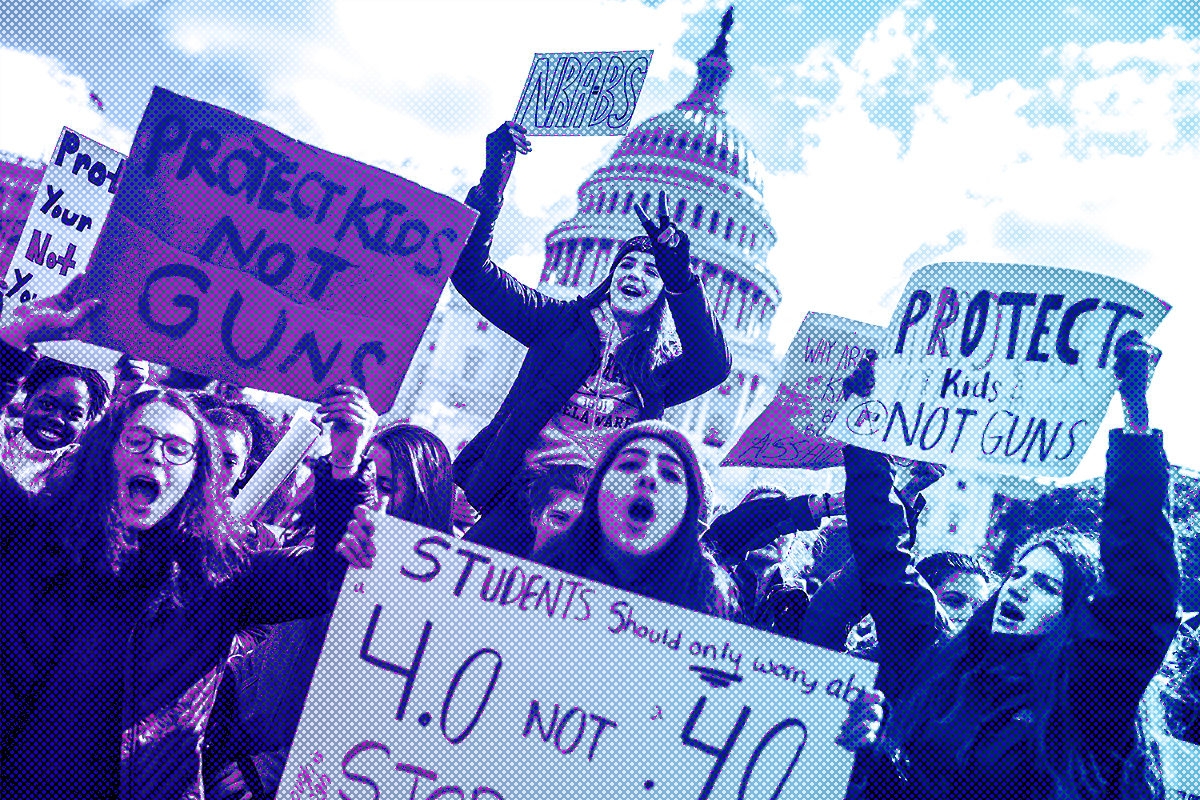 According to the Gun Violence Archive, there were 417 mass shootings in 2019. That’s more shootings than there were actual days in the year. While gun control legislation seems to be at a standstill, and hope and prayers seem to be all that our children are offered, there is an inspiring movement of teens working arduously to prevent gun violence and make our country safer.

These three Jewish teens are all growing up during a time in which school shootings are ever-present, with live shooter drills the new normal. They were all driven into action after witnessing the shooting in Marjory Stoneman Douglas High School in Parkland, Florida, that took the lives of 17 people and injured 17 more.

For their incredible work to stop gun violence, these three teens were awarded the 2019 Diller Teen Tikkun Olam Award. Let’s meet them:

Ethan Asher’s friend lost his friend, Alyssa Alhadeff, at the shooting in Parkland. The teen from Roswell, Georgia decided he had to do something. “I quickly turned my anger and sadness into motivation to change the conversation about gun violence prevention,” Asher, 17, said.

In March of 2018, one month after the shooting, he marched the streets of Atlanta alongside civil rights icon Representative John Lewis, as the co-founder of the Georgia faction of March for Our Lives, as part of the largest single day protest against gun violence in the history of the country.

I am so so so incredibly honored, and humbled to have marched through the streets of Atlanta today, demanding that our voices are heard. I am so proud to have been a part of this amazing March, together we can do ANYTHING! #enough #neveragain #mfolatl #atlanta #change #marchforourlives #votethemout #protest #activist #youthleadership

Through his work with March for Our Lives, “I have become connected with so many survivors and victims’ families,” Asher said. “I have used the pain and anger to motivate myself to keep fighting for a safer future.”

My school is not a warzone, my teacher is not a soldier.

My temple is not a warzone, my Rabbi is not a soldier.

My home is not a warzone, my mother is not a soldier.

My country is not a warzone, and I am not a soldier.#spreadlovenothate #DisarmHate

One year after its founding, March for Our Lives, Georgia, has made great strides: “Our organization has been able to successfully organize the largest protest in the history of Georgia, form one of the largest statewide youth networks, significantly increase youth voter turnout, and pass several pieces of common-sense gun legislation.”

Nowadays, Asher is a community manager for Future Coalition, a national network of youth-led organizations and youth organizers.

The 18-year-old decided she had to do something about it: She created NYC Says Enough (NYCSE), an organization devoted to helping end gun violence and an outlet for direct teen and youth action.

“I remember a relative of mine telling me that, stereotypically, Jews don’t protest violence,” Geismar said. “I questioned this, and they responded it was a generational phenomenon. I thought to myself, ‘Then this is where it ends.’”

NYCSE connects students in disproportionately impacted communities with their representatives to advocate for stricter gun control laws. At their first rally, on April 20, 2018, some 5,000 students marched together.

“The politicians present or the chanting students at the rally on are undoubtedly important, but my biggest pride is creating a group of strangers and turning it into a face of resistance,” Geismar said.

“Our work is not just focused on gun violence, but on the areas surrounding gun violence such as the school to prison pipeline, believing women in sexual misconduct cases, lobbying and finance misuse, and social justice as a whole,” Geismar said.

In addition to a Diller Teen Tikkun Olam Award, Geismar was recently selected as one of Teen Vogue’s 21 Under 21. She currently serves as the associate director of GenZ Girl Gang, and is a national organizing fellow for Team Enough of the Brady Campaign United Against Gun Violence.

Geismar’s achievements and her relentlessness are truly incredible. But she also appreciates that all her important work can’t be done alone: “Sometimes it’s not about telling others where the path is and how to follow it but fighting to get there together,” she said. “A leader doesn’t always need to be at the forefront, sometimes they’re better in the back.”

“At some point, we have to stop and realize, ‘enough is enough!'” Casey Sherman, the lead coordinator of March for Our Lives Parkland, cried from the podium back in 2018, when she marched with 30,000 others to end gun violence. The crowd chanted with her, “Enough is enough.”

It’s inspiring to see her rousing speech, which was covered by media outlets across the country. The now 17-year-old had just recently survived a shooting at her school that left 17 dead. She told the teens around her: “We are here because we know we can make a change, we’ve already seen what we can do; our voices do matter. If our current legislative officials will not work towards gun safety measures, that we, their people support, then we will elect new representatives who will. March, rally, and register to vote. Never let anyone tell you what you can or can not do.”

Best team I could ever ask for. I am so proud the support we received from our peers, and everything we have all worked to accomplish. Stoneman Douglas students, I truly hope we did right by you. Everything is for you and for the 17. #marchforourlivesparkland pic.twitter.com/eqJNCoTVAJ

Sherman followed her own advice, and her work towards a more just world didn’t end with that iconic march. She decided to build a platform that would help her continue the important work of fighting for social justice. Thus, Empower the People was born. The non-partisan, non-profit organization facilitates high school peer-to-peer voting registration, but that’s not all. Empower the People also create a curriculum for D.C. area high schoolers to raise awareness about social issues.

“Empower the People was created with the intent of providing education on both civics and prevalent societal issues, as well as the means necessary for people across the country to become advocates for change in their own communities,” Sherman said.

Sherman credits her Jewish upbringing for her passion for social justice: “I am forever rooted in the idea of tikkun olam,” she said. “I am incredibly grateful to the Jewish community which has helped shape me into the person I have become and will continue to guide me towards the person I want to be.”

We are in awe of these teens, who are being the change they want to see in the world. We have so much to learn from all three of them. Mazel tov!