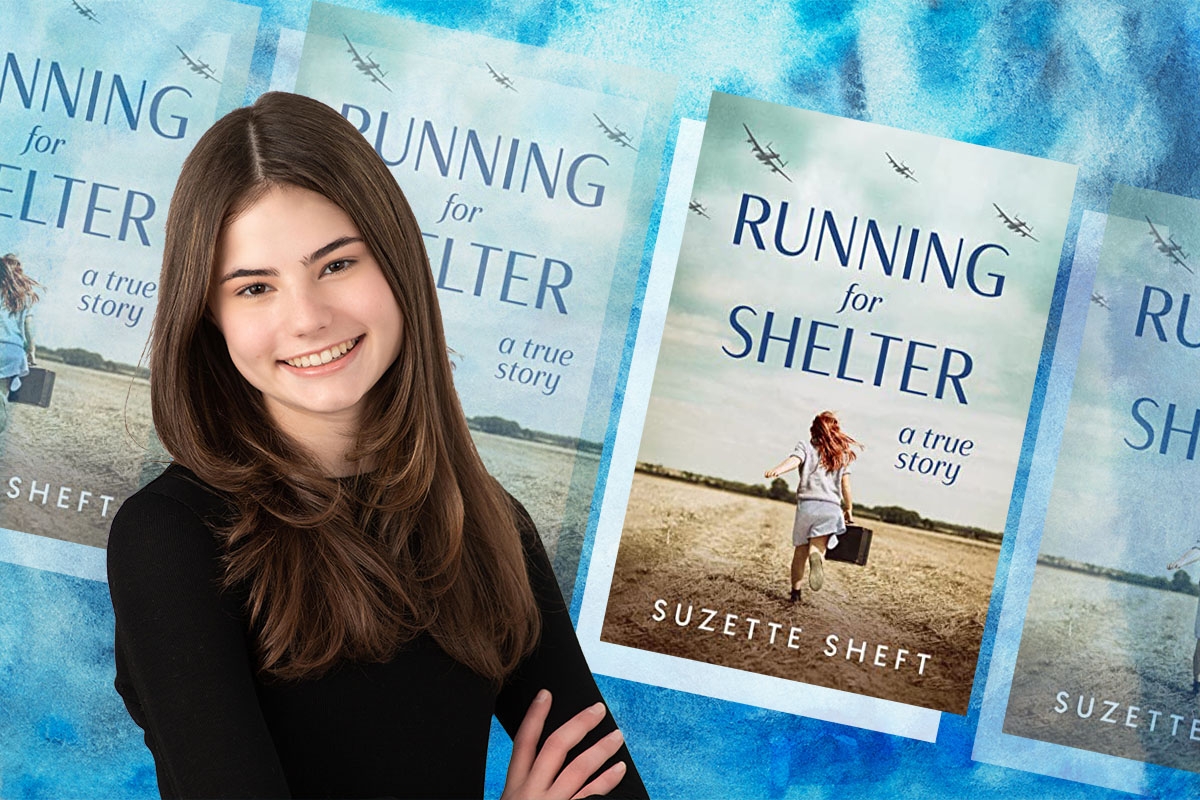 The year Suzette Sheft turned 13 was a watershed time. She had her bat mitzvah, she started writing a novel — and she lost her father to pancreatic cancer.

The novel she started writing that year, and finished two years later, is now a published book called “Running For Shelter: A True Story,” and it is dedicated to the memory of her father, Peter Sheft, who was a board member of 70 Faces Media, Kveller’s parent company . It tells the story of his mother, Monique Sheft, who survived the Holocaust (she was known as Inge Eisinger at the time).

With clear evocative prose that alternates between third and first person, Sheft takes us through the story of her Omi’s (German for grandmother) survival, revealing Inge’s journey, which begins at age 7 in Vienna, Austria before Kristallnacht, going to a small village in France where she sheltered with her grandmother, and finally to a boat on the Atlantic which took her to New York, where Suzette, 16, now lives with her mother, twin brother and two dogs, and studies at Horace Mann School.

Writing a Holocaust novel may not seem like a typical endeavor for a young teen, but Sheft has always been fascinated by her family’s story. Growing up, wherever she went, she and her father would try visit the local Holocaust museum, but it was only after she read a three-page account her Omi wrote about her survival that Suzette realized she wanted to combine her love for writing with her passion for preserving the memory of the Holocaust.

Sheft started writing the book before her father passed away. After she lost him, she lamented all the many stories he told her about his life that she never documented. “His death prompted me to realize the importance of giving a voice to those silenced through writing, before it is too late — just as it was with him,” she writes in the book’s opening. “I would give anything for my dad to read this book.”

“My grandmother and I have spoken about the fact it is very sad that my father never knew that I wrote this book,” Sheft shared with Kveller over e-mail. “I know he would have been thrilled to see it in print.”

Kveller talked to Sheft about the Holocaust books that inspired her, how writing the book affected her grief over her father, and why she thinks sharing her grandmother’s story is more important than ever.

Have you always wanted to be a writer?

Ever since I was a young girl, I loved writing stories. When I was in elementary school, my friends and I wrote stories together through Writopia. After my father’s passing, I was driven to write this book. My father had recounted my grandmother’s Holocaust stories for years, and after his death, I decided I needed to capture them on paper. Then, while conducting my research, I came across statistics which revealed that students’ knowledge of the Holocaust was limited, which ignited even greater urgency to share my grandmother’s story.

How do you think that writing this book and this story affected your grief over your father’s death?

Following his death, every thought of my father brought immense pain, so I chose not to remember. Eventually, the pain became smaller, and as I remembered the stories of his childhood he had shared with me every night at bedtime, I realized that they were fading. I regretted the fact that I had never taken the time to write down his memories, so my father’s death forced me to understand the importance of preserving the stories of our loved ones before it is too late. At 13, I learned that I could not let my family’s stories fade away, no matter the pain that comes with remembering. At that moment, I resolved to write my grandmother’s story of surviving the Holocaust.

Tell me a little bit about how you made the time to write this book. When did you write it, and was it challenging to finish?

I began writing the book during pockets of my free time. When I was 13, I spent the summer interviewing my grandmother in depth and then writing and re-writing. Then COVID hit and I found myself with even more time to spend on the book. I found the most challenging part of the process was not continuously editing the whole book since I was 15 years old when I finished and I was more sophisticated than when I started at 13.

Who are some of your favorite authors? Have you read a lot of Holocaust fiction or nonfiction?

I love reading YA novels because they share stories with themes of friendship, love and loss that everyone can relate to even when set in foreign or fantastic places. Specific to historical fiction, the dialogue and storytelling bring the past to life and capture my attention in ways that academic history books have not.

A few of my favorite Holocaust novels are “The War That Saved My Life” by Kimberly Brubaker Bradley and both “They Went Left” and “The Girl in the Blue Coat” by Monica Hesse. I also adore reading all of Alan Gratz’ works, one of which is a Holocaust work, “Prisoner B-3087.” Of course, in nonfiction, the raw emotion and reality of Elie Weisel’s “Night” is unmatched. Growing up, I also loved “To Kill A Mockingbird.”

What were some of the most surprising things to you about your grandmother’s story?

So much I was unaware of, especially how close she was to her own Omi. After learning about her Holocaust experience, I realized that they were the heroes of each other’s story. Together, they found the strength and courage to survive throughout their years of hiding. Yet, simultaneously, I was also struck by how alone she had felt living through so many years of displacement and upheaval, never able to find a familiar place to call home.

Was there anything that was particularly hard for her to share or for you to process?

Originally, she focused on the surface elements of her life: her apartment, family
dynamics and schooling. Soon, though, everything about the time leading up to the war came rushing out, beginning with the year before the Germans invaded Austria and when the Nazis showed up at her apartment. It felt like she remembered everything, even the most minor details and anecdotes, particularly about her relationship with her mother.

It was hard for her at times to tell me about the extremely difficult situations she encountered — such as when she was taken advantage of by her driver when being smuggled over the border.

What does being Jewish mean to you? Has this book changed your relationship with Judaism?

Judaism has always been an important part of my life. My bat mitzvah was very significant for me as a person. Writing this book has shown me the importance of preserving the legacy of not only the Jewish people but of all past generations.

Antisemitism is, unfortunately, in the news right now. As someone who has written a Holocaust novel, how does that make you feel?

The Anti-Defamation League recorded 2,717 incidents of antisemitic hate crimes in 2021, and the posting of antisemitic remarks by celebrities like Kanye West have the ability to spread their hate to a young audience. The voices of young writers who document the true experiences of the Holocaust, like me, Dov Forman or Nechama Birnbaum, must be louder than those that propagate antisemitism, and we must all find ways to share the true stories of the Holocaust with my generation to ensure that they never forget them.

Do you have any future writing projects in the works?

While I was thrilled to be able to share my grandmother’s story with my generation, the only things I am writing right now are lab reports and papers for school. However, I have thought about writing another story about another genocide in the world.

You can buy “Running for Shelter” on Amazon, Bookshop.org, or wherever you get your books. It is currently available for free on Kindle Unlimited.