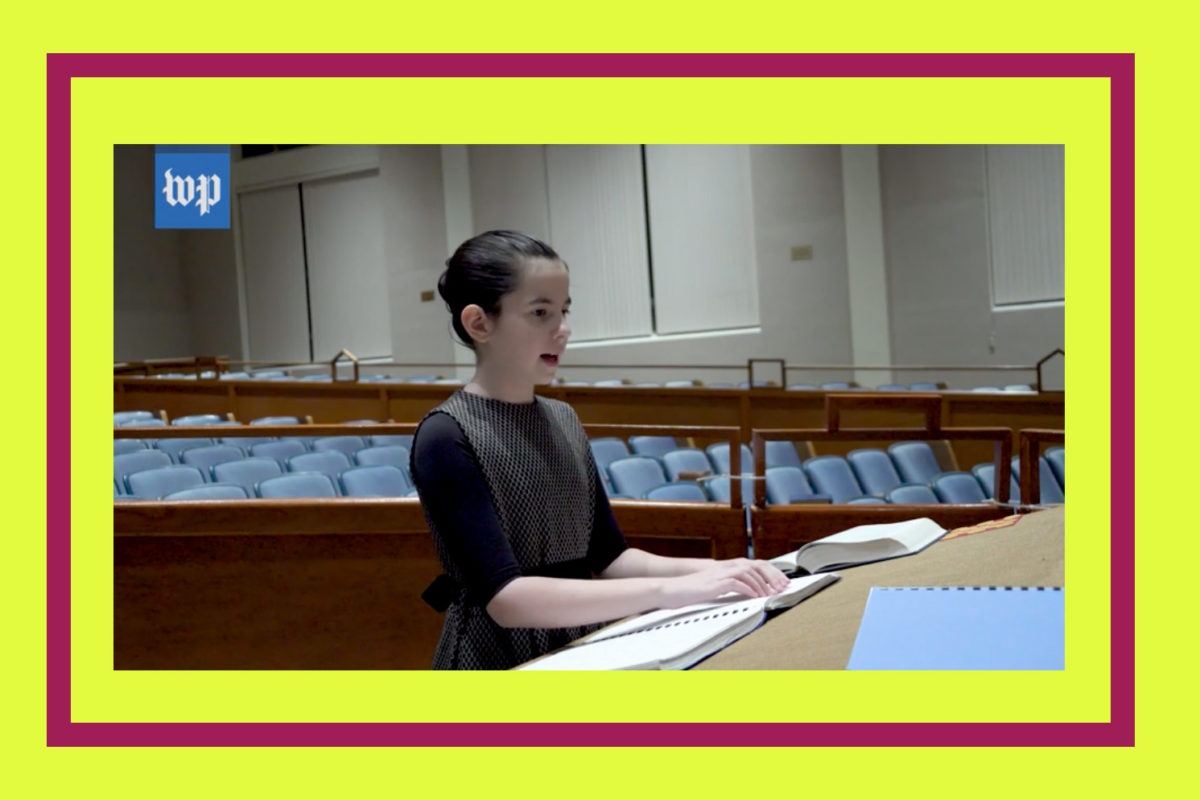 Preparing for a bar or bat mitzvah is a challenge for any preteen — it requires hours of preparation and dedication.

But for Batya Sperling-Milner, the challenge was even more enormous. First off, Sperling-Milner, the third of four kids, is blind. Secondly, her family, which belongs to the Ohev Sholom congregation in Washington, D.C., is Modern Orthodox, which means that the standards for her bat mitzvah ceremony had to be a lot more exacting than it would for a kid belonging to a more liberal congregation.

Luckily, Sperling-Milner — who seems like a delightful and hardworking 12-year-old — had two very dedicated parents at her side. And, with the help of a family friend who is also a software engineer, she managed to stand in front of her congregation and read from the Torah just like any other kid would.

In surmounting that challenge, Sperling-Milner achieved way more than completing the important Jewish right of passage. According to the Washington Post, the encoding and computer program created for her bat mitzvah “may wind up transforming the Torah-reading experience for visually impaired people.”

Apparently, while preparing for the bat mitzvah, the family learned that there is no braille system for “trop,” the markings that indicate how the Hebrew text should be sung. Sperling-Milner would have had to learn the cantillation of her portion by heart by listening to and memorizing a recording of it being chanted, a method that was frequently employed by seeing-impaired kids in the past (and, yes, by quite a few kids who don’t have vision impairments as well. No judgements!).

Family friend Danny Sadinoff, an Israeli software engineer, decided it was time for a change. He created new braille characters to signal that a trop is coming —  and 20 characters for each of the 20 trops. Even more impressive, according to the Washington Post, he “wrote a computer program that translates the trop and combines it with existing Braille Bibles so that a reader can select any Bible verse and have the text with trop.”

If this isn’t incredible enough, consider the fact that, before the bat mitzvah took place, the family had to convince their community that blind people should be accepted at Torah readers and leaders. Mom Aliza Sperling wrote a 40-page paper making a case for her daughter and other visually-impaired people to be fully accepted. She said that an old edict that forbids blind people from reading the Torah as a community leader (because they memorize, rather than read) predates the creation of Hebrew Braille.

In the end, Sperling-Milner’s bat mitzvah went swimmingly. Her friends painted her hand with henna to look like a yad (literally Hebrew for “hand”), the metal or wooden pointer used by the Torah reader to help her keep the place as she reads from the scroll.

According to Ohev Sholom’s Rabbi Shmuel Herzfeld, “every single person in the synagogue showed up to hear her read, and we all felt we were in the presence of greatness.”

How moving is that?!

Watch the lovely Batya Sperling-Milner explain to the Washington Post the process she went through here: