This Gay Jewish Couple Has Twins, But the Government Only Considers One Kid an American – Kveller
Skip to Content Skip to Footer

This Gay Jewish Couple Has Twins, But the Government Only Considers One Kid an American 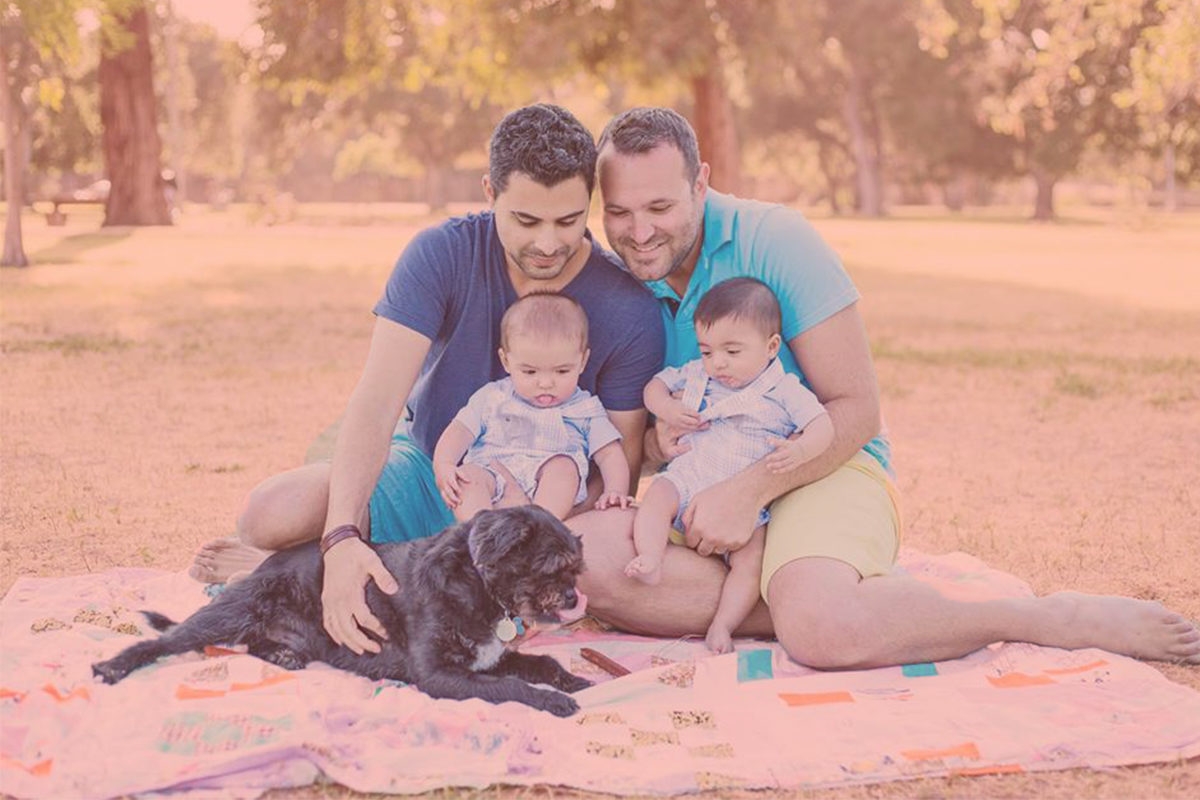 When I was a student, I would always feel a pulsing in my veins when I read or heard about injustice. “How,” I wondered, whether aloud or silently, “could people just sit by and do nothing as their government did terrible things?” (Actually, I still feel that way, if we’re being honest.)

And here we are. We live in an era where we can find out about almost anything in the world with a literal touch of our fingers — and yet, so many of us feel impotent in the face of injustice.

We shouldn’t. When we see something wrong, we should summon up our power and do whatever we can to combat it. As Rabbi Tarfon said in Pirke Avot, “It’s not incumbent upon you to complete the work — but neither are you free to desist from it.”

In other words, as humans and particularly as Jews, we are obligated to do something to repair the world.

Of all the injustices in the world, I’m going to focus on one particular instance today. Here goes: It’s an injustice to tear families apart. It’s an injustice to treat people differently from one another on the basis of their sexuality. And yet, the U.S. State Department — our government, with our tax dollars — is currently actively trying to tear apart one Jewish family in Los Angeles.

And we must not stay silent.

Ethan and Aiden Dvash-Banks are the 2-year-old twin boys of a same-sex married couple: Andrew Dvash-Banks, a dual citizen of America and Canada, and Elad Dvash-Banks, an Israeli citizen. Both men live in Los Angeles, and both are fathers to the twin sons they had via surrogacy.

And yet, the U.S. State Department will only recognize Aiden’s birthright United States citizenship, and not his brother’s.

Just how is this possible? I’ll back up: Ethan and Aiden were conceived using assisted reproductive technology. The egg donor was anonymous, and the twin boys were carried by a gestational surrogate. Twins, in general, and especially fraternal twins, result from two different eggs being fertilized by two different sperm. Aiden was conceived with Andrew Dvash-Banks’ sperm, while Elad is Ethan’s biological father.

Both men are recognized as legal parents to the boys, and both are named on each child’s birth certificate. In other words, Andrew, the American, is listed as the father to both boys.

The twins were born in Canada, where Andrew and Elad got married, but the couple — like so many couples with young children — decided to move to Los Angeles to be closer to Andrew’s family. They went to the United States Consulate in Toronto to certify their kids’ American citizenship and get United States passports.

This is where things went awry. At the consulate, the couple were told that the twins had to take a DNA test to prove a genetic connection to Andrew, according to the lawsuit the couple then filed against the State Department.

Usually, if a U.S. citizen marries a foreign national, and they have a child while they live abroad, that couple’s children are entitled to American birthright citizenship. Up until this point, proving a biological connection between the child and the U.S. citizen parent with genetic testing, in those circumstances, has not been required by law.

“If we were a straight couple and I was an Israeli woman and both of our names were on both kids’ birth certificates, would you ever require us to perform a DNA test?” Elad asked hypothetically in a video about the case.

In February, the California federal district court ruled that both children are American citizens. But now, however, the State Department is appealing to have that decision overturned. In other words, our government is trying to make sure that a child of an American cannot be an American citizen.

Just picture this scenario for a minute. Imagine having two kids — twins! — but only one is considered an American citizen. Not only would this be psychologically problematic, but consider all the on-the-ground issues that would come up in the day to day course of parenting, such as tax status to day care enrollment.

Before the district court’s ruling, Ethan was living as an undocumented baby in California. This caused anxiety for the family, and without American citizenship and a passport for Ethan, it was nearly impossible for him to get to know his family in Israel, as he couldn’t travel, according to the New York Times.

As Aaron C. Morris, who is executive director of Immigration Equality, a national LGBTQ immigrant rights organization that is assisting the couple, said in a statement: “Once again, the State Department is refusing to recognize Andrew and Elad’s rights as a married couple. The government’s decision to try to strip Ethan of his citizenship is unconstitutional, discriminatory, and morally reprehensible. This is settled law in the Ninth Circuit, which has already established that citizenship may pass from a married parent to a child regardless of whether or not they have a biological relationship.”

Andrew and Elad said in the same statement, “We’re outraged that the State Department is so intent on harming our family and the LGBTQ community. The fight is not over, and we will not rest until our family is treated fairly and equally. Nothing can tear us apart. The four of us are unbreakable.”

The couple’s rabbi, Rabbi Sharon Brous, told Kveller, “Compelling the children of gay parents to undergo biological testing when such tests are not required of heterosexual couples, permitting citizenship to one twin and not the other — these are cruel acts of government overreach, ironically pursued by the very people who’d claim to support small government.”

She added, “We stand with the Dvash-Banks and cry out for justice, equality and fairness, for them, for the whole LGBTQ community, and for all who suffer discrimination at the hand of our government.”

You can watch a video about the beautiful Dvash-Banks family here. And then, after you watch it, and see a couple of people who love their children just as much as you love your own, don’t sit back and do nothing. As the Talmud says, “all of the people of Israel are responsible for one another.”

Here are three things you can do to help:

1. Post this video and a description of the situation to your social media (or hey, even this piece!) and encourage others to help.

2. Donate to Immigration Equality, an organization fighting to make sure that families like the Dvash-Banks’ are not discriminated against due to not being heterosexual. You can donate here. You can also send the Dvash-Banks couple a note conveying your support of them care of the organization.

3. Write to the State Department and ask them why — when their very website says that the minor children of U.S. citizens in same-sex couples are to be treated the same under the law as those of heterosexuals — the State Department is choosing to spend taxpayer time and money on parsing out the DNA of the Dvash-Banks couple’s children. You can write to them here.

Becoming a parent, as we all know well, makes your heart bigger: it expands with the love of your child. As parents, we can feel for and understand what the Dvash-Banks family is going through — and as Jews, we should not countenance discrimination under the law, having suffered so much from it ourselves. Let’s take action.