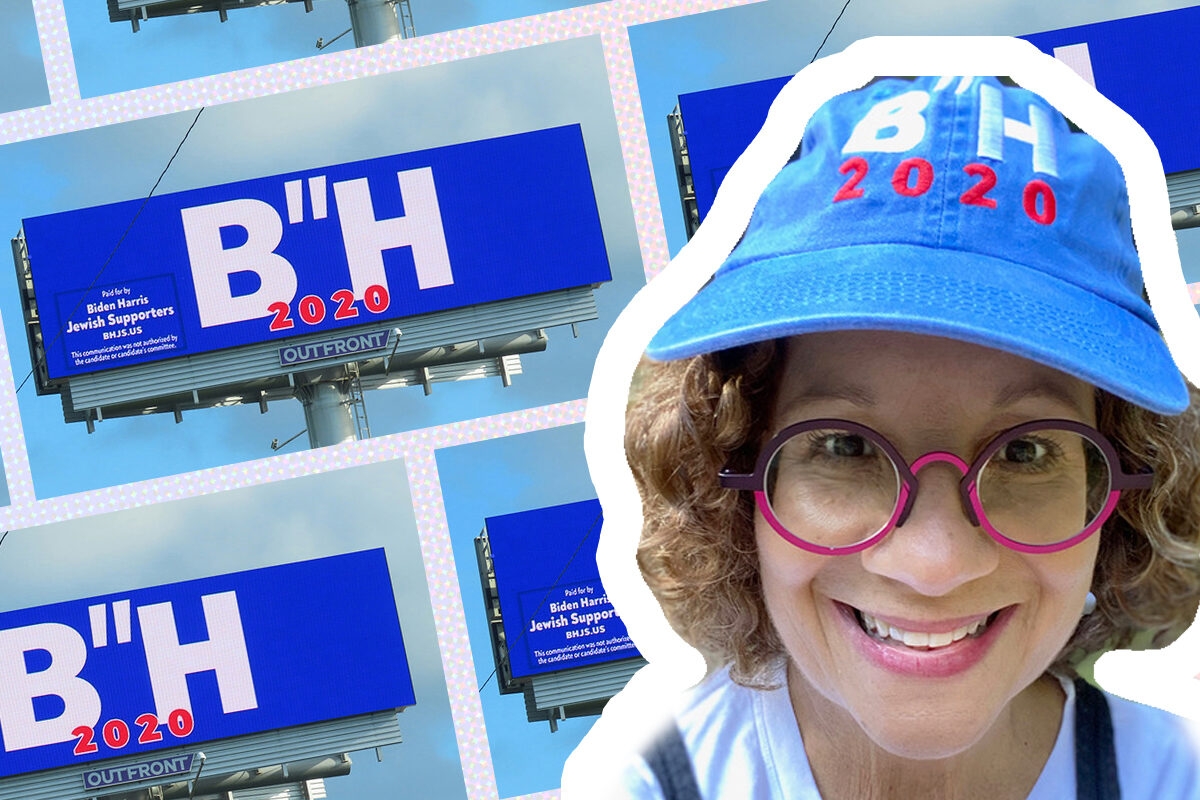 “My fantasy was sort of like, somebody driving down I-95 and saying, ‘I saw a sign,'” Jeanette Kuvin Oren tells me over the phone. “Literally, I saw a sign [from God]. And the sign is that Biden and Harris are going to be better for America, better for the world, and therefore better for Israel.”

Against all odds, Oren made that fantasy a reality: The Jewish grandma paid for three large billboards with a very Jewish Biden Harris logo, placed in key communities along South Florida’s I-95 corridor: Boca Raton, Hollywood, and Miami. The signs simply say “B”H” in big, red letters — it’s an abbreviation that stands for Biden-Harris as well as the Hebrew sayings Be’ezrat Hashem (“with God’s help”) and Baruch Hashem (“Bless God”).

Oren, who spent most of her life as a prolific (and apolitical) creator of Judaica, designed the logo after Joe Biden announced that Kamala Harris would be his running mate. The deeply Jewish artist, who grew up between Florida and Jerusalem, said those Hebrew invocations were the first thing she thought of when she saw their first initials together.

Oren, who has two grandkids, created a line of merchandise with the logo she designed in order to help raise money for the Biden-Harris campaign. She raised about $6,000 dollars — a pretty amazing feat. But even after all that, she felt there was more she needed to do.

Oren, who grew up in Palm Beach, became frustrated after hearing her family in Florida talk about the election. “Family members were saying, in certain parts of the communities in Boca and Miami, they couldn’t say anything about Biden, because they would get just yelled at by all the people who would say, ‘But Trump is so good for Israel,'” she says.

Four years ago, Oren says she’d let comments like that slide. But no more. “We can’t afford to just be quiet,” she says.

And so, she’s focusing all of her energy on South Florida’s Jewish voters. Combining funds from her merch sales with donations from a GoFundMe campaign — where she’s raised over $20,000  — Oren paid for the three billboards. And then, a stranger who saw the signs on the interstate paid for two floating boat billboards that are plying the waters of Miami. Oren’s next move is to print a full-page ad in the local Jewish newspaper.

Some of the feedback Oren has received hasn’t been too pleasant, to say the least. “These are Jews who say that I am a self-hating Jew,” she says of her detractors. “And they use a lot of curse words. And they say you can’t call yourself a Jew if you aren’t for Trump. And I expected it. I’m not surprised by it.”

But Oren says that’s just a small portion of the responses. “Overwhelmingly, the feedback has been positive,” she says. “I’ve had people you know, go home, look up the email address [on the billboard], and write, ‘Thank you, thank you for your support we needed in Boca, we needed in Hollywood’.”

And the positive responses don’t just come from Jews, she says. They come from other Democrats and even Republicans who support Biden in the state. “They love the message because it speaks to anybody who wants God’s help to win the election,” she says.

By and large, Jews in Florida support Biden. According to a poll released this week from GBAO Research + Strategy, Biden leads Trump among Jews in the state by 51 percentage points, with 73% supporting Biden and 22% Trump. Those numbers are on par with Jews across the country — according to a recent poll from the American Jewish Committee, support for Biden among Jews is 75% to 22% for Trump.

These numbers are different within the Orthodox community, however, where support for Trump is skyrocketing. According to a poll published by Ami magazine and conducted by an unaffiliated research firm, around 83% of Orthodox Jews plan to vote for Trump in the presidential election, and only 13% said they would vote for Biden. There are large communities of Orthodox Jews in South Florida, which boasts one of the largest Jewish populations in the country, after New York and California.

Oren, whose family is half-Israeli — growing up, she spent her summers in the Jewish state — says that she agrees Trump’s moving the U.S. embassy in Israel to Jerusalem “was the right thing.”

“Every other president said they were going to do it, none did it,” she explains. “Great. He did it. But that does not earn our undying loyalty for all the bad things he has done.”

“I just keep thinking ,’If I am only for myself, what am I?’ — that’s Rabbi Hillel,” she explains. “We can’t just say, ‘Thank you for moving the embassy and I’ll overlook all the racism and the hatred and the whole world looking badly on America.'”

Oren says she has Jewish friends who support Trump. “These are good friends, very good friends, and Jewish leaders in the community,” she says. “I don’t understand how, on one hand, they can preach ‘love thy neighbor’ … How does that in any way connect to what we’re experiencing those last four years?”

“I think some people can’t be convinced,” Oren admits. “But there are a lot of people in communities that feel besieged and need to know when they go in the voting booth, nobody’s gonna know what they did, and know that they have got to change what we’re experiencing now.”