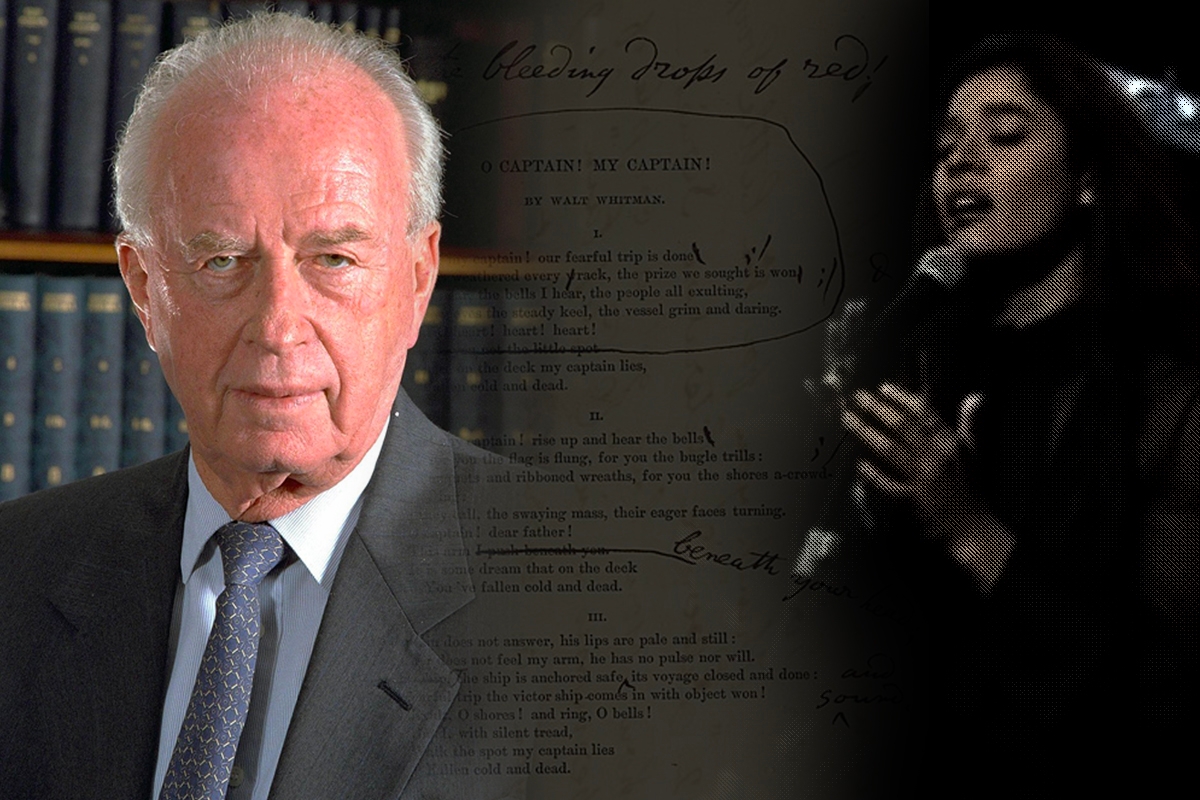 Today marks the 26th anniversary of the death of Rabin — according to the Jewish calendar, that is. On Nov. 4, 1995, the prime minister was murdered by Yigal Amir, a right-wing extremist, as he was leaving a peace rally in Tel Aviv at what is now Yitzhak Rabin Square.

In the years since Rabin’s assassination, a reworked version of Whitman’s “O Captain, My Captain,” which was originally published on November 4, 1865, has become a symbol of Rabin’s death — a quintessential way for Israelis to mourn their departed leader and lament the cost of his fight for peace that never truly bore fruit.

The parallels between the abolitionist Lincoln, killed by a Confederate spy at a theater, and Rabin, the general turned peace-monger, who was killed for supporting the Oslo Accords, were seen almost instantly. A Hebrew translation of Whitman’s metaphorical poem — which turns the assassinated state leader into the captain of a ship, murdered after weathering dark storms — was printed in Hebrew in the Davar newspaper on Nov. 14, 1995, translated by Israeli poet Yonatan Ben Nahum.

But it was a different translation of “O Captain, My Captain” that swept the nation on the first anniversary of Rabin’s death. This one was written by Israeli poet Naomi Shemer, known for her classic “Yerushalayim Shel Zahav” (“Jerusalem of Gold”).

Shemer — whom many consider one of Israel’s greatest poets and lyricists — was actually a supporter of Israel’s right-wing politicians, and she disagreed with many of Rabin’s policies, including the Oslo Accords. After Rabin’s murder, however, Shemer had a change of heart. Shemer’s daughter, Lali, who was her political opposite, said of her mother, who died in 2004, “she saw Rabin the character and not the politician.”

Following the first yahrzeit of Rabin’s death — in which Shemer read an original poem, calling Rabin “a man for whom every day of his adult life was service” — Shemer was asked to create a song memorializing Rabin for a nationally televised event commemorating the one-year anniversary his assassination.

For that purpose, Shemer re-translated “O Captain, My Captain” into Hebrew in 1996. She took liberties with the translation, turning its uneven six verses into four rhyming ones of equal length. She also composed a melody, full of pathos, for the classic poem and fashioned its second verse into a somber chorus.

Shemer’s song premiered at the event, performed by Israeli singer Meital Trabelsi. The emotional and powerful performance instantly catapulted Trabelsi, who was in her early 20s and virtually unknown, to fame.

Movingly, in 2015, Trabelsi told Walla! she had actually been at the rally where Rabin was killed. At the time, she was living in an apartment not far from the square and recalled sitting at home, crying, and unable to move after she learned the tragic news. One year later, at the ceremony — where she sang the song in front of a still mourning nation — Trabelsi recounted what it was like to stand in front of the Rabin family, their faces brimming with tears as she sang.

In the decades since that terrible day, Shemer’s song has become an indispensable part of yearly memorial services to the slain leader, which are held at schools across the nation. Young children get up on stage to sing it with somber expressions. The poem also wove its way into the Israeli education system, as part of the study materials for the Israeli literature Bagrut tests (matriculation exams) which high schoolers take each year.

It has been 25 years since that first anniversary of Rabin’s death — and yet, this translation of this poem, now more than 150 years old, still manages to transport so many of us to those early days of grief and shattered hope. May Rabin’s memory be for a blessing, and may Shemer’s be as well.