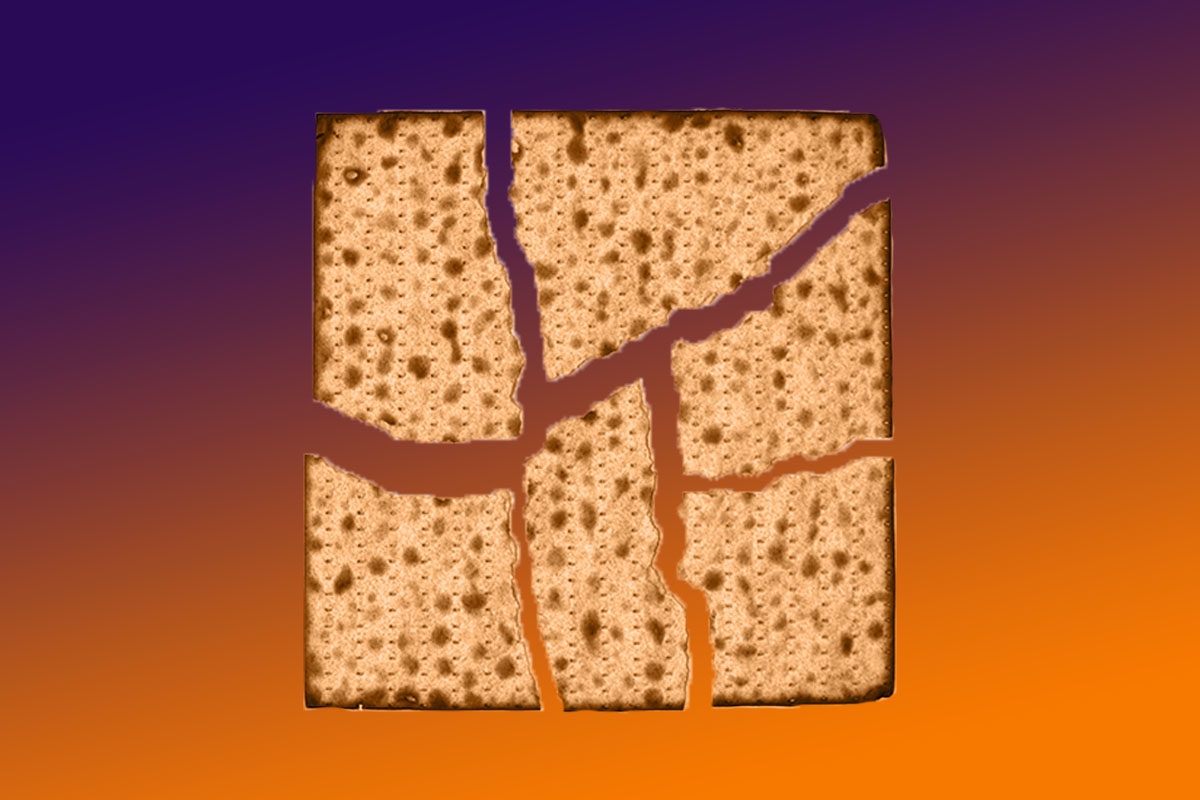 The jar is ceramic and squat. It’s powder blue, with pink painted flowers.

It might be worth 25 cents or $2,500 — but it doesn’t matter. In my family, the jar is absolutely priceless. Why? Well, this jar, which once belonged to my great-great-grandmother, holds our yearly stash of a treasured Passover family recipe: farfel toasties.

Now, farfel toasties may or may not be unique to my family, but in all my years on the planet, I’ve never encountered them elsewhere.

The recipe, such as it is, is super-simple. Essentially, you coat matzah farfel (which is itself simply broken-up bits of matzah) with cholesterol (oil, egg yolks, and salt), bake it on a cookie sheet, and then break the resulting mass into pieces. It’s sort of like a kosher-for-Passover granola in appearance, but they’re salty and crunchy — kind of like crackers, but with their own unique flavor (thanks to the egg yolks, I guess). They are highly addictive. Our family puts them in soup on Passover in lieu of croutons, and we also make sure to snatch some plain at every opportunity (and subsequently yell at each other for doing so and depleting the supply).

Farfel toasties, like the farfel toasty jar, are highly sentimental. Perhaps knowing that several generations have served farfel toasties in that jar is what infuses the toasties with the flavor our family loves so much.

My great-grandmother, my grandmother, and then my mother would make farfel toasties every Passover and store them in the jar. The fact that my mother makes them says something about their sentimental value: She’s the only family member, as far as I’m aware, who doesn’t like them – yet she wouldn’t let a Passover go by without them.

Now that I am grown and often make Passover seders myself, I also make farfel toasties. The first year I did it on my own — I was too far along in my pregnancy with my fourth child, who’s now nearly 5, to travel — the farfel toasties recipe was the first thing I asked for from my mom.

These days, it’s one of the first things I make each year, relishing the scent of Passover in the air as they brown in the oven. My husband doesn’t fully appreciate them — I guess he’s missing that emotional attachment that makes them taste even better — but that’s not the important part. What I really love, in addition to eating them myself, is sharing a multi-generational devotion to farfel toasties with my own children.

My oldest, who was born just a week before Passover 14 years ago, has always felt a deep attachment to relatives and family history, and she took to farfel toasties as soon as she was old enough to sample them. She’ll be the first to tell you that it’s not just the toasties themselves, but the connection they offer to a grandmother she loves, a great-grandmother she barely remembers, and others she knows only as names on the family tree.

Her younger siblings — the almost 5-year old sister, a 9-year-old brother, and an 11-year-old brother — don’t gravitate to ancestry the same way, but they still love the toasties. And they snatch them plain, and yell at each other for it — just like their mother and aunts before them. Tradition!

The farfel toasties jar lives at my mother’s house; my farfel toasties, by contrast, spend their (very brief) lives in Ziploc bags. And I hope the jar will remain in my mother’s possession for many years. Still, when the time comes, the jar is the only specific item to which I’ve staked a claim over my sisters. That jar represents years of sharing seders with my grandparents and even great-grandparents, years of warnings each time anyone picked it up that we’d better not break such a priceless heirloom. It represents a lifetime of family Passover memories, and a tangible way to pass those memories on to my children.

I don’t have very many objects that belonged to my great-grandparents, or even my grandparents. Of those I do have, most are just random serving dishes; I don’t even remember which ancestor they belonged to. It’s rare to be able to say, “This is how Zayde used that item; this is what he said about it.” I cherish farfel toasties not just for the taste but for the sense of family tradition. I cherish the fact that my children know to warn each other not to break the jar when we’re at my mother’s house, and that the warning has to include reminders of how old it is — that it’s older than they are, older than I am, older than any ancestor they’ve been privileged to meet in this world — just like my grandfather warned my siblings and me when we were little. It’s a joke my family shares across all boundaries of age and even death.

Like many, our Passover plans changed this year because of coronavirus. We were going to host my in-laws for the seder — for the first time — which would have given me the opportunity to introduce them to farfel toasties. We were then supposed to visit my parents for the last days of the holiday; my mother and I would have discussed our respective farfel toasty supplies, and I probably would have packed a backup batch to add to the jar. My mother would have relished seeing her grandchildren snatch them, even though she rebuked my siblings and me when we did it. She would have laughed to hear them talk about how old the jar is.

It’s hard to think of my parents on their own for Passover, and it’s hard to lose an opportunity for my kids to bond with their grandparents. But there is also some comfort in knowing that wherever we are, there are traditions that keep us together. My parents, my sisters and their families, plus my mother’s two brothers and a whole slew of cousins will all be enjoying farfel toasties this Passover (or, at least, talking about their absence). My mom may be the only one in possession of the jar, but we all hold that family tradition — and each other — wherever we are.

1. Line a jelly roll pan with foil. No need to oil or spray it.
2. Mix all ingredients together, then spread flat in the lined pan.
3. Bake at 350 degrees for approximately 15-20 minutes, until they’re sort of golden brown. (They might also look sizzly, with bubbles; that will settle as they cool.)
4. Let cool and then break up with hands.

Note: If you’re cooking for more than one person, this amount will not go far! I always quadruple the recipe for my family of six: 4 cups farfel, 8 yolks, half a cup of oil. I don’t quite quadruple the salt; my mother recommends a teaspoon.