10 Unique Items to Add to Your Seder Plate 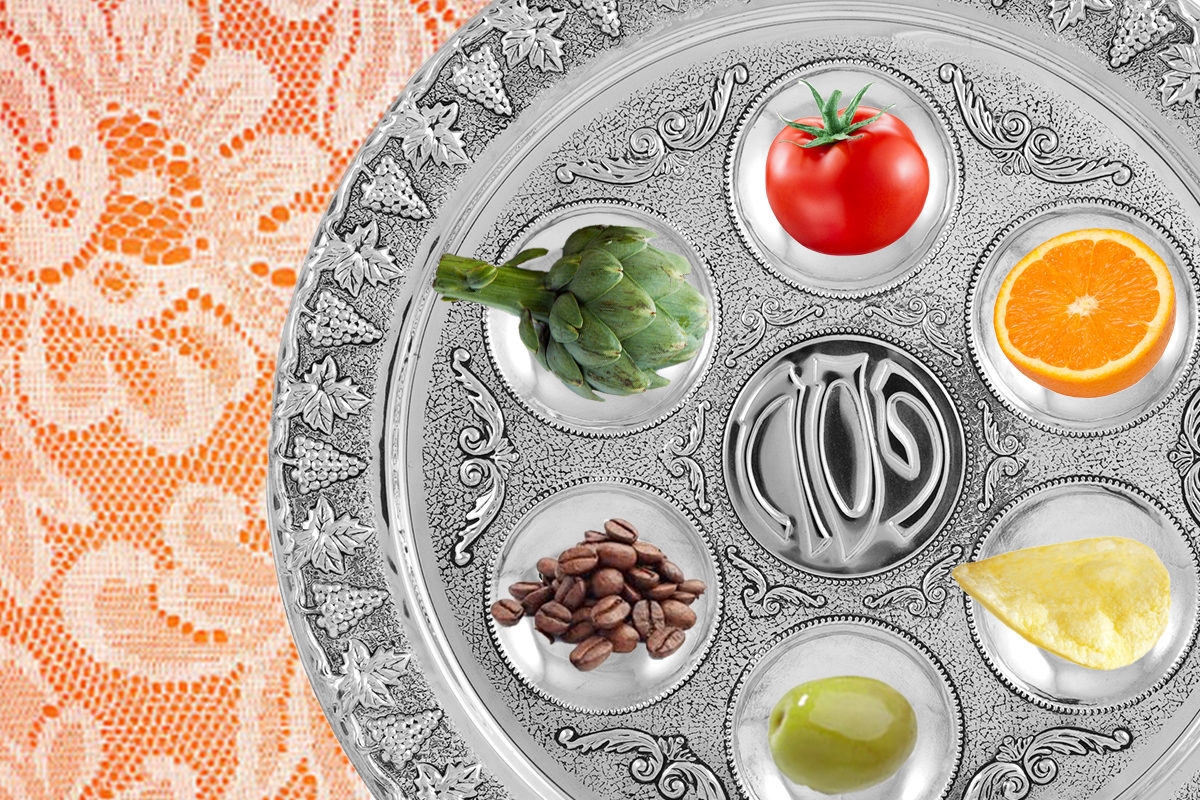 Next to matzah, the seder plate is the iconic symbol of Passover.

It holds six items that symbolize an aspect of the Israelites’ exodus from Egypt. It’s designed to help us imagine ourselves in our ancestors’ shoes — not only are we supposed to tell the story of Passover, we’re supposed to see, smell, taste, and feel it.

As traditional as the seder plate may be, there’s actually room for some creative flourishes. While most Jewish households stick to the classic six items mentioned in the haggadah — shank bone, egg, two kinds of bitter herbs, vegetable, and a sweet fruit paste called maror — you can also view these items as mere suggestions or starting points.

Why? Well, while Passover is about the Jewish liberation from Egyptian slavery, many people also use the holiday as a way to acknowledge and honor modern liberation struggles. These days, it’s common to see unusual objects on seder plates used to represent marginalized voices, calling attention to issues like LGBTQ inclusion and the plight of present-day refugees.

From bread crusts to oranges, new items are introduced every year. If you’re looking to add a modern twist to this ancient tradition, consider adding one (or several!) of these extras.

This is perhaps the most well known non-traditional food used to symbolize oppression. Inspired by the bread crust, aboe, Jewish studies professor Susannah Heschel added an orange to her plate for all LGBTQ+ Jews. “Bread on the seder plate brings an end to Pesach — it renders everything chametz,” Heschel once explained. The professor asked everyone at her family seder to take an orange slice, make a blessing over the fruit, and eat it to show solidarity with lesbians, gay men, and all Jewish community members that are marginalized. Next, the participants spit out seeds from the orange as a symbolic act of rejecting homophobia in Judaism.

The most delicious unique addition to the seder plate has got to be chocolate. In 2011, Fair Trade Judaica launched a campaign to shine a light on forced child labor in the chocolate and coffee industries. In partnership with Fair Trade Judaica,  advocacy group Global Exchange created a haggadah supplement to be used after the Maggid, and before blessing the matzah, bitter herb, and charoset.

Leader: Once, we were slaves in Egypt.

Leader: Just as Moses grew up in the house of the Pharaoh, we have influence over those who exploit children in the cocoa fields.

Assembled: We can walk in Moses’ footsteps. We can have the courage to ask the Pharoahs of today to let the children go.

A photograph of a young boy, face planted on a Turkish beach, clothes sopping wet, rocked the world in 2015. Aylan Kurdi and his brother, Galip, were victims of the Syrian refugee crisis, and to honor them — along with thousands of other refugees — Rabbi Dan Moskovitz called for placing a banana on the seder plate, commemorating a tradition in which the boys’ father would bring them a banana to share every day. According to Moskovitz: “We place a banana on our seder table, and tell this story to remind us of Aylan, Galip, and children everywhere who are caught up in this modern day exodus. May they be guarded and protected along their journey to safety, shielded by the love of their parents, watched over the God full of mercy and compassion.”

At a local CVS, Rabbi Wesley Gardenswartz saw a sign asking customers to buy bags of cashews to send to troops in Iraq. One of the employee’s sons was abroad in the war, and explained that cashews provide sustenance and hydration in Iraq’s dry climate. To honor the troops, Rabbi Gardenswartz called for adding cashews to the seder plate.

When Ethiopian Jews were brought to Israel via Operation Solomon in 1991, they were famished. In fact, they were so ill and emaciated that they couldn’t stomach a substantial meal — instead, doctors fed them boiled potatoes and rice. To represent the continuous exodus of Jews from oppressive regions, it’s become customary to place boiled potatoes alongside the green vegetable — karpas — we dip in salt water.

The olive branch is famous for being the symbol of peace. As such, olives were introduced to the seder plate as a symbol of hope for a future peace between Israelis and Palestinians.

The Jewish community is made up of people of all colors, cultures, and levels of religiosity. However, in some circles, interfaith marriages have remained somewhat controversial. Rabbi Geela Rayzel Raphael suggests introducing a thorny artichoke to the seder plate to represent the some Jews’ qualma with interfaith relationships: “Let this artichoke on the seder plate tonight stand for the wisdom of God’s creation in making the Jewish people a population able to absorb many elements and cultures throughout the centuries — yet still remain Jewish.”

Inspired by her visits to Florida, where she met with underpaid and overworked tomato pickers, Rabbi Paula Marcus, a member of Rabbis for Human Rights, decided to introduce the tomato to her seder plate. “We imagine what it was like to be slaves and celebrate our freedom,” she wrote in Jewish Week. “But the truth is, there are people in our own country who don’t have to imagine what it is like to be a slave.”

If you want to scrap the traditional seder plate items for a whole new set, the Progressive Jewish Alliance has you covered. The idea of their “Food Desert Seder Plate” is to use foods that symbolize the lack of access to fresh, healthy food in low-income neighborhoods. For example, swap out haroset for rotten lettuce to symbolize the spoiled produce inner-city grocery stores carry. A potato chip is used for karpas to illustrate that greasy, high-fat chips are easier to find than fresh potatoes. Lastly, there is no egg on the seder plate: “Fresh eggs are one of the luxuries lacking in these neighborhoods.”